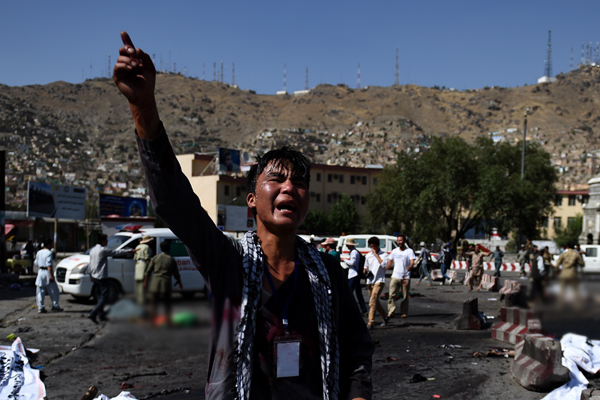 At this point in time, let us be clear about some things. The victims in this case are the Shia Hazara Afghans. The perpetrators are Takfiri Deobandi terrorists. They are not the only culpable group. The Pakistani establishment that nurtured these Takfiri terrorists are also to blame just as the Afghan government that is systematically denying electricity to Shia Hazara areas. This was the reason for the protests that were then subsequently targeted by Takfiri terrorists.

So us be clear about the most important thing. That spilling innocent Shia Muslim blood from Indonesia to Nigeria and from Belgium to Australia has no shortage of apologists. Western and Gulf propagandist networks like Al Jazeera and CNN consistently peddle the dishonest Sunni vs Shia binary which in essence sanctions ‪#‎ShiaGenocide‬.

In the last month alone, close to 500 Shias have been killed in just 2 terrorist attacks in Iraq and now Afghanistan and yet there has been no honest and sensitive analysis of not just the virulently anti-Shia Takfiri strains. Those who obfuscate #ShiaGenocide and rationalise it by peddling dishonest binaries have also been given a free pass. From the Jibran Nasirs to the CNN pundits, those who rationalise #ShiaGenocide by peddling False moral binaries have been given a free hand.

This will not stop until Shia Muslims regain their sense of community. They need to stand up to those who sell their blood and then turn around to spit on their cause. Shia Muslims need to take ownership of their own advocacy instead of outsourcing it to dubious NGO types and failed rent-a-cause leftists. They need to work on global opinion and ensure that the lexicon of #ShiaGenocide that was developed literally with the blood, sweat and tears of sacrificed LUBP editors is not ignored or obfuscated.