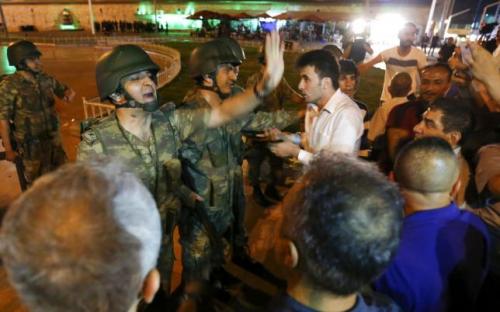 The failed long march/dharna by Imran Khan last year was as dangerous for Pakistan as is the failed coup in Turkey. The results in AJK are clear indication that just like Turkey Pakistan’s urban middle class now has complete power over the rural lower middle class and poor. PPP who used to have a significant vote bank and jiyalas in AJK and whose leader Bilwal Bhutto went two steps ahead to appease military establishment by criticising India and Modi on Kashmir, is almost washed out in AJK.

And there is no doubt that in the next general elections there won’t be any slight resistance from any quarter and establishment party will have open field just like in AJK, they will not require any suicide attacks, or target killing in order to win the 2018 elections.

This strengthens my theory that the takfiri Islamist axis of evil between Pakistan, Turkey and Saudi Arabia will unleash its full power by 2020. I keep saying that takfiri Islamism is not only capable to start the third world war but also capable to end human civilisation. The evil forces like ISIS and Taliban are just one manifestation of takfiri Islamism and luckily these forces are not resourceful enough and they don’t have enough skilled manpower. But wait for the next manifestation of the same takfiri Islamism, as Javed Ghamdi keeps prophesying in which Takfiri forces have not only complete control over the country and have ‘democratic’ mandate behind them with the skilled man power of their armed forces and then on top of all that add the nuclear arsenal and you will get the horrifying picture of third world war.

As Erdogan is getting the full fascist control over Turkey and Saudi Arabia being pressed from all quarters (be it secret 911 report telling the role of KSA in 911 or EU increasing ties with Iran) to remove her mask and stand behind ISIS openly and Pakistan falling into dark alley of extremism where slowly and gradually all resistance against extremism is dying (I insist that absence of terrorist activities suicide bombing are actually the indication that resistance against takfiri forces is vanishing).

It pains me so much that when 500 million Muslims of India and Bangladesh would be standing behind them the allied forces against the takfiri forces, my countrymen would either be fighting for takfiri forces or would be hostage to them. Reading history of second world war I come across several kind hearted German civilians and sometimes even Nazi soldiers who would feel the pain but won’t be able to do anything.

But I don’t lose hope I wish and pray that the people of Bhittai, Daata, Khwaja Farid, Khusroo and Baba will rise against these dark forces, I can assure that it would only be the people of Pakistan who would save the world when such a scenario occurs. I posted the other day how Turks are considered as the most savage in Europe, they carry the thousand year baggage of atrocities and killing, and despite all efforts by the likes of Mustafa Kamal Pasha, Turks can not get rid of their old habits as we see now in Erdogan. And Saudi Arabia we all know is the epicenter of the takfiri Islamism, it is only people of Pakistan who stand on the 4000 years old civilisation which might with stand the dark forces with the help of Indian and Bangladeshi people. (May be I am being carried away by my optimism.)