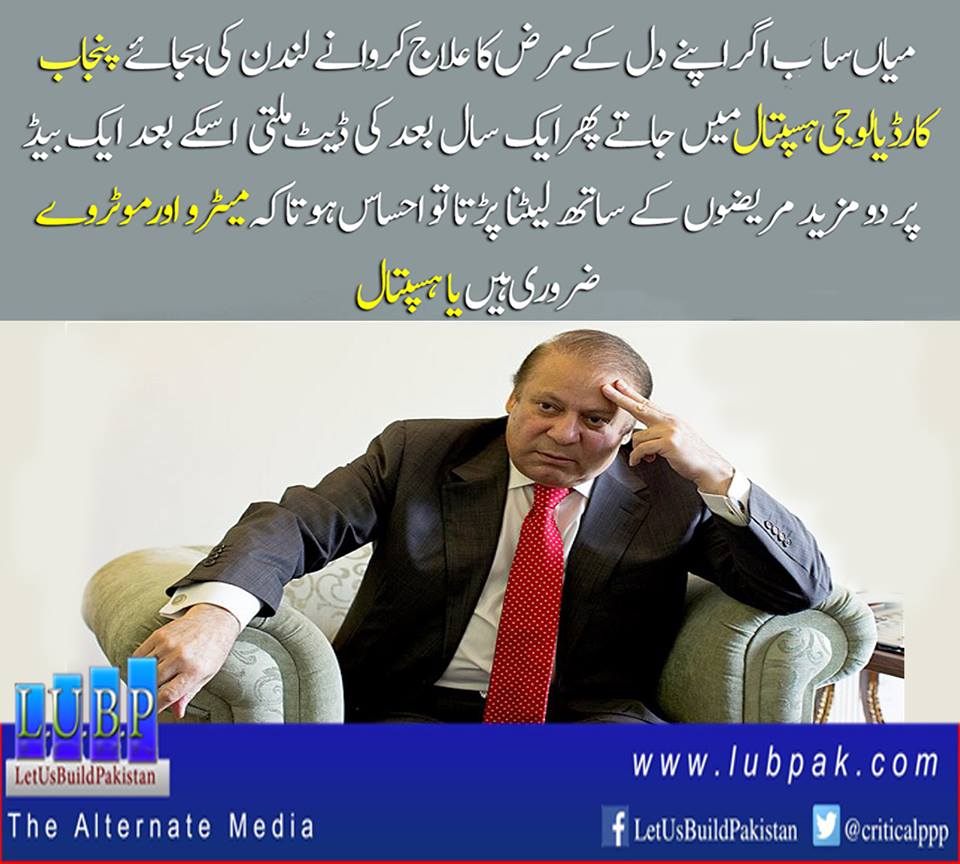 Do take a look at the fanboy New York Times piece (With Heart Surgery Done, Nawaz Sharif to Return to Pakistan, June 1st, 2016) by Salman Masood regarding Nawaz Sharif – even a party insider could not have written a better sycophantic puff piece.

Prime Minister Nawaz Sharif is the envy of every gourmand and it is a wonder he went this long without a coronary bypass. During a crucial meeting with the army in the late 1990s, he was too busy with the sandwiches to counter General Musharaf’s irresponsible and damaging military action in Kargil. When the same Kargil “plan” was earlier presented to the late Benazir Bhutto, she squashed it.

When the fit hit the shan, PM Nawaz Sharif ran away to the US to bail himself out of the mess created in significant part by his own ineptitude and spinelessness in not standing up to an over ambitious general. After he was thrown off in a military coup, Nawaz Sharif then ran away to Saudi Arabia and only returned after bribing the Judiciary to lynch his political rivals while saving his favourite Salafi and Deobandi Jihadists.

The New York times piece by Salman Masood is bordering on bs when it talks about the legal troubles of Nawaz Sharif who was actually convicted. The same judges who convicted him then pledged allegiance to General Musharaf on multiple times – until ISI’s General Kiyani and Nawaz Sharif engineered the Liars movement as an opportunity for compromised judges to white wash themselves. After returning back in violation of his deal with General Musharaf, Nawaz Sharif first used the foolish PPP to sideline Musharaf. He then used his Pro-Taliban judiciary to hound the PPP government during the rest of their tenure. While PPP was far from blameless, Judicial “activism” during their time and during Nawaz Sharif’s current tenure reveals the obvious prejudice.

The current Judiciary has “stayed” Nawaz Sharif’s conviction, not overturned their own dubious ruling. More importantly, both the “anti establishment” Pro Taliban Nawaz Sharif and his spineless Judiciary have failed to try General Musharaf and their own Judicial and PML N turncoats on the crucial matter of the 1999 military coup. This was the military coup that lead to 8 years of quasi martial law.

Any other leader would have had some shame when his talentless and over-previleged kids would be exposed globally with assets worth tens of millions of dollars and traced back to a time when their billionaire daddy was paying zero taxes in Pakistan.

A more responsible media and a less compromised Judiciary – not to mention a more intelligent (PTI) and principled (PPP) opposition would have held the corrupt and dynastic Nawaz Sharif regime to greater account. While undergoing crucial heart surgery, Nawaz Sharif appointed his daughter’s father-in-law and his alleged partner in financial corruption as the interim head of government. No debate in parliament, no informing a nation of 200 million. It is because of such crony capitalist and self righteous Jamaatiyas like Nawaz Sharif that Pakistan is still struggling to assert itself.

Some deluded (?) folks refer to this Saudi establishment stooge Nawaz Sharif as “anti establishment”. Not once has Nawaz Sharif stood up to Pakistan establishment’s policy of still supporting some sections of the Taliban and other Deobandi and Salafi Jihadists. On the contrary, Nawaz Sharif is more loyal than the king when it comes to these Jihadists when senior members of his PML N party like Rana Sanaullah, Shabbaz Sharif (brother) and Chaudhary Nisar Ali Khan continue to openly support the Taliban.

In his last tenure, Nawaz Sharif publically praised the Taliban wished to implement their totalitarian dystopia in Pakistan. This time around, when he is not busy stuffing himself and his bank account, Nawaz Sharif ensures that the Taliban, Al Qaeda and other Jihadists who won the last elections for him, are saved from capture and prosecution.