Khurram Zaki and his unapologetic activism 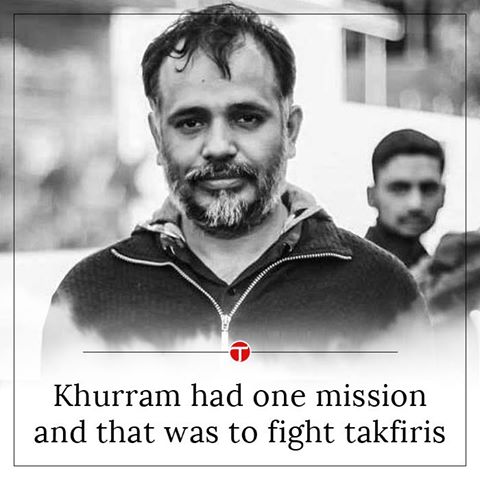 Unlike some Sufyani liberal elite opportunists and their Uncle Tom apologists, Zaki and his LUBP did not compromise on their clear discourse. He clearly and specifically named the groups (Sipah Sahaba/ASWJ-LeJ/Taliban) and the radical Deobandi ideology that is common all these groups that have claimed the lives of 70,000 Pakistani citizens and soldiers.

Few of the people who abandoned and betrayed and misrepresented and slandered Khurram Zaki and his work from the LUBP platform while he was alive are now shedding crocodile tears at his death. Their slander was not much different from the daily attacks on the late Khurram Zaki and his LUBP by Deobandi hate clerics like Tahir Ashrafi and Mashal group. These few pedlars of disinformation and compromise cannot see beyond their pay checks and sycophancy to the Saudi establishment stooge government of Nawaz Sharif.

Their number pales in comparison to the thousands of Pakistanis whose hearts were touched by Khurram Zaki. Please refer to what Shan Taseer, Hamza Ali Abbasi, Syed Ali Abbas Zaidi پیجا مستری Imran Khan, Awab Alvi, Lefist parties and trade unionists and religious leaders belonging to Sunni, Shia and Christian communities have said about him. Please also go to the LUBP site and Facebook page to access the various videos of Khurram Zaki.
The man was a true Hussaini!

He was a Shia Muslim who, unlike some elites, did not believe in compromising and ridiculing his beliefs to gain acceptance in the air-conditioned drawing rooms of life style liberals. He refused to pander to populist based activism and spoke the truth. Deobandi and Nasibi ideologues like the Pro-Yazeed Israr Ahmad was trounced in a public debate by Khurram Zaki a decade ago. Radical Deobandi clerics from ASWJ-LeJ feared to debate him. His religious knowledge was far superior to drawing room dars peddlers that are in vogue these days. And then when he spoke, Khurram Zaki literally stood up to hordes of raving froth Sipah Sahaba fanatics by standing up for not just Shias but also Sunni Barelvis, Hindus, Ahmadis and Christians as each of these communities faces genocidal violence at the hands of radical Deobandi terrorists.

Unlike some well funded opportunists who mix truth with fiction, Zaki refused to pander to the False binaries that are used to obfuscate ‪#‎ShiaGenocide‬ in Pakistan.

His loss is incalculable.