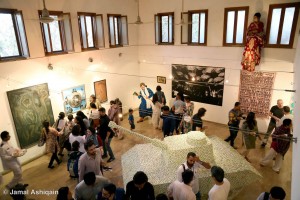 The 1970s began with the bloody loss of East Pakistan and ended in a military coup and the imposition of martial law. Yet, it generated a vibrant cultural era. With a booming television and film industry, flourishing tourism, cafes visited daily by intellectuals, radical feminists and progressive students, the 70s played an important part in the country’s history as it exuded a more progressive, tolerant and joyful Pakistan.

Today, while many reminisce about those bygone days, for the post 80s generation most stories of a more moderate and liberal Pakistan have been passed down from their parents and elders. In the exhibition titled ‘The 70s: Pakistan’s Radioactive Decade’ curated by Amin Gulgee and Nilofer Farrukh at the Amin Gulgee Gallery, we were invited to relive the past through the eyes of forty-five artists. The cross-medium selection of art works which included paintings, sculptures, photographs, digital works, video and performance art all evoked a strong sense of nostalgia.

At the entrance of the gallery Adeela Suleman’s chandelier, made up of red disco lights, played on contradictions between a thriving culture and the brutality of war. Posters reading “Princess Nadia is here” by Nadia Batool were plastered everywhere, paying tribute to cabaret dancers and the flourishing stage productions of the time. Muhammed Zeeshan’s, vibrant green LED text that read “Samajhdaar Logon Ki Whiskey” was a tag line used in the 70s for the famous Johnny Walker Whiskey advertisements. It is a phrase rich in meaning, especially after the ban on alcohol – which still holds today – posing the question: Can only ‘wise’ people drink whiskey?

Art works and performance artists were everywhere, only to be outnumbered by visitors.  Amidst all the commotion was a wandering performer – Sunil Shanker – dressed in a white sari and army boots with a rifle on his shoulder. Like a ghost frozen in history, he represented the Bengali women who came out on the streets to protest against the atrocities committed against them during the war.

Omer Wasim’s brutally stark and haunting sculpture, Untitled (“Bearing Witness”) was a hollow cube made of concrete brick, its narrow opening facing a wall. It resembled a makeshift space often seen at construction sites in residential areas. An immersed, tapered light box, highlighting hand written text outlined the flooring of its disheveled interior.  Inspired by the trauma of the 1971 war experienced by his father, Wasim sought to construct a space that could house his memories. Heavily layered in meaning there was an overlay of memory and post-memory assembled through the power of narration and the imagination. The work as a whole is a disconcerting space that is an image of memory and its emphatic muteness is the appropriate response to the severity of its subject.

In the same room was filmmaker Jamil Dehlavi’s angular light box installation titled Zuljanah. Zuljanah was the sacred stallion ridden by Imam Hussain during the battle of Karbala. Using stills from his film The Blood of Hussain, the work depicts, through a sequence of motion, a beautiful white stallion rising out of the earth to seek a new rider. The work establishes an interesting relationship between the static and moving image, while also investigating the intersection of sculpture and digital media. With a slight fuzziness typical of film stills and the glow of the light box, observers were confronted with an image that takes material evidence and translates it into something dream-like, utopic and sublime – an image that perhaps exudes a feeling of reassurance. The work is reflective of the filmmaker’s personal experience during the decade, which saw his film being banned by the then military ruler General Zia-ul-Haq, forcing him into self-exile.

A few artists appropriated objects of nostalgia such as a black telephone, a box TV and red post boxes. While these suggested the ‘look and feel’ of the past, they generated poetic and multi layered undertones. Aab-e-Gum, was an audio installation set up at a quiet end of the gallery’s courtyard. An old transistor radio arranged on a table with two chairs on either side, played Bangla war songs from the 70s that were most likely never heard in Pakistan during the dreadful months that led to civil war and separation. This installation was a mnemonic device which connected us to buried aspects of our distant collective past.

Benish Mahmood’s video presentation Touch me not Bashariya was comprised of archival, black and white snippets of newspaper clippings, pop songs, cinema productions and posters. It was a sing-along, thought provoking compilation curated in a manner that reflected not just the elegance and growth of the film and television industry but also the progressiveness and exuberance of a nation that is still reeling from past events.

Aamir Habib also made use of a period object, an old box TV made out of acrylic, metal and LED lights, placed at eye level on a stand. PTVs ubiquitous ‘Intizar Farmaye’ veils and unveils itself as viewers are forced into close mental and physical proximity with the work, creating a kind of in-between zone that mediates between our past and present. Sputtering, as its title suggests, is not a nostalgic or an outdated object embedded in history but a metaphor for that which is uncertain, volatile and on the edge of failure. The text ‘Intizar Farmaye’, signaling a profound melancholia shot through with a hint of optimism, is very relevant to current times.

A number of works returned to the gallery after long absences. These were spectacular paintings by Sadequain, Bashir Mirza, Jamil Naqsh and Ismail Gulgee. The exhibition in its entirety showcased the now and then, two dimensions and three, simplicity and complexity, art and life.