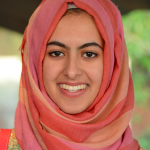 Marium’s perfect score on the SAT (2400/2400) is indeed a matter of great pride for all Pakistanis. Out of approximately 2 million students who take the SAT around the world, only a handful (less than 0.01%) achieve a perfect score. Marium is a junior at Redmond High School in Western Washington.

Marium is interested in genetics and human health, and wants to major in something along those lines. In conjunction with biology, she is also passionate about anthropology and the social and ethical aspects of biology. In the future, she wants to blend her interests in these two fields.

She has volunteered at Virginia Mason Hospital in Seattle, since last September. As a volunteer, she ran the concierge cart. She traveled throughout the hospital, delivering items that patients may need in their hospital stay, such as cell phone chargers, DVD players, books, magazines, etc. Every interaction with a patient has been personally valuable for her, and also very humbling.

Virginia Mason is a shocking contrast with the hospitals she has observed in Pakistan. Hospitals in Pakistan are lacking in facilities, organization, and overall patient care. The disparity between these two hospitals not only makes her extremely thankful that she lives in the United States, but also propels her to make a change. She hopes to one day make an impact to better those conditions in Pakistan.

Another club she is passionate about is Speech and Debate. She has been participating in Speech and Debate tournaments since 9th grade, winning regional awards. This year she qualified for state in the Extemporaneous Speaking event. Aside from that, she is an officer of Knowledge Bowl club, and is also part of UNICEF, Model UN, and Science Olympiad. Along with these clubs, she began contributing to the Blaze Newspaper this year.

Marium is also involved with the local mosque and community center and as a Sunday School teacher. She teaches Quran for children ages 9 – 12.