Syria Invasion: Obama Is about to make the biggest decision of his presidency 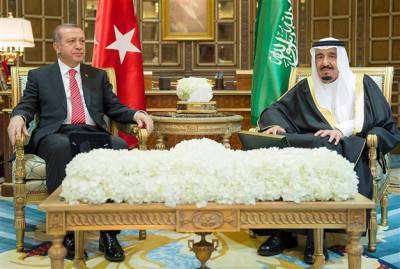 Exclusive: President Obama must decide if he will let the Syrian civil war come to an end with Russian-backed President Assad still in power or if he will escalate by supporting a Turkish-Saudi invasion, which could push the world to the brink of nuclear war, writes Joe Lauria.

With the Russian-backed Syrian army encircling Aleppo, cutting off Turkish supplies to rebels and advancing on the Islamic State’s capital of Raqqa, a panicked Saudi Arabia and Turkey have set up a joint headquarters to direct an invasion of Syria that could lead to a vast escalation of the war. And there’s only one man who could stop them: President Barack Obama.

It is probably the most important decision Obama will make in his eight years in office since a Turkish-Saudi invasion risks a direct showdown between Russia and NATO, since Turkey is a member of the alliance.

President Barack Obama, with Vice President Joe Biden, attends a meeting in the Roosevelt Room of the White House, Dec. 12, 2013. (Official White House Photo by Pete Souza). The U.S. traditionally has held tremendous power over client states like Turkey and Saudi Arabia. So, an order from Washington is usually enough to get such governments to back down. But Ankara and Riyadh are being led by reckless men whose continued existence in power might well depend on stopping a Syrian government victory – helped by Russia, Iran and the Kurds – and a humiliating defeat of the Turkish-Saudi-backed Syrian rebels, who include some radical jihadist groups.

Turkish President Recep Tayyip Erdoğan and Prince Mohammad bin Salman have shown increasing defiance of Washington. Neither man is the legal ruler of his respective country. But both have seized power nonetheless.

Erdoğan is technically in a symbolic post, a presidency without power. Prime Minister Ahmet Davutoğlu should be leading the country the way Erdoğan did when he was prime minister, but Davutoğlu is still letting Erdoğan call the shots.

Erdoğan is campaigning for a referendum that would make Turkey a presidential system to legalize the power he already has. But that hasn’t happened yet. So, he is simply acting as a de facto executive leader while potential rivals are afraid to contest his overreach of power.

Erdoğan’s increasing authoritarianism is alarming some people in Washington. He is routinely throwing in jail journalists and academics who dare criticize him. After a brutal crackdown in the Kurdish city of Cizre inside Turkey this month, leaving much of the city in ruins, Erdoğan has turned his attention to the Syrian Kurds.

They are among the best fighters on the ground against the Islamic State and are supported by both the U.S. and Russia. And they are threatening to formalize their de facto autonomy inside Syria, which Erdoğan has vowed to crush. By fighting the Islamic State, the Kurds are also messing with Erdoğan’s goal of overthrowing Syrian President Bashar al-Assad. Erdoğan has staked much of his power on overthrowing Assad. A Syrian victory against Erdoğan’s five-year project of “regime change” in Damascus could mean the end of him politically. Sensing this danger, Erdoğan has been increasingly belligerent toward anyone standing in his way.

Erdoğan showed his defiance of the Obama administration when he said, “How can we trust [you]? Is it me who is your partner or the [Kurdish] terrorists in Kobane?”

On Sunday, Erdoğan began shelling Syrian Kurdish areas in Aleppo province, especially the city of Azaz. “We will not allow Azaz to fall,” Prime Minister Davutoğlu vowed on Monday, reflecting Erdoğan’s hard line. Turkey’s attacks also are aimed at preventing the Syrian government from sealing the Turkish border where the Islamic State and other jihadist groups have smuggled across fighters, weapons and other supplies into Syria – as well as oil from Syria into Turkey.

With his aggressive strategies toward his neighbors, Erdoğan has been accused of wanting to establish a new Ottoman empire. Azaz is near Dabiq, the town where the Ottoman Empire began in 1516. Because of that symbolism, Turkey’s defeat there could mean the death of Erdoğan’s neo-Ottoman dreams and perhaps of his presidency. (For the Islamic State, Dabiq is the place where a future Christian-Muslim battle will take place heralding the end of the world.)
The Saudis appear equally spoiling for a fight. Prince Mohammed bin Salman is deputy crown prince, second in line to the crown. But his father, King Salman, is suffering from dementia and the current crown prince, Mohammad bin Nayef, 56, is considered loyal to the U.S. But 30-year-old Mohammed has launched the most independent Saudi military policy in the history of the modern Saudi state. He is said not to trust the United States. And as defense minister, he has recklessly launched a disastrous war in Yemen, where – despite widespread death and destruction – the most powerful Arab army cannot defeat the poorest Arab nation. Mohammed has staked his credibility on the outcome of the Yemen war. But he also has vowed to check Iranian regional influence. So, he may be going for broke now by threatening to invade Syria.

Turkey and Saudi Arabia have established a joint headquarters at Turkey’s Incirlik base, 62 miles from the Syrian border. Turkish Foreign Minister Mevlüt Çavuşoğlu told a Turkish newspaper last week that Saudi warplanes and troops would be arriving at the base.

The Saudis are also planning war games inside the Kingdom with 150,000 troops from 20 Arab nations. Jordan, however, sensibly said it would not take part in an invasion unless it is led by U.S. and British troops and has a U.N. Security Council mandate “with full coordination with Russia.”

However, the war clouds continued to darken along the Syrian border. On Sunday, Turkey began shelling Syrian Kurdish positions, including the town of Azaz in Aleppo province. And, Saudi Foreign Minister Adel al-Jubeir said Russia “will fail to save” Syrian President Bashar al-Assad, whom Jubeir vowed to overthrow. In response to Saudi threats, Hezbollah said it would “slaughter Saudi troops” if they invade.

For his part, Assad has not ruled out that Turkey and Saudi Arabia will invade. He told the French Press Agency (AFP) on Monday: “Logically, intervention is not possible, but sometimes reality is at odds with logic, particularly when there are irrational people leading a certain state. That’s why I don’t rule that out for a simple reason: Erdoğan is a fanatical person with Muslim Brotherhood inclinations. He is living the Ottoman dream…

“He believes that he has an Islamist mission in our region. The same applies to Saudi Arabia. The collapse of the terrorists in Syria is a collapse of their policies. I tell you that this process is surely not going to be easy for them, and we will certainly confront it.”

The risks of a Saudi-Turkish invasion of Syria are enormous. If soldiers from NATO-member Turkish are killed by the Syrian army or Russian air force, will they seek NATO protection? If Saudi or its allied troops are killed how would the U.S. respond? An invasion could pit Saudi troops against Iranian forces on the same battlefield in what could be an historic Sunni-Shia battle.

Despite the tough Turkish and Saudi rhetoric, Saudi Arabia at least, has made it clear that it won’t invade without the U.S. leading the way. That puts the ball squarely in the Oval Office where President Obama has resisted committing U.S. combat troops to another war in the Middle East but reportedly wants to avoid further alienating U.S. “allies,” Turkey and Saudi Arabia.

At the State Department, John Kerry has made no statement about a possible invasion. Instead he’s using his close ties to Russian Foreign Minister Sergei Lavrov to try to nail down a partial ceasefire that is supposed start on Friday. The ceasefire would allow continue fighting against terrorists, but the U.S. and Russia disagree on exactly who should be included on the list of terrorists. Further, many of the U.S.-backed rebel groups collaborate with Al Qaeda’s Nusra Front in some areas, making targeting difficult even when there is U.S.-Russian agreement of who’s the terrorist.

Other mixed signals have come from the Pentagon where Defense Secretary Ashton Carter has “welcomed” the Saudi offer of ground troops. The matter was discussed at a NATO defense ministers meeting last week, but the only outcome was the acceptance of special forces from the United Arab Emirates.

Obama could simply cut U.S. losses in its disastrous Syrian “regime change” policy and accept a Russian and Iranian-backed Syrian government victory, but he would come intense criticism from Washington’s influential neoconservatives as well as Republicans. But does he have another choice if he wants to avoid war with Russia?

On Saturday, Obama called Russian President Vladimir Putin. It’s not known what they discussed about a possible invasion of Syria. However, if Obama threatened to intervene if Russia doesn’t end its military support for the Syrian military offensive, we could be in the middle of the most serious game of chicken since the Cuban missile crisis.

Nor do we know what Obama is telling the Turks and Saudis. On Monday, both countries toned down their bellicose rhetoric. Perhaps Obama delivered the only sane message possible: avoid a military confrontation with Russia at all costs. But it seems the lights will remain on at the Kremlin and the White House as the two nuclear powers look for some way to avoid a collision.