While some civil society activists have taken a brave and clear stance against the notorious, ISIS-affiliated Lal Masjid mullahs, where is the PML N government?

For that matter, why are the so-called “secular parties” like PPP, MQM and ANP taking such a meek stance. From their actions, it is clear that political opportunism is more important for these parties than taking a clear stance against the Lal Masjid cleric.

In his latest bile-induced hate mongering rants, ISIS-affiliate Maulana Aziz is attempting to divide the Pakistani State along sectarian lines. He has not even spared the ISI. 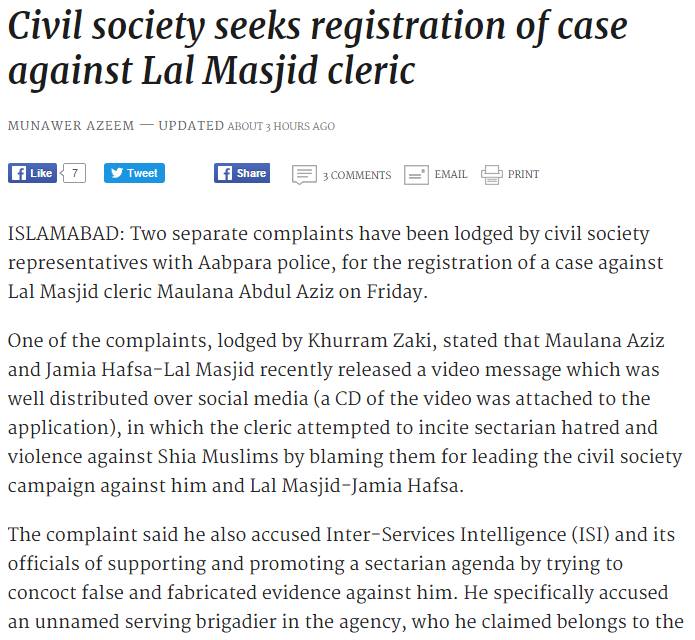 It is time that the PML N government stopped pandering to it pro Taliban lobbies and took a firm and clear stance against the menace of Takfiri Deobandi terrorism. While Pakistan’s students, children, minorities, army, civilians and intelligence agencies are ALL under attack by ISIS-affiliated Lal Masjid cleric Maulana Aziz, the PML N government seems more concerned in protecting such terrorists.

Similarly, those political parties that pride themselves on being secular are more concerned with political opportunism as opposed to taking the government to task on this crucial issue. None of them are concerned for the lives of the average citizen, police officer, children or soldier who are all facing the scourge of Takfiri terrorism inspired by Lal Masjid types.

The civil society activists who have taken a clear stance are not only being abandoned by their former celebrity activist colleagues, they have also been abandoned by the government whose primary responsibility is to protect them.