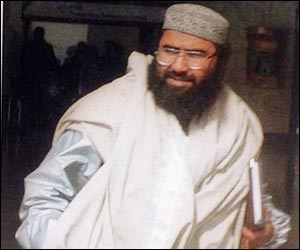 Important Quote: “On April 2nd, 2000 a Shia professional, Dr. Sibtain Dossa* was gunned down in the Southern port city of Karachi. Two of the absconding suspects in this murder were bodyguards of Jaish-e-Mohammad chief, Masood Azhar (The General and Jihad: Pakistan under Musharaf, Chapter 4, Wilson, John) ”

Jaish e Mohammad, a Takfiri Deobandi terrorist outfit allied and interconnected with ASWJ-LeJ (formerly known as Sipah Sahaba commits a terrorist attack on an Indian airforce base in Pathankot last week and faces global censure – as it should. Pakistan’s “liberals” write the odd column or two which are typically full of omissions such as the specific Deobandi identity of Jaish, its close connections with ASWJ-LeJ and its involvement in the local murders of Shia Muslims.

Actually, the last point is something that most of Pakistan’s “liberals” can never write a proper column on without providing backhanded justifications for ‪#‎ShiaGenocide‬. As per these “liberals”, Shias deserve their genocide because of some obscure landlord in rural areas or the exceptional statement by some cleric. For these “liberals” even a weak, wish-washy condemnation of #ShiaGenocide is conditional based , if it at all. For this lobby, all Shias = Iranian proxies barring some Uncle Tom Shia apologists who start berating and mocking the victims belonging to their own faith based community.

On April 2nd, 2000 a Shia professional, Dr. Sibtain Dossa* was gunned down in the Southern port city of Karachi. Two of the absconding suspects in this murder were bodyguards of Jaish-e-Mohammad chief, Masood Azhar (The General and Jihad: Pakistan under Musharaf, Chapter 4, Wilson, John)

The killers of the doctor were probably easy to identify. After killing the unarmed doctor in his medical clinic like some of the glorious heroes of the “Golden age”, the gang of killers were accosted outside by an individual who tried to capture them until they shot and wounded him too.

Following the execution of Saudi dissident scholar Sheikh Nimr, Pakistan’s “liberals” wrote the typical obfuscatory column by first misrepresenting the joint Sunni Sufi and Shia protests. They then chose selective metrics (like annual executions) to perpetuate the Iran = Saudi binary. They clearly left out crucial omissions such as the central role of Saudi Wahabism in global terrorism.

Similarly, in the case of Jaish, Pakistan’s (Fake) liberal mafia is omitting both the Deobandi ideology of Jaish as well as its role in #ShiaGenocide. Some of these “liberals” are just well disguised Jamaati bigots. Dig a little deeper and the frothing Jhangvi is not too far below the surface.

*Dr. Sibtain is one of over 160 Shia doctors/surgeons/medical professionals who have been killed in Pakistan by ISIS-affiliated Deobandi terrorists in the last couple of decades simply because of their faith identity.