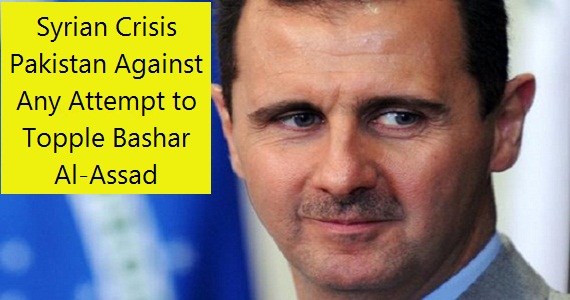 ISLAMABAD: After initial opposition from most political parties, parliamentarians and civil society, the government has been compelled to make a major announcement in which it assured Syria that it would under no circumstances topple the government of Syrian President Bashar al Assad.

Pakistan says that this is in line with Pakistan’s earlier stated position on various issues.After keeping a major policy decision under wraps for quite some time, Pakistan was compelled to confess that it had joined a Saudi-led 34-nation anti-terror alliance meant to combat terrorism, which would have its headquarters in Riyadh.

Saudi Arabia has consistently demanded the removal of President Bashar al Assad. However, even though Pakistan welcomed the formation of the coalition to counter terrorism, the spokesman says, “It is awaiting further details to decide the extent of its participation in different activities of the coalition.”

Pakistan has to tread carefully and not be seen taking sides as Iran, an immediate neighbour, is not a part of the 34-nation anti-terror alliance.Only after the Saudi government announced the alliance and showed the Pakistan flag along with others from the alliance that the Ministry of Foreign Affairs had to come clean on its secret major policy decision.

Unlike in the past when the Nawaz Sharif government took the issue of a Saudi request to put the Pakistani boots on the ground in Yemen to parliament, this time there was no such move with some reports even hinting that the prime minister and the army hief had not taken the Foreign Ministry into confidence.

In the past, Adviser to the Prime Minister on Foreign Affairs, Sartaj Aziz, was also the National Security Adviser. But now with this post given to a former army general, the office is now situated outside the Foreign Ministry i.e. in the Prime Minister’s Office.

“Pakistan has a principled position on the situation in Syria based on respect for territorial integrity and sovereignty of Syria. We believe that Syrian government and opposition groups should exercise restraint and settle their differences peacefully. Pakistan supports all efforts employed at facilitating a peaceful Syrian-led and inclusive solution that meets the aspirations of the Syrian people through a comprehensive political dialogue,” the spokesman at the Foreign Office said in a statement.

The spokesman further said that Pakistan had a principled position on the situation in Syria based on respect for territorial integrity and sovereignty of Syria.

Earlier, Senate Chairman Raza Rabbani had put Sartaj Aziz on the mat and asked: “So you have joined a military alliance about which you are still foggy”. Aziz responded that this was an alliance and not a coalition. “An alliance is more formal. We will come to parliament once details are available,” said Aziz.

According to the latest reports, Syria is ready to participate in peace talks in Geneva aimed at ending its brutal civil war, the country’s foreign minister said on Thursday during an official visit to China.

“Syria is ready to participate in the Syrian-Syrian dialogue in Geneva without any foreign interference,” Walid Muallem said during a press briefing following his meeting with the Chinese Foreign Minister Wang Yi.