Home  »  Original Articles   »   Why we reserve an especial hatred for the MQM? – by AZ 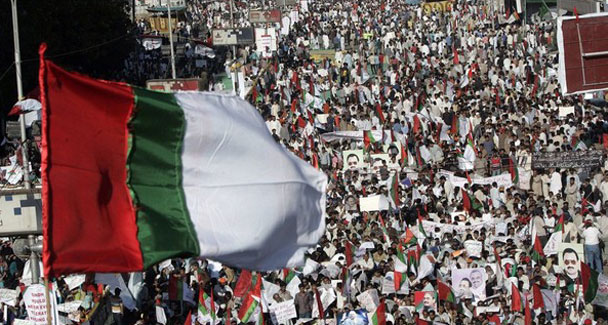 There is little wonder that in a country where secular nationalism has been colonized from within by Islamist hegemony, the MQM is widely hated. There has been more hate material against the MQM in the past few months than there has been against the Taliban in the past 20 years – lending deafening cadence to already popular prejudices, carving arguments, charges, and innuendos against the MQM and its constituency in stone.
Why?
One, because the MQM is the last bastion of secularism in a country being increasingly occupied by religious radicalization. Hence while contesting against the MQM, the ANP and the PPP have no qualms in allying themselves with the SSP whereas Imran Khan is already a known ideological sympathiser of the Talban and the JI.
Two, because by dint of the MQM’s middle class composition, the ruling elite of Pakistan –landowners, tribal leaders, top soldiers, and senior bureaucrats- hates the party’s guts. Pakistan’s establishment therefore holds an inherent bias against the MQM – regarding it among the distrusted quasi-outsiders if not as the enemy within.
Three, the party does not buy into the historical expressions of the Muslim and Arab and Central Asian conquerors’ power that form the overwhelming narrative in much of the rest of country. This aberration exacts a high price in what is at heart a very Islamist country.

While the MQM is a fascist, intolerant, and violent organization it has been widely abetted by the State of Pakistan when doing so suited the ruler of the day. That includes Nawaz Sharif, Pervez Musharaf, and Asif Zardari in succession. Much as the Pakistan Army uses the Jihadists and then chastises them when they get out of line.

The currently ongoing operation was initially a great success and could have been successful in terminally discrediting the MQM. However, for all the good it brought to Karachi, it has been rendered subjective by the company of too much generalized vitriol against the MQM’s support base and the employment of hackneyed and dubious methods a la accusations of a populace’s political representation, that the MQM embodies, being the enemy’s (RAW) agents. Instead of being seen as partners in nation they were accused of representing Indian interest, engendering the return of déjà vu revulsion in discerning minds. It’s a pity that an operation that delivered and promised much should go awry.

How do you expect a populace to vote that feels beaten and, more importantly, pushed to edges of the national life?

I see that as an opportunity lost just when the MQM had been reduced to the last shreds of credibility.

Opportunity lost? Yes, because I don’t think that the MQM –led by a megalomaniac whose sanity is subject to reasonable doubts- has any real desire to seriously mend its ways and now it will have much less pressure to do so too. A depressing prospect, indeed, that makes me fervently hope to be wrong.