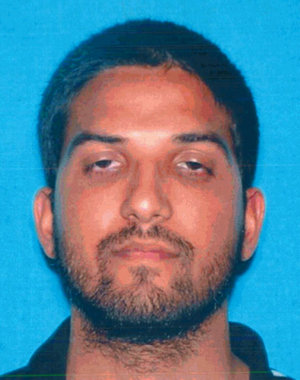 I would request muslims to stop appearing as apologists for the tragic killings in San Bernardino by Saudi-radicalized Wahhabi couple. We can no longer afford political correctness for some deluded notion about an Ummah. If you are a Shia, Ahmadi, Sufi, Sunni Barelvi, Druze, Alawite etc – you have already been rejected from this Ummah by powerful and growing Saudi-financied Salafi/Wahhabi and Deobandi groups.

On the one hand, Denialists are saying that these tragic killings have nothing to do with Islam. They actually do – specifically with Wahhabi ideology that is the state religion of Saudi Arabia, the closest US ally in the Middle East. Saudi Arabia continues to spend billions of dollars to spread Wahhabism and its South Asian variant, Deobandism across the globe. ISIS/FSA/Al Qaeda, Boko Haram, Al Shabaab, Taliban, ASWJ-LeJ are all Salafi/Wahhabi and Deobandi terrorist groups.

Rizwan Farook and Tashfeen Malik have a clear Saudi connection. It was not an impulsive act as it takes months to train and thousands of dollars to equip oneself with the tactical weapons gear that was used to perpetrate this heinous crime.

As 30 million Shias, Sunnis, Hindus, Christians and Sabeans were engaged in the largest peace march in Karbala, Iraq to commemorate the Arbaen of Imam Hussain, this radicalised Wahhabi couple with Saudi connections were plotting the murder of their innocent American co-workers.

Incidently, Wahhabis/Salafis and Deobandis echo the same hate against peaceful processions such as Arbaen in Karbala. In their warped understanding of faith, the Arbaen march is “Polytheistic” and an “innovation” while killing innocent Americans is their version of “Jihad”.

On the one hand there are Denialists and on the other hand, there are a handful of celebrity NGO funded activists. Both share the same function of obfuscating the central role of Saudi Arabia and Wahhabism in the San Bernardino tragedy. The Denialists like Saudi-funded CAIR/ICNA/ISNA keeping peddling the same line that such events have nothing to do with Islami. No mention of Wahhabism.

The celebrity activists keep using sweeping and vague terms like “Islamists” that dishonestly conflates both the victims of Wahhabi terrorism such as the Ahmadis, Shias and Non-Salafi Sunnis in the same category as the perps.

These dishonest celebrity activists will never be specific about the Salafi and Deobandi identity of the Taliban, ASWJ-LeJ, ISIS/FSA/Al Qaeda, Boko Haram and Al Shabab. None of these celebrity activists has penned anything of significance on the 30 million Arbaen march in Karbala even as they will focus on the most mundane aspects of muslims while ignoring such a significant event.

These celebrity activists can easily be spotted from their regurgitation of Al Jazeera and CNN spin in support of the “moderate rebels” of the Salafi Ikhwan/FSA/Al Qaeda. They can be spotted in dismissing the Pro-democracy protests in Bahrain as a “Safavid/Iran conspiracy”.

Both the Denialists and the celebrity activists share a common goal of protecting Wahhabi/Saudi interests as well as a common bigotry against the main victims – i.e. Shias and non Salafi Sunnis – of ISIS.