Tony and Cherie Blair with Syrian dictator Bashar al-Assad, and his wife Asma, outside Downing Street in 2002. His regime has been accused of killing tens of thousands of civilians.

Tony Blair (again) with then Libyan dictator Muammar Gaddafi, in 2007

The US special envoy to the Middle East, Donald Rumsfeld, and Iraqi dictator Saddam Hussein, in December 1983 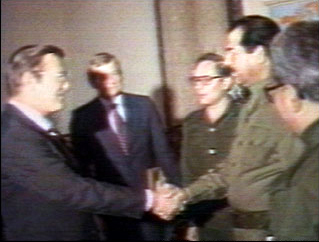 Hillary Clinton, then US secretary state, and Mutassim Gaddafi (Gaddafi’s fourth son), in 2009.

Barack Obama and King Abdullah, in 2009. Saudi Arabia’s rulers have been accused of not stopping actors from within the country from funding extremists groups.

Then French president Nicholas Sarkozy and Gaddafi, in 2009. Two years later Gaddafi would be dead, killed by Libyan rebels after a US-UK-British bombing campaign.