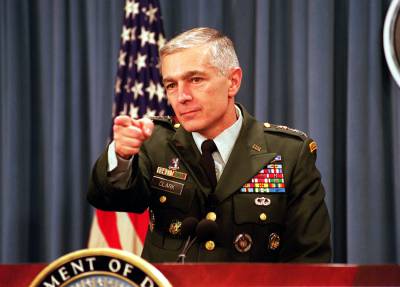 Former Supreme NATO Commander Gen. Wesley Clark is quite a character. Immediately after the Kosovo War, Clark actually ordered NATO troops to attack Russian peacekeeping troops (the order was ignored). But sometimes he does or says things which aren’t completely mental. This is one of those times. During a recent interview, Clark let out the following:

All along there’s always been the idea that Turkey was supporting ISIS in some way… Someone’s buying that oil that ISIS is selling, it’s going through somewhere, it looks to me like it’s probably going through Turkey, but the Turks haven’t acknowledged that.

Coming from a former NATO commander, this is quite a statement. It’s almost as scandalous as the time that Clark said that the Pentagon revealed a plan to invade Iraq, Syria, Lebanon, Lybia, Somalia, Sudan, And Iran immediately after 9/11. This is one of our favorite videos: