Those who continue to justify these Wahabi Al Qaeda FSA ISIS sickos and misrepresent them as “moderate rebels” who were “oppressed” and “radicalised” by the Syrian government: Shame on you!!

What did the innocent Parisien ever do to deserve such faith by these twisted Wahabi terrorists? Stop blaming the victims and start exposing the real culprits who enabled these Wahabi extremists.

Just as we used to condemn Pakistani generals and politicians for getting bed with the Taliban, we must also condemn President Hollande and Senator McCain and PM Cameron for supporting and arming these terrorists to topple secular regimes. And for debasing themselves in front of various Gulf despots.

The Taliban and its radical Deobandi affiliates like ASWJ-LeJ murdered 70,000 Pakistani civilians and soldiers because some generals and politicians wanted “strategic Depth” in Afghanistan.

Just as we slammed and exposed Pro Taliban journalists like the slimy Hamid Mirs,
Ansar Abbasis, Javed Chaudharys. Ejaz Haiders, Orya Maqbool Jan for peddling the establishment line, we must also slam the douchebags like Michael Weiss, Ali Khedery, Tom Friedman and the hacks at CNN and BBC who sold this bs about “moderate rebels”

We cannot have one standard for the Taliban apologists like Imran Khan and Nawaz Sharif and another for Al Qaeda apologists like Senator McCain, President Hollande, Erdogan.

Those who are selective in this issue should be called out for their hypocrisy. From Paris to Beruit to Zabul to Baghdad, we cannot afford this selective and dishonest outrage anymore! 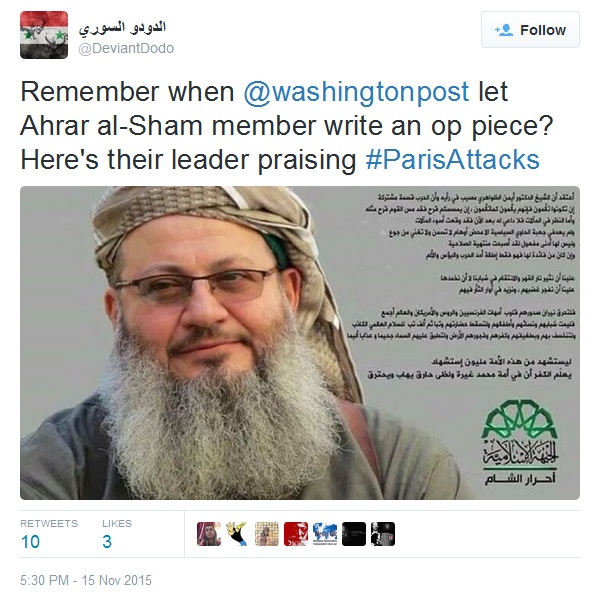 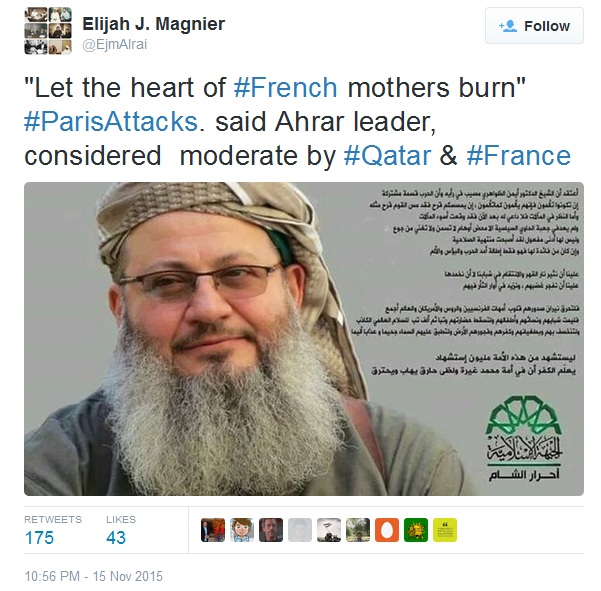 As has become obvious, the Obama administration’s response to the Syrian conflict is an abject failure. No clear strategy has been determined; the administration’s “red lines” have not been honored. Short-term, stopgap measures informed by the Iraq and Afghanistan experiences, along with the noise generated by a media fixated on the Islamic State, have taken priority over achievable, long-term goals. The result: a death toll commonly estimated at between 200,000 and 300,000 people (though it’s certainly higher), more than 11 million displaced and numerous cities in ruins.

Nowhere is this failure clearer than in the consequence of the misguided way that Syrian revolutionaries are labeled as either “moderate” or “extremist.”

In December, Secretary of State John F. Kerry stated that “Syrians should not have to choose between a tyrant and the terrorists.” There was, Kerry declared, a third option: “the moderate Syrian opposition who are fighting both extremists and [Syrian President Bashar al-]Assad every day.” Unfortunately, this commendable view has broken down because the United States has defined the term “moderate” in such a narrow and arbitrary fashion that it excludes the bulk of the mainstream opposition.

The group to which I belong, Ahrar al-Sham, is one example. Our name means “Free Men of Syria.” We consider ourselves a mainstream Sunni Islamic group that is led by Syrians and fights for Syrians. We are fighting for justice for the Syrian people. Yet we have been falsely accused of having organizational links to al-Qaeda and of espousing al-Qaeda’s ideology.

Nothing could be further from the truth. We believe that Syria needs a national unifying project that cannot be controlled or delivered by a single party or group and should not be bound to a single ideology. We believe in striking a balance that respects the legitimate aspirations of the majority as well as protects minority communities and enables them to play a real and positive role in Syria’s future. We believe in a moderate future for Syria that preserves the state and institutes reforms that benefit all Syrians.

Late last year, dozens of our top leaders were assassinated in a bomb attack. We recovered from this setback, and a new leadership quickly emerged, confirming the high level of institutionalism and professionalism within our ranks, as well as the deep support we enjoy within the local population. Syrians consider us an integral, valued element of the revolutionary landscape, yet we have been unfairly vilified by the Obama administration from Day One.

Stuck inside their own bubble, White House policymakers have allocated millions of U.S. taxpayer dollars to support failed CIA efforts to support so-called “moderate” forces in Syria. But these “moderate” groups have proved to be a disappointment on nearly every count, not least of all in confronting the Islamic State. Further, the self-defeating policy of regarding the war against the Islamic State as being fundamentally different from, and in some cases diametrically opposed to, efforts to remove Assad from power has brought no end to either battle.

By Washington’s own admission, the systematic death and destruction — often through chemical weapons — wreaked upon Sunni towns and villages by Assad’s Alawite-dominated army remains a huge recruiting agent for the Islamic State, just as former Iraqi prime minister Nouri al-Maliki’s sectarian policies drove ordinary Sunnis into the arms of these extremists. But while the United States applied pressure to remove Maliki from power, some in Washington (and at the United Nations) still hold on to the ridiculous notion that Assad could be part of the solution for Syria.

In fact, recent victories by our comrades confirm that the Syrian regime is weak and dying. It has lost all capacity for strategic initiative and is suffering from crippling manpower shortages. Assad is now increasingly reliant on Iranian-funded Shiite volunteers, but even these foreign fighters — drawn from as far away as Afghanistan — cannot turn the tide.

The moral case against Assad should have been enough to discount him as an option, but now the facts of war have made it clear that he is finished. The only remaining question is who will deliver the coup de grace: the Islamic State or the Syrian opposition. That question should prompt Washington to admit that the Islamic State’s extremist ideology can be defeated only through a homegrown Sunni alternative — with the term “moderate” defined not by CIA handlers but by Syrians themselves.

Despite a disappointing lack of genuine engagement from the international community, we remain committed to dialogue. The issues that need to be discussed are how to end Assad’s reign, how to defeat the Islamic State and how to ensure that a stable and representative government in Damascus puts Syria on the path to peace, reconciliation and economic recovery while avoiding the disintegration of the state. It is not too late for the United States to change course. Kerry’s “third option” exists — but only if Washington is willing to open its eyes and see it.