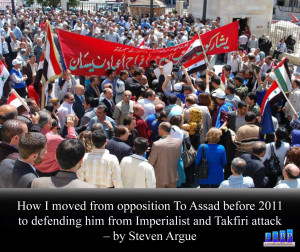 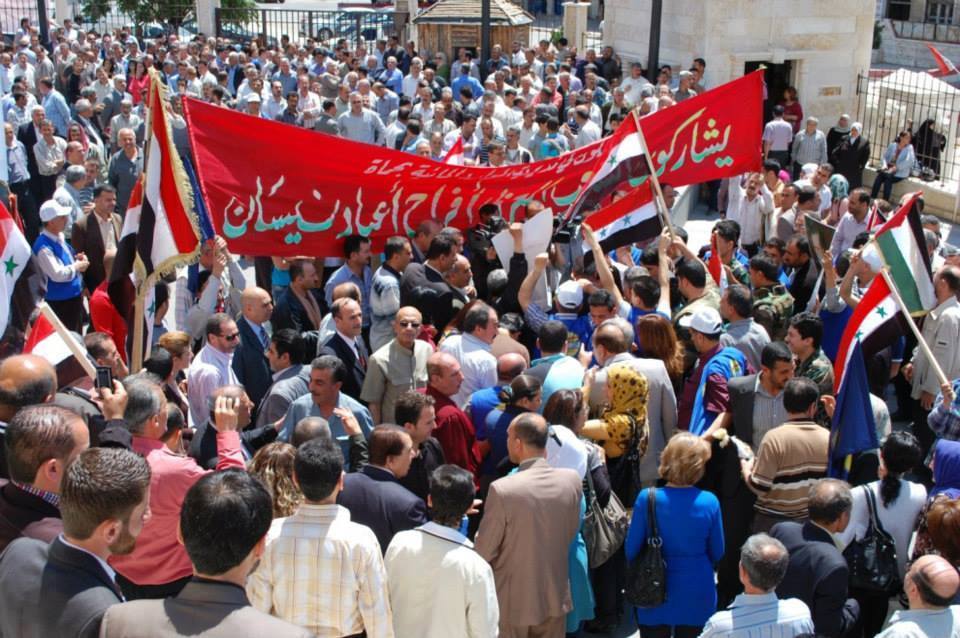 1. Oppression of the Kurds;
2. Human rights abuses;
3. Neo-liberal economic reforms that turned back some of the gains of the 1963 Syrian Revolution;
4. Cooperation with Bush’s so-called “war on terror”;
5. And, despite some socialist measures like the nationalization of oil, the lack of a fully socialist system in Syria.

Yet, I was cautious when protests erupted against Assad. I needed to know who was leading these protests and what their political program was. This soon became clear to me because I looked for sources beyond the western imperialist propaganda.

The supposed pro-democracy protests in 2011 were led largely by the Muslim Brotherhood and a common chant was, “Christians to Beirut, Alawites to their graves!” I knew there were problems from the beginning and, despite the insistence of some people I knew, I refused to side with the protests against Assad. By 2012 the protests had morphed into the U.S. backed and Muslim Brotherhood led Free Syrian Army and some similar sectarian Sunni Islamist groups. I was not enthusiastic about siding with Assad, but found I needed to for the following reasons:

1. The rebels were being backed by the U.S. and EU imperialists as well as their allied puppets of Saudi Arabia, Turkey, Qatar, Jordan, and Israel. I think it is a duty of all anti-imperialists to side with any government and people under U.S. imperialist attack, largely because U.S. imperialism always imposes something worse on the less developed world. Always.

2. The western backed rebels had begun acts of mass murder, kidnapping, and other crimes against Christians, Alawites, and Shi’ites as well as acts of war against the Kurds.

3. Assad pulled his troops out of Syrian controlled Kurdish territory which liberated Kurdish territory and paved the road to the current alliance between the Kurdish forces of the YPG and the Syrian Arab Army (SAA) against the western backed Islamists.

4. The YPG and SAA were highly secular and pro-woman in their outlook. The western backed Islamists were beginning to impose highly religious and anti-woman governments where they seized power.

My analysis at that time has been proven to be correct. As the less radical Islamist FSA evolved fighting side by side with the more radical ISIS, Jabhat al-Nusra, and Islamic Front, huge numbers of weapons and western trained fighters in the FSA dissolved into these other groups. The FSA is no longer a real force in Syria and there was never really anything very moderate about the FSA jihadists in the first place.

Attempts by the western imperialists to say the Russian bombs that are destroying ISIS now are somehow destroying moderate rebels instead of ISIS ignore the fact that even the U.S. government in the last few months have come to admit that there are no “moderate rebels” in Syria. Suddenly these imaginary moderate rebels are resurrected as an excuse for the U.S, government to oppose Russia’s successful campaign against ISIS.

While I advocate a full socialist program, I also say a road to the victory of socialism is the defeat of the imperialists and all of their Frankenstein monsters in Syria, Kurdistan, Turkey, and Iraq. This is part of the program for building revolutionary socialist parties in the Near east. Without apology

Long live the internationalist support they are receiving from Russia, Iran,
Hezbollah, and the PKK!

Here are some relevant articles I have written:

Afghanistan: Misogynistic Hell Hole Made in the U.S.A.
by Steven Argue

The Vogue of Russophobia In Imperialist Propaganda
An Anti-Chauvinist Communist Response
by Steven Argue
https://www.facebook.com/RevolutionaryTendency/posts/1040460675966629:0

In Support of Russian Intervention in Syria
by Steven Argue
https://www.facebook.com/RevolutionaryTendency/posts/1037449069601123:0

The following was written just before the U.S. backed Islamists in Syria became a threat to the U.S. imposed death squad government of Iraq and the U.S. then kinda sort of switched sides, backing some anti-woman Islamists and carrying out a questionable partial war on others in ISIS while still backing Turkey who are still murdering some of the best Kurdish fighters against ISIS.

For an in-depth analysis of the Kurdish struggle, check out my following article that was published in the Kurdish press:

For a Socialist Republic of United Kurdistan as Part of a Socialist Federation of the Near East!
by Steven Argue
http://ekurd.net/mismas/articles/misc2013/3/syriakurd753.htm