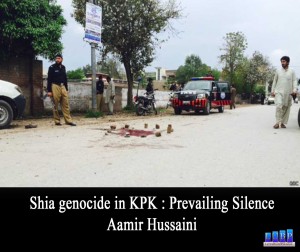 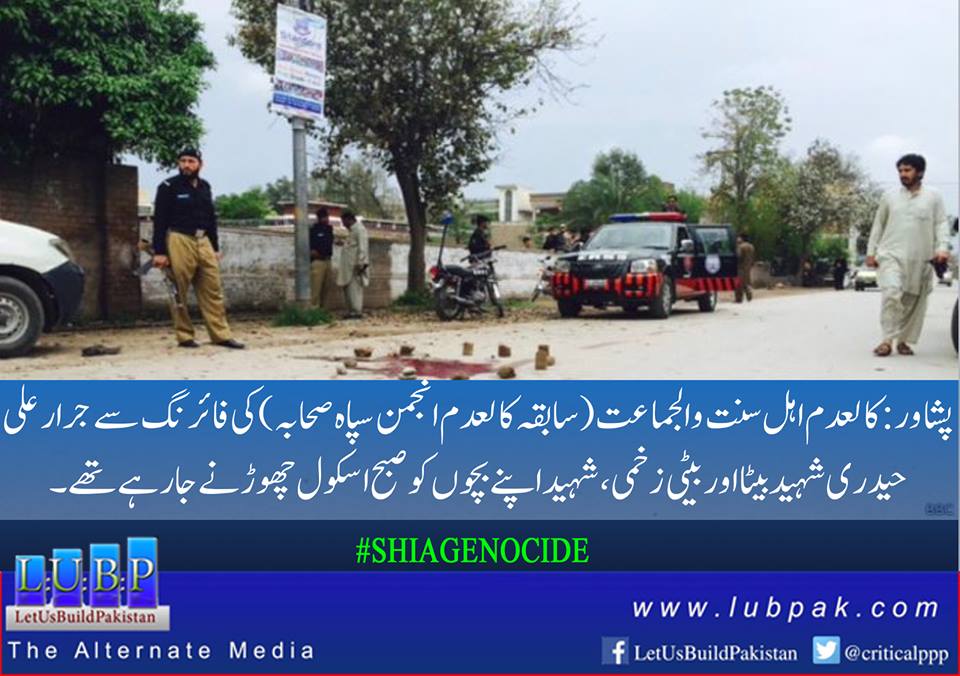 Yesterday at Muhammad Ali Juhar road in Peshawar capital of KPK province some terrorists of Takfiri Deobandi organization Ahlesunnat Waljamat – ASWJ another cover name of SSP intercepted a motorbike rider going to drop his daughters at their school and opened fire and one bullet hit him and he killed at spot and his daughters got injuries.

The person who was targeted at Muhammad Ali Juhar road in Peshawar was later identified as Malik Jarar Haider belonged to Shia community. According to a leader of Shia community Akhwanadza Guzanafar Ali interceptors of motorbike of Shia deceased person Malik Jarar Haider chanted hate slogans against Shia community like Kafir Kafir – Shia Kafir ‘ Death to Every Shia, and they escaped.
This was not single incident in two month in which Shia was targeted but before three weeks in mid September a Qulfi seller Qaiser Rasa belonged to Shia community was killed at same road Muhammad Ali Juhar road. A bank manager Safdar Abbas was killed in this area and leader of Shia organization Ali Asghar, President of Tanzeem -Momineen Parachanar Gulab Hussain Turi were also targeted and killed by Deobandi Takfiri terrorists of ASWJ in area of Muhammad Ali Juhar road Peshawar.

Area from Qisaa Khawani Bazar to Muhammad Ali Juhar road has become slaughter house for Shia community and Shia already tiny minority in KPK are being forced to migrate from KPK and they are in environment of fear constantly.
According to elders and leaders of Shia community in Peshawar they made request several times to District and provincial concerned authorities to declare this area most sensitive and deploy heavy contingents of security forces and supervise this area through CCTV cameras but nobody paid attention on our requests.
PTI and JI are allies in KPK government and leadership of both parties make much noise on issue of target killing in Karachi where both parties target only MQM but shut their mouth tightly on involvement of terrorists of ASWJ or other Deobandi Takfiri organizations in Shia and Sufi Sunni genocide in Karachi. But complete silence is prevailed in circles of both parties on issue of target killing of Shia community in Peshawar particularly and KPK in general. Opposition in KPK assembly played not its role to raise issue of target killing of Shia community.

Tragic point in on – going target killing of Shia community is that already a tiny minority sect of Muslim community is being forced either they would change their sect. Or they migrate not only from their native city but whole province. Shia minority is in full danger in KPK and before Shia community Sufi Sunnis have faced radical fascists invasion on their religious rituals, mosques and shrines and TTP and others want to see KPK pure earth after cleansing of Shia and Sufi Sunnis.

Imran Khan and other leaders of PTI often condemned C. M Punjab Mian Shahbbaz Shrif due to his links with Deobandi Takfiri terrorist organization ASWJ and its leadership but they are keeping their mouth shut tightly free roaming of terrorists of ASWJ and its function all over the province despite ASWJ is banned organization according to list of proscribed organizations submitted by NACTA and Interior ministry.

Is blood of Shia community in KPK is so cheap that on their target killing only silence prevails in corridors of power in province and federal government? Opposition in Senate, National assembly and provincial assembly also did not utter a single word on said issue.
Human rights organizations should take up this issue at once because religious terrorism and sectarian fascist forces are targeting tiny minority Shia sect and they are involved in organized cleansing of Shia, Sufi Sunnis, Christians and other communities in KPK. Shrines, Churches , Imambargahs, processions of Muharrum and Milad are their great target in KPK.
During Muharrum and after that this is ASWJ which creats panic and want to see total ban on Processions and Majalis of Shia community. Recently Home department of Punjab sent a letter to all District Police offices in which it has been directed not to allow any majlis even in walled boundary without use of loudspeakers or in houses which are not already registered by security branch.

It means that now you can not mourn Hussain and other Martyred at Karbala in your houses without registration of mourning event in security branch. This is total violation of basic human rights of Shia community but on other side ASWJ is free to disseminate hate speeches and hatemongering materials against Shia community and other sect despite a ineffective ban on this organization.