Home  »  Newspaper Articles   »   What Putin told the UN: the US and allies are to blame in Mideast 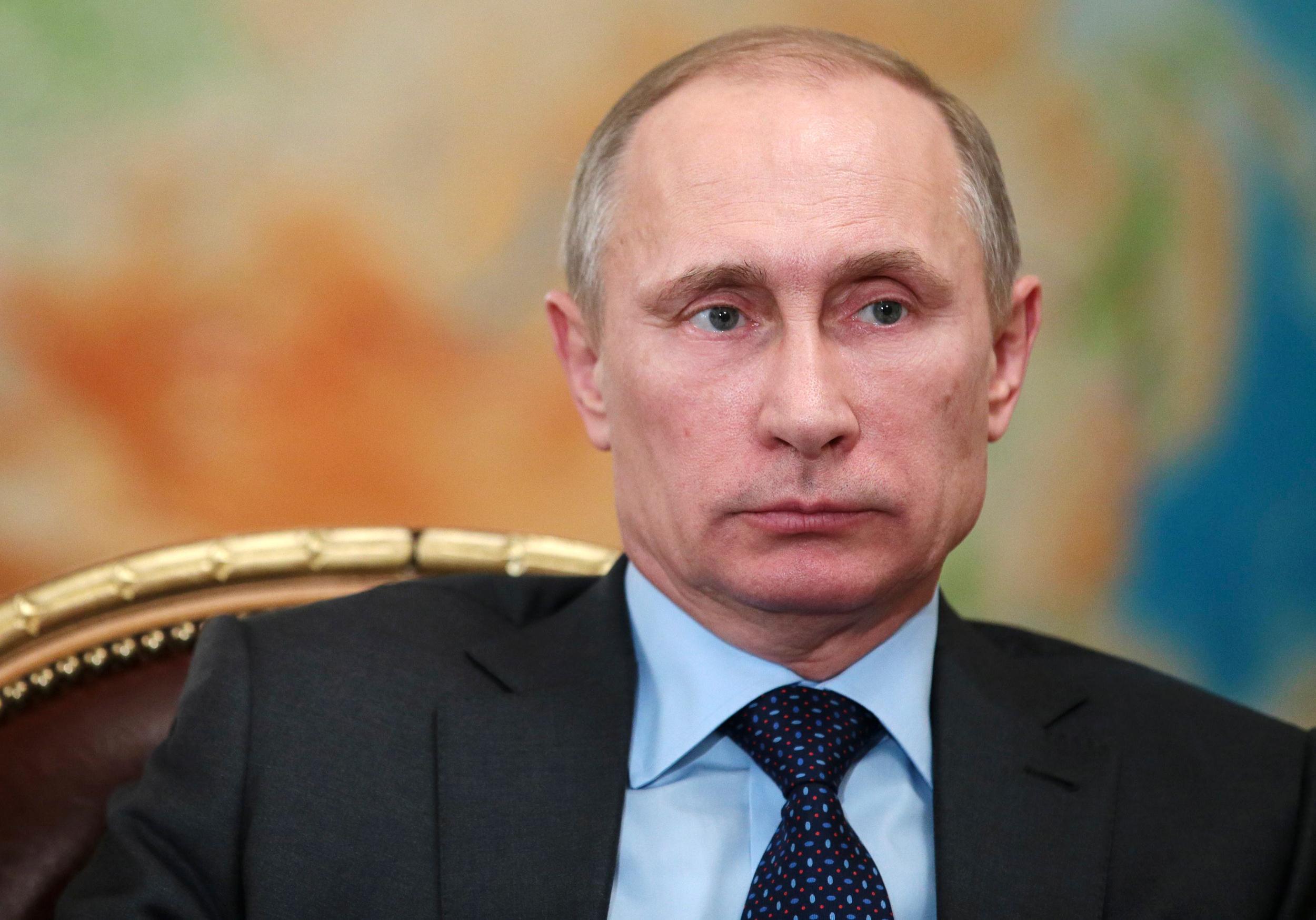 Those who hoped Vladimir Putin would lead the way out of the Syria crisis with a detailed new plan on Monday were disappointed. The Russian president used his address to the UN General Assembly for a tour de force of all the usual grievances about US exceptionalism, colour revolutions and Nato expansion that have been the stock of his speeches for at least seven years.

The key passages of his speech show there is very little room for co-operation between Russia and the US to join hands in resolving the bloody civil war in Syria.

“We all know that after the end of the Cold War, a single centre of domination emerged in the world. And then those who found themselves at the top of that pyramid were tempted to think that, if we are so strong and exceptional, then we know better than anyone what to do, and why at all should we reckon with the UN, which instead of automatically authorising and legitimising necessary decisions often creates obstacles or, in other words, ‘stands in the way’,” he said.

Just a minute into his address, Mr Putin laid out his conviction that for the past 25 years since the collapse of the Soviet Union, the US has abused its status as sole superpower and thus undermined the system of global governance. The effect of this assertion was reinforced by the fact that US President Barack Obama in his address asserted that Washington would continue to use its military to intervene around the world wherever it deemed necessary.

“Instead of the triumph of democracy and progress, we got violence, poverty and a social disaster … I cannot help asking those who have caused this situation: do you realise now what you have done?”

Here Mr Putin puts the blame for civil war and state failure not just in Syria but across the Middle East and North Africa on the US and its allies.

Elsewhere in his speech, he argued that state sovereignty was the real path to democracy as it gave nations the means to decide their destiny themselves. His argument starkly contrasted with that made by Mr Obama, that it was wrong to hold back with intervention against a brutal regime because the alternative could be worse.

“It is now obvious that the power vacuum created in some countries of the Middle East and North Africa led to emergence of anarchy areas. Those immediately started to be filled with extremists and terrorists. [The ranks] of the so-called ‘Islamic State’ […] include former Iraqi servicemen who were thrown out into the street after the invasion of Iraq in 2003. Many recruits also come from Libya, a country whose statehood was destroyed as a result of a gross violation of the UN Security Council Resolution 1973.”

According to Mr Putin, the US-led campaigns in Iraq and in Libya were the root cause for the formation of the Islamic State of Iraq and the Levant, the group also known as Isis, as a threat now plaguing the entire Middle East and threatening countries far beyond.

“And now the ranks of radicals are being joined by the members of the so-called ‘moderate’ Syrian opposition supported by the Western countries […] First they are armed and trained, and then they defect to the Islamic State. […]

“It would be equally irresponsible to try to manipulate extremist groups and place them at one’s service in order to achieve one’s own political goals in the hope of ‘dealing with them’, or, in other words, liquidating them later.

“To those who do so I would like to say: dear sirs, no doubt, you are dealing with rough and cruel people, but they are in no way primitive. They are just as clever as you are and you never know who is manipulating whom. The recent data on arms transfer to this most ‘moderate’ opposition is the best proof of it. ”

Mr Putin defened the Russian military build-up in Syria, which many see as a bid to secure Moscow’s influence in the region if Syria is partitioned

The Russian president argues that it is impossible to draw a line between Syrian opposition groups and the terrorist groupings both he and Mr Obama vow to fight. This then becomes the basis for his insistence that only co-operation with Syrian president Bashar al-Assad is legitimate in this fight against terrorism.

“Today, we provide military and technical assistance both to Iraq and Syria that are fighting terrorist groups. We think it is an enormous mistake to refuse to co-operate with the Syrian government and its armed forces, who are valiantly fighting terrorism face-to-face. We should finally acknowledge that no-one but President Assad’s armed forces and Kurd militia are truly fighting the Islamic State and other terrorist organisations in Syria.”

Mr Putin here confirms in passing that Russia, besides propping up the Assad regime, is also involving itself in Iraq — a fact revealed at the weekend first by Russian media and then by the Iraqi armed forces. Mr Putin leaves little or no room for co-operation with most of the US-led anti-Isis alliance as he equates almost all forces fighting on the ground in Syria together with terrorists.

“Dear colleagues, I must note that such an honest and direct approach of Russia has been recently used as a pretext to accuse it of growing ambitions (as if those who say it have no ambitions at all). However, it is not the matter of Russia’s ambitions but the recognition of the fact that we can no longer tolerate the current state of affairs in the world.”

Mr Putin defends the Russian military build-up in Syria over the past month, which many have interpreted as a bid to secure Moscow’s say in the country’s future and influence in the region in case Syria is partitioned. This statement sums up the exasperation the Russian government has expressed for years at what it sees as a US quest for global influence.

“In essence, we suggest that we should be guided by common values and common interests rather than ambitions. We must join efforts to address the problems that all of us are facing on the basis of international law, and create a genuinely broad international coalition against terrorism. Similar to the anti-Hitler coalition, it could unite a broad range of forces that are willing to resolutely resist those who just like the Nazis sow evil and hatred of humankind.”

Isis attack Kobane in Syria. Mr Putin says the US-led campaigns in Iraq and Libya were the root cause of the group’s formation

By invoking the defeat of Nazi Germany, Mr Putin elevates the fight against terrorism to a matter more important than anything else. For Russia, victory over Hitler has become the core of state identity, and Mr Putin refers to the alliance that won the second world war as one that succeeded because it co-operated across ideological lines.

“Naturally, the Muslim countries are to play a key role in the coalition, even more so because the Islamic State does not only pose a direct threat to them but also desecrates one of the greatest world religions by its bloody crimes. The ideologists of militants make a mockery of Islam and pervert its true humanistic values. I would like to address Muslim spiritual leaders — your authority and your guidance are of great importance right now.”

Reaching out to Muslim countries and Muslim religious leaders is extremely important for Russia for two reasons: first, it points to Iran as a key regional power which should not be left out of any external effort to solve the Syrian crisis. Second, Russia, with its own sizable Muslim population, feels vulnerable to Islamist terrorism. This appeal is part of a broader charm offensive with which Mr Putin is targeting Muslims at home and abroad.

“Naturally, any assistance to sovereign states can and must be offered rather than imposed, but exclusively and solely in accordance with the UN charter. In other words, everything in this field that is being done or will be done pursuant to the norms of international law must be supported by our universal organisation. Everything that contravenes the UN charter must be rejected,” he says.