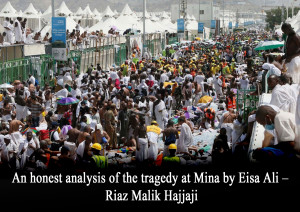 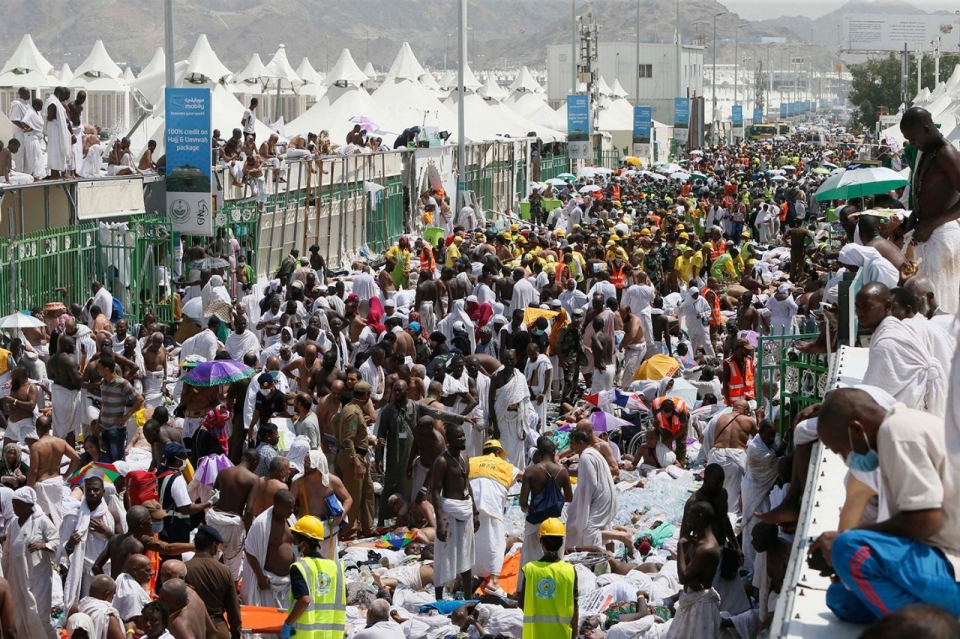 This note by Eisa Ali and the following post by him present a coherent and honest analysis of the tragedy at Hajj today – a tragedy that was a direct result of the grotesque mismanagement of the Saudi authorities.

Also pointed out within the conversation, the Saudis should concentrate more on providing basic arrangements to pilgrims – they charge thousands of dollars and earn billions from the annual Hajj.

However, the Saudis are too busy promoting Extremism and buying the servility of their allies, “human rights” groups and the media (take a bow Ali Khedery).

and Bombing Yemeni children is a greater priority for this Saudi King than providing adequate facilities for pilgrims.

“As much as I criticise the Saudi government I believe we have to always be fair in any criticism. But these accounts are insane. Once you finish stoning at Mina, you kind of just leave via the sides of the place where the pillars are (I can only describe it by saying it kind of looks like a big indoor car park now), there are roads on both sides that take you back to the tents. If they closed even one, let alone two of these roads then that is beyond criminal, it’s almost deliberately causing a catastrophe because you’re making the pilgrims go back the way they came in the face of an endless stream of people.

It’s a crude and inaccurate example, but think of it like this, imagine you have
100,000 people going into a football stadium and another 100,000 coming out at the same time, and now they are sandwiched into the narrow concourse of the stadium and also consider there are very few match stewards giving orders, and those that are there are doing so in a language the fans don’t understand. It’s gonna be chaos.

If they really did close those roads to allow for Royals to pass through then it’s inexplicable. And regarding policing and languages, if they can find Farsi-speaking Afghan “religious police” to harrass the Shi’a Iranian pilgrims then they can find stewards who speak the myriad of languages to help pilgrims…
Saudi Hajj stampede: Accounts from BBC staff

It was at Mina in 2012 where my cousin and I were nearly killed in a crush during Hajj. We were being tipped over by the rush of the crowd and would’ve been trampled if we had gone down and about a dozen of us managed to push back and level out again. A combination of ignorant, inconsiderate behaviour by some pilgrims and poor management of the entire pilgrimage by Saudi authorities are to blame for situations like this happening. But ultimately the responsibility comes down to the latter.

Reports from groups in Mecca say the authorities shut paths for “dignitaries” and royals to pass with ease, making a crush inevitable. There are also very few people directing crowds during the stoning at Mina so they all rush to the first stone at an angle which causes a wedge and everyone within the wedge is trapped. If you get crushed, there’s no where to go. When we were there paths were shut and that contributed to the near-stampede although I can’t say whether they were shut for the “dignitaries”.

2-3 million people go on hajj every year, in a country with money and infrastructure. Faeces and rotting trash are left in the streets for days (and that’s in residential areas). Crushes and near misses happen way too often.

In Karbala, Iraq, 15-18 million people do the Arbaeen pilgrimage and there are hardly any incidents, save for ISIS terror attacks targeting the pilgrims merely because they are Shia. Karbala has far less in terms of infrastructure and resources than Saudi Arabia does and Iraqis are notoriously disorganised (although Karbalais less so and they manage the pilgrimages well) and yet there aren’t any crushes and the like (and InshAllah there won’t ever be).

I don’t really know what the reason is for this crush but better organisation and management would go a long way in ensuring things like this tragedy don’t happen again.