Home  »  Original Articles   »   Why only LUBP, not other “liberal” bloggers, are being attacked by Tahir Ashrafi and Ludhyanvi? – by Ali Abbas Taj 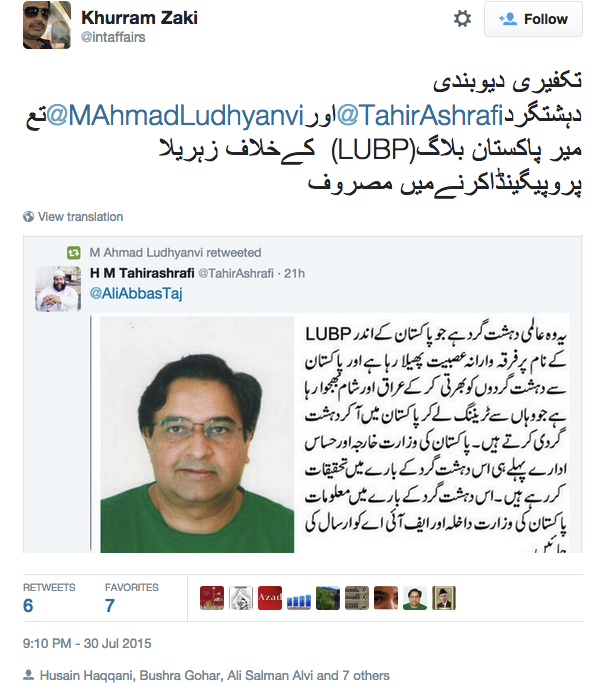 Since 2008, the LUBP blog, Pakistan’s top blog in terms of visitor traffic and original content, has been highlighting the issues of human rights and minority rights, and as an alternative media, has also exposed the culture of silence, double-standards and obfuscation on these issues in Pakistan’s mainstream media.

LUBP is a pioneer of the discourse on Shia genocide, Sunni Sufi genocide, persecution and massacres of Ahmadis, Christians and other communities and the dominant role of Takfiri Deobandi terrorists in Pakistan and beyond.

Because of its principled position, LUBP has been often criticized by banned terror outfits, Deobandi hate clerics and their commercial or pseudo-liberal comrades.

Some wannabes or naive comrades have gone to the extent of advising LUBP to tone down its principled position as alternative media.

For those who want to give unsolicited moral sermons to our team at Let Us Build Pakistan (LUBP) blog, I ask them this:

Where is your outrage, your talk about “respect” “grace” and “dignity” when some of us are constantly under attack, threats and blackmail by Malik Ishaq’s closest ally and facilitator, the anti-Ahmadi, anti-Shia, anti-Sunni, anti-Christian hate cleric, Tahir Ashrafi Deobandi.

For the past few years, LUBP has been facing a systematic campaign of harassment, threats and witch-hunting by Tahir Ashrafi, Ludhyanvi and other closet and open supporters and sympathizers of Takfiri Deobandi terrorists including some elitist or Ashrafi-brand liberals.

Only yesterday (30 Jul 2015), Deobandi hate clerics Tahir Ashrafi and Ahmed Ludhyanvi (head of banned terror outfit ASWJ) were seen tweeting against LUBP and me in my capacity as an editor of this blog.

Since the death of his comrade Malik Ishaq, Tahir Ashrafi and ASWJ’s major attacks have been against LUBP and I have highlighted one major example here. It was the ASWJ-LeJ chief, Ahmed Ludhyanvi who retweeted Tahir Ashrafi’s threats and blackmail against LUBP. And not a peep or condemnation out of “heroes” like Jibran Nasir, Saleem Safi, Beena Sarwar, Najam Sethi, Hamid Mir and other members of the Ashrafi-elitist lobby.

Tahir Ashrafi is least bothered about “liberal” “heroes” like Jibran Nasir, Beena Sarwar, Sherry Rehman, Saleem Safi, Najam Sethi and other bloggers of Pak Tea House and Friday Times blog. In fact, many of them like Sherry Rahman and her Jinnah Institute promote Tahir Ashrafi as a progressive and tolerant cleric!

It is our team at LUBP and other committed Sunni, Sufi, Shia and Ahmadi activists who are under attack from this hate cleric, Tahir Ashrafi. The same Tahir Ashrafi who incited the death of Pakistan’s Christian Federal Minister Shahbaz Bhatti!

Where is that Uncle Tom Shia sellout/backstabber from the DARKNESS blog? See how the Darkness blog is silent on the promotion of Tahir Ashrafi as a progressive cleric by the likes of Beena Sarwar, Raza Rumi, Najam Sethi and Sherry Rehman. See how he and his Ashrafi liberal comrades have completely wiped out the key role played by Tahir Ashrafi in negotiating the release of Malik Ishaq in 2009-10. This release cost a few thousand more Shia lives while your heroes like Jibran Nasir, Beena Sarwar etc get to lecture us about “extra judicial” measures. See how these so called liberals are completely silent on the blatant anti-Shia anti-Ahmadi anti-Sunni Barelvi hate speech by Tahir Ashrafi on his Twitter account.

Instead of being honest and open about the supporters of Malik Ishaq/ASWJ-LeJ, these commercial liberal sellouts want us to accept more intensifying ‪#‎ShiaGenocide‬ while the PMLN-ASWJ loyalist judges free more Malik Ishaqs from jail.

And while these “heroes” (eg Beena Sarwar, Saleem Safi, Jibran Nasir, Mujib Shami)  campaign against the death penalty for criminals like Malik Ishaq, what about the threats that their ‘progressive’ friend Tahir Ashrafi is issuing to those Shia, Sunni and Ahmadi activists who expose this hate speech and facilitation of genocide.

If you expect us to lick the boots of Tahir Ashrafi’s friends and promoters from the Beena-Sethi-Sherry lobby and engage in the same wishy washy, hypocritical debate, you have come to the wrong place!