David Cameron has set himself a tough job to eradicate Islam (or Islamism as several people want to call it) from British society. I wish he succeeds in his endeavour, the job is tough but not impossible. Muslims and Islam (the old Islam) had existed for many centuries not only in Europe but across the world. So there is no question that certain ‘kind’ of Muslims are as human as any other religious or non-religious beings are.

The question however is what type of measures Mr. Cameron should take to eradicate the current ‘kind’ of Islam from British society. Here is my take on this.

The complete blueprint of plan has not yet been announced but from his speech few things stood out for me.

One somehow whenever someone talks about extremism or extremist ideology of Islam they set the highest ( worst of the worst) standard of extremism in the shape of ISIS or Taliban. Even people like David Cameron conveniently ignore the fact that they do not need to go that far in Syria, Afghanistan or Pakistan to see the ugly face of Islam. In fact the same ugly face was showing up in the audience of Mr. Cameron’s speech. There were young hijabi girls and bearded Muslim youth were among the audience. (I’ll talk in detail about this later in the article). 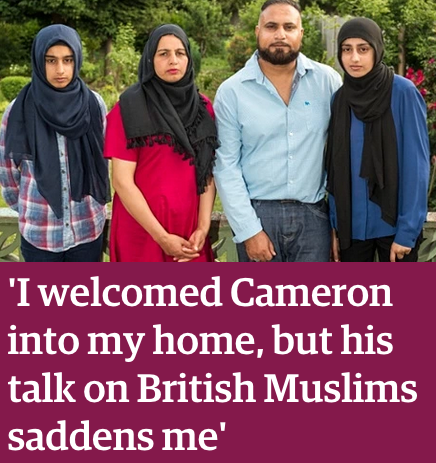 By setting the example of ISIS and Taliban as the bad Islam we actually approve the other forms of Islam. David Cameron thinks that Young British Muslims are attracted by the ugly society of extremists in Syria and Afghanistan, where these lads will be used as cannon fodder and girls will be used as sex slaves.

Mr. Cameron in his simplicity thinks that if we show these hijabi girls and bearded young lads the ‘ugly’ face of Islam they would stay away from extremism. No sir young British Muslims are not attracted by ISIS, they are attracted by Saudi society a utopia where every Muslim wants to live. It is not that hard to understand why Young Muslims are attracted to this. The objective of ISIS is to create a Saudi like society, therefore it is important to understand that the face of Islam that Mr. Cameron & folks are willing to accept in British society is the the real ugly face based on the same ideology on which ugly ISIS face is based. I will explain this further.

Two Mr. Cameron talked about the much hyped process of integration of Muslims in British society. It is very important to point out that most of the people particularly Muslims think this process means that British society should accept the symbols of Islam like hijab, beard, mosques, modesty, abstinence from alcohol, ban on blasphemy etc. as part of British society. They expect that in the name of religious freedom such code of life not only should be accepted but must be respected in such a way that any law against it could not be enacted.

Third point Mr. Cameron raised was that measures should be taken such that British young Muslims adopt the British values. Mr. Cameron does not realise that British Muslims want to exploit (not adopt) the British values of religious freedom, democracy and freedom of expression. They abuse democracy to get the barbaric laws implemented in British society by using their numerical strength in certain parts of UK, they exploit freedom of expression to spread hatred not only in their mosques but also in the media. They use religious freedom to practice disgusting acts including FGM (female genital mutilation), multiple marriages and women oppression. Whenever there is a talk about British values it is the extremist mullahs who clap loudly as they know that it is these *values* that’d allow them to prosper.

Islamisation Process History
It is very important to realise that Islamist ideology is glorified by the symbolism that was never part of a muslim society. If we look back in the history we’ll find that symbol of oppressions like hijab was considered as a matter of shame by any modern muslim woman. 50 years ago any well educated muslim woman would feel ashamed and oppressed if she had to wear hijab. Western dresses including mini skirts were common amongst the young muslim girls studying in Oxford and other universities. Take the example of Benazir Bhutto first Muslim women Prime Minister when she was studying in Harvard she used to wear mini skirt and attend parties in bars. Muslim women in Europe coming from India, Egypt, Turkey were as liberal as any other women. Alcohol in Muslims was never a taboo until not very long ago. Muslims in India, Turkey and other parts of the world were as drunkard as our Russian and Irish folks are.

Halal food was never an issue amongst Muslims 50 years ago. Take the example of Jinnah the founder of Pakistan who loved bacon in his breakfast. Common Muslim folks were part European as much as any other ethnicity could be.

It is in the past 50 years that hijab, beard in young boys, abstinence from alcohol and all such symbols of Islamism became associated with Muslims. We all know the process by which this happened. The process of Islamisation of Muslim society across the world was a deliberate and well planned effort at global scale. So-called Islamic scholars started writing disgusting translations of Quran, and created hateful Hadith in all world languages. Just look at the number of translations of Quran done in the past 100 years. Then on global scale these hateful material was propagated. I compare this hateful ideology with the one that Europe is familiar with.

Attractive Ideology?
Mr. Cameron and many other people wonder why Muslim youth is attracted by this inhuman ideology. It is not difficult to understand particularly for those who know about Nazism. Current Islam is based on the same principles on which Hitler’s Nazi ideology was based i.e. Superiority over all other religions (nations) and hatred against certain group of people. In case of Islam it is against almost every other religion including other Muslim sects like Shias, Ahmadis etc. Islamism is as much attractive to young Muslims as Nazism was to German youth in its peek period.

What is to be done?
So what Mr. Cameron should do in order to curb extremism/Islamism?

Here is what I would suggest Mr. Cameron to do :

1. There should be a consistent and considerable effort to marginalise Muslims who use these symbols. Laws should be made to ban hijab, reduce number of mosques.

3. Gay, Lesbian Muslims should be given proper coverage and recognition with their Muslim identity.

4. It is imperative that media should completely ban any glorification of hijab, beard and such other symbols. I can not believe that Sky/BBC find hijabi girls, and young lads praying in mosques for interview in any Muslim documentary and they show them in good light i.e. condemning ‘extremism’.

5. Just like translation of Quran and Hadith were done to create the current version of Islam, a similar global effort should be done to revert this. In order to do that new scholars should be encouraged to create Islamic literature based on counter narrative of what is currently called Islam.

6. TV channels like Peace TV who continuously run propaganda of the Islamist ideology of superiority over other religions and spread hatred should not be allowed in the name religious freedom and freedom of expression.

7. Immigration laws must be made stricter such that the flow of hardline Muslims is completely blocked.

David Cameron has set out a five-year plan to combat home-grown extremism, promising to tackle the “failures of integration” that has left some young Britons attracted to Islamic State and other fundamentalist causes. Speaking in Birmingham, the Prime Minister announced measures including:

A new Extremism Bill which will contain “narrowly-targeted” powers to target extremist “facilitators and cult leaders” whose aim is to “groom young people and brainwash their minds.

The introduction of a scheme to enable parents to apply to have their children’s passports removed if they suspect them of planning to travel abroad to join a radical group.

Writer is a born Muslim with extensive knowledge of Islam and has studied the Islamisation process in Pakistan, Egypt and UK. @pejamistri