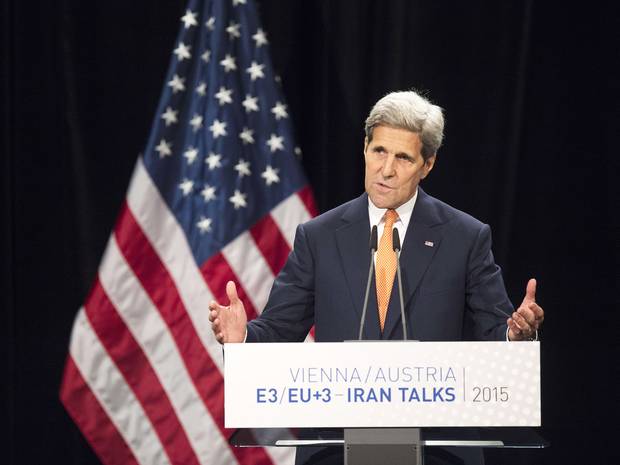 However much Bibi Netanyahu of Israel and the Gulf sultans rage at the Vienna agreement, the Arabs at least will suspect the truth: that the Americans have taken the Shia Muslim side in the Middle East’s sectarian war.

That’s not how it was represented by the great and the good, of course.  The headlines were simple. The Iranians agree to jam the breaks on their nuclear programme, pack up their centrifuges for a decade and cut back their uranium stockpile. All this in return for an end to the sanctions, financial goodies and bank transfers that Washington, the EU and the dear old United Nations had variously imposed on and witheld from the nation which that bearded old prelate Ruhollah Khomeini founded as an Islamic Republic 36 years ago.

A lot of chaps in white coats from the IAEA would be able to truffle through Iran’s nuclear plants – with or without sufficient prior warning to the Iranians, this wasn’t quite so clear.  But it was peace in our time.  Forget about Obama’s legacy and all the technical twaddle in the 80-page agreement – 100 pages in Farsi – because Iran is now on course to put on the dead Shah’s mantle as Policeman of the Gulf.  Middle East seismologists should get ready for the earthquake.

A “more hopeful world…an opportunity to move in another direction”, thundered the successor of Roosevelt and George W in the White House.  And just in case those pesky guys in Congress try to wreck the whole shenanigans, President Obama primly added that he would veto any measure to block his triumph.  No wonder Shia Iran’s studious President Ruhani preached his sermon that “constructive engagament works”.

Iranian President Hassan Rouhani told Iranians in a live televised address that ‘all our objectives’ have been met (Getty)
Goodbye, therefore, to the overwhelming influence of the Salafi/Deobandi Muslim nations which gave their sons to the 9/11 crimes against humanity and provided the world with Osama bin Laden, which supported the Taliban and then the Salafi/Deobandi Islamists of Iraq and Syria and – finally – goodbye to those emirs and princes who support Isis.  Washington is sick and tired of the decrepit princes of the Gulf, their puritanical lectures, their tiresome wealth (unless it’s paying for US weaponry) and their grotty civil war in Yemen. Shia Iran is now the good guy on the block.

Of course, appearances can be deceptive.  The raving loonies among the Revolutionary Guard Corps in Iran, the raving loonies in the Israeli cabinet and the raving loonies in the US Congress will try to gum up the works.  But here’s a thought.  John Kerry – not, to be sure, the brightest of US secretaries of state – has spent more time at the Iran talks in Vienna – eighteen days – than any of his predecessors have passed in one place since the Second World War.  I guess poor old Edward Stettinius had to spend nigh on two months at the San Fransisco Conference to create the UN Charter.  Yalta lasted only eight days, Potsdam 17 days.  No wonder Netanyahu is furious.

Benjamin Netanyahu criticised the US but faced rebukes at home for damaging Israel’s standing in Washington (EPA)
But there are other things afoot.  Iran is now in the top rank of those who can – and no doubt will – negotiate over the future of Syria and the Assad regime.  Its Guard Corps and its Hizballah allies from Lebanon are literally in the front lines against the Islamists.  Like as not, Iran will try to persuade the Obama administration to support Assad – however tacitly – if he wants to destroy the Salafi/Deobandi Isis as much as Iran does.  Arab sources who must know the truth say that Messers Kerry and Zarif have spent many an hour chatting on this very subject in Vienna.  Perhaps that’s why the talks went on so long.  Do we hear the clink of champagne glasses in Damascus?

Isis, of course – horrible, bloodthirsty apocalyptic Salafi/Deobandi Muslim Isis – will be almost as appalled as Netanyahu at Iran’s new deal.  It has always regarded Shia Iran as an heretical, apostate nation.  It has always condemned Iran’s murderous aggression.  And what did Netanyahu tell us? That Iran will now be able to continue its “murderous aggression”.  Wow.  To have Bibi and the lads from Isis on the same page – however briefly – is definitely one for the books.  And since Saudi Arabia takes the same view of Iran – the “serpent’s head” as one Saudi royal unkindly called the Islamic Republic – we’re in for a good piece of vaudeville, if nothing else.

But there’s no getting round Iran’s new status.  As Signora Federica Mogherini put it delicately in Vienna, Iran has “an historic opportunity to show…readiness to play a positive role in the Middle East – Iran has the potential to use its influence in the region in a way that conflicts can be resolved.”  She could have used just one word:  Syria.  And if the Vienna agreement is “a bad mistake of historic proportions” (Bibi again), such words may explain why Israel has been allowing Iran’s militant Sunni enemies to slip across the Golan from Syria into Israel for medical treatment every few days.

A protester’s sign is seen outside the White House on Tuesday (EPA)
There’ll be lots of soothing phone calls – be sure of this – from Obama to the throne-rooms of the Gulf.  Nothing to worry about, all for the best, trust us – just as Clinton trusted North Korea to junk its nukes when he was making the same noises a few years ago.  But all will remember – and Bibi will remember – that Obama is in the habit of walking away from car wrecks without even calling the insurers.

Wasn’t it Kerry who was going to solve the ancient Palestinian-Israeli conflict a few months ago?  And the moment it was obvious this hopeless cause would not burnish the immortal reputation of Saint Barack, he just walked away.  Didn’t even call the insurers – Messers Blair & Co – who anyway quickly closed for business.

And the one word that I bet went unspoken at Vienna these past two and a half weeks?  ‘Palestine’.