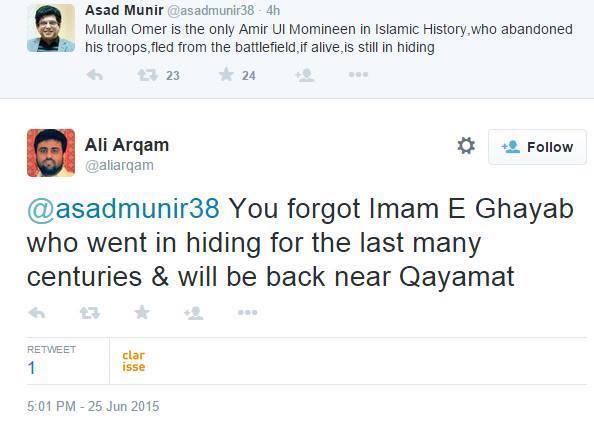 It seems that abusing holy personalities of Shia and Sunni Sufi Muslims is a norm now, not only for Takfiri Deobandi bigots but also by their commercial or fake liberal comrades.

It seems that Shia Muslims, a genocide facing community in Pakistan, should now get used to frequent abuses to their revered personalities by Deobandi bigots sponsored by the Beena Sarwar lobby. Ali Araqam showed his sectarian colours by wrongly impicating Imam Mahdi in his bigoted analogy. He was rightly reprimanded by a Shia activist who reminded him that Imam Mahdi’s ghaybat (occultation) is comparable to Jesus (Hazrat Issa)’s elevation to Heaven as per a Divine plan.

We believe that by abusing revered personalities such as Imam Ali and Imam Mahdi, fake liberal comrades of Tahir Ashrafi and Ludyanvi want to provoke Shia Muslims to respond in sectarian terms thus creating false Sunni-Shia sectarian binary that ASWJ and fake liberal want to enable.

We peacefully protest and consider such abuses and attacks as a part of a larger genocide, facing Shia and Sunni Sufi Muslims at the hands of Takfiri Deobandi terrorists and their commerical liberal enablers.