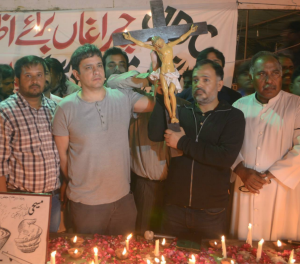 Below is a short speech I, Shaan Taseer, was asked to make to the House of Lords in the British Parliament. It was an honour, and as I made this speech on behalf of my countrymen, your comments and advice is most welcome.

Ladies and Gentlemen, distinguished guests. Thank you for this opportunity

In the last thirty years, ever since the Soviet invasion of Afghanistan, as a result of which, many seminaries were established and promoted for the purposes of recruitment and indoctrination to fight the Afghan war, there has been a systematic and premeditated genocide of Shias in Pakistan by well armed and well trained groups such as the Sipah Sahaba and the Lashkar-e-Jhangvi. This genocide has been witnessed and documented by the UN, Amnesty International, Human rights Watch, The Human Rights Commission of Pakistan and various Shia groups in Pakistan and abroad.

They are no accurate numbers, but some online Shia groups have documented 1,200 reported attacks on the Shia community since 2002. More worryingly, whereas thirty to forty attacks took place a year until 2011, in the last three years we have witnessed an average of over three hundred attacks a year. So the rate of killing has gone up exponentially, possibly coinciding with the Taliban gaining a foothold in Pakistans Northern Tribal areas, as well as the groups mentioned above, consolidating their positions after a ban on them in 2002.

Whereas the mainstream print and electronic media has described this as “terrorism”, this is not an entirely accurate or complete depiction of the picture on the ground. The groups who are exterminating Shias are not doing so to pressure the government or the public into accepting any political demands. The aim, for which they were formed, is to fulfill their religious duty to exterminate Shias and to establish a Sunni state in Pakistan.

These aims have been well documented over the years in many places. Firstly we have multiple Fatwas (religious decrees that are binding on their followers) to this effect. We also have pamphlets and other literature calling for the blood of Shias. The leaders of the organizations I have mentioned above, as well as the clerics of many allied seminaries have spoken publicly apostatizing Shias, which is all commonly available on social media, as well as having played on mainstream television. Furthermore, and most insidiously, the methods employed by the Lashkar-e-Jhangvi are systematic and methodical; to ensure the cleansing of a community. First of all they strike at places of worship. Secondly they target Shia neighbourhoods. Here the Shia Hazara community in the North of Pakistan is most vulnerable, as they live in ghettoised neighborhoods and valleys, and as such have seen the worst of this holocaust. Shias are particularly targeted when travelling together by bus, as that makes for an easy target. And thirdly, and most sinister, prominent members of the Shia community are identified and murdered. In the last year alone seventy Shia doctors were assassinated. Many more have left the country and sought asylum. So there is no ambiguity as to who is behind the genocide of Shias and what their motivations are. What’s more, these groups have proudly taken responsibility for many attacks and promised more.

Once it is established that someone deserves to die on the basis of religious differences, it doesn’t take long before a religiously mandated cleansing of Shias transmogrifies into genocide of all minority communities. And that is what is happening in Pakistan, at an increasing rate. Ahmedis and their places of worship have been attacked; Christian communities such as Gojra and Joseph Colony have been burned to the ground. Churches have been bombed all over the country, Hindu temples burned. My father was not killed by the Blasphemy law. He was killed for standing to prevent the genocide of minorities. The Blasphemy law is just one instrument in this bloodletting. If Aasia Bibi had been a Muslim woman there would not have been such a fracas over the issue, as there hasn’t been in the case of Junaid Jamshed, a pop star turned Deobandi television evangelist who made some offensive remarks on television, or Khalid Chishti, a cleric who desecrated the Holy Book himself, and placed the evidence to falsely accuse a twelve year old Christian girl. The blood lust we see in Pakistan today is for the minorities.

I have many Christian friends and it is sad to see that the current generation, more often than not, give their children Muslim names so as to prevent a life of discrimination. Right here we see the erosion of a cultural identity.

As I mentioned earlier, there is a complete denial of this genocide in all mainstream media. No newspaper or public figure has yet mentioned the word “genocide” in the context of Pakistan. This is despite the fact that the Genocide Convention of 1948, to which Pakistan is a signatory, describes even the intention, the incitement, the attempt or complicitness in genocide as part of the crime. We do, however, know there is nothing new about this denial. Experience from most theatres of genocide, including Rwanda, Bosnia and Darfur, shows that there is always reluctance on the part of society to acknowledge this crime. The reason for bringing in these comparisons is to show that Pakistan fits a pattern of behavior that is quite typical of theatres of genocide, such as the classification of communities, dehumanisation, ostracisation, organising and arming against them, the preponderance of hate material, and an apparent immunity to law. In the case of Pakistan, in addition to these warning signs, we also have the death of thirty thousand Shias.

Unlike the people of Pakistan, my audience lives in a country where the state protects their rights, and upholds the rule of law. You all therefore have the ability to express yourself freely without any risk to yourselves. Can I therefore please take this opportunity to ask you all in the name of humanity, to raise your voices against this genocide, with the British government, your MP’s, the Foreign Service, the Pakistan High Commission, the International media, and the British public. Change can only begin with awareness.

This is after all a human issue not a Pakistani issue, and genocide is perhaps the worst thing that mankind can do to itself.