This post is based on a conversation with journalist Aamir Hussaini.

The following is a snapshot of that conversation:

I think it makes some sense to publicly share my experience of working with Beena Sarwar, while I was the admin for one of her Team Pakistan type groups called Citizens for Free and Responsible Media.

I was very disturbed by the ongoing Shia Genocide in Pakistan and wanted to work with activists to highlight the killings of Sunni Sufi and Shia by Takfiri Deobandi groups like Ahle Sunnat Wal Jamaat (ASWJ) formerly known as Sipah Sahaba.

Through a mutual friend I was introduced to Beena Sarwar via a teleconference and immediately immersed myself in the causes headed by her. For example, there was an incident where Maya Khan, a Samaa TV anchor went after a young couple dating in a park in Pakistan and demanded for their Nikkah Nama (marriage certificate)

A great deal of my time and effort was devoted to the campaign for raising awareness against the moral policing and vigilantism by this TV anchor. We eventually got thousands of signatures on a petition and got Zafar Iqbal, the CEO of Sama TV to apologize for this act of vigilante journalism.

Beena Sarwar liked my work and although this type of activism was not at the top of my priorities, I felt that if devoted my resources and put together good value to Beena’s activism, perhaps she would also champion the cause of Shia Genocide.

This spun off into various groups and pages all of which I was administering and devoting a lot of time and effort to and sometimes personal resources as well. The Citizens for free and responsible journalism is one of them.

It always amazed me how the “liberals” in such groups would get all excited about the “vigilante Aunties” of the Maya Khan kind but stay quiet of the genocide of Shia Sufi Sunni and Ahmadis. It never made sense to me.

For a while, and reluctantly, Beena and her friends would re-tweet good posts and articles on Shia Genocide but they were very allergic to LUBP and I wondered why, because the LUBP posts on this topic made the most sense to me. And eventually I started contributing to LUBP blog as a writer.

It was during this time that LUBP took on Tahir Ashrafi for his derogatory comments against Ahmadi Muslims and Shia Muslims. The ensuing standoff between the notorious mullah, his ASWJ friends and some liberal champions on one side vs. Sunni, Shia, Ahmadi and atheist activists on the other side made it to the newspapers. The now-former editor and founder of LUBP was publically threatened with dire consequences to his family in Pakistan and forced to resign.

Imam Hussain (as) said: “Remember me when the truth becomes sad, sad and alone” https://www.youtube.com/watch?v=yDLHhvDKwnc

The older team at LUBP had liked the fact that I stood alone outside Saudi embassy with my 8 year old son, my wife and my 13 year old niece. All the mosques promised to come but at the last minute they were concerned about getting Saudi visas because HAJJ (pilgrimage to Mecca) is obligatory so they could not join me.

When I became LUBP editor, I found that Beena was ok with most of the LUBP posts but wanted final say on any post that had to do something with Najam Sethi. We continued to chat every day and posts critical of Sethi were being censored on the recommendations of Beena. Soon it became clear to me that bloggers at LUBP were correct in exposing Najam Sethi based on the merits of the arguments they used. Cutting the long story short this was the end of my association and friendship with Beena Sarwar.

Similarly, Beena was also no longer interested in doing any Shia genocide protests. She was no longer interested in using the #Takfirideobandi hash tag either. Surprised, I asked Beena about it. I told her that might have had difference of opinion of Sethi, but the Shia Genocide cause shouldn’t suffer. But I was astounded at her reply which was plainly that it was a quid pro quo. Or you scratch my back I’ll scratch yours.

The take home message was clear:“I will highlight Shia genocide by Takfiri Deobandi militants only if you stop criticizing Najam Sethi”

In Ilmana Fasih’s recent backhanded apology, she claims to have only met Beena twice. This is the same Ilmana who eventually took over my role as admin of the many groups that were being previously administered by me on behalf of Beena. She is also Beena’s point person in the JANG/GEO sponsored, Aman ki Asha. Ilmana’s point was based primarily on her assertion that since they have just met twice, she does not know Beena well.

This does not ring true. I want to inform everyone, that after working on so many projects with Beena and communicating daily with her via phone and skype and social media, I cannot make that same point! And I have not even met Beena once in person!

It should be no surprise that Beena is continuing to run groups of activists. When her Nasibi Deobandi lackey showed her true colors by abusing all Syeds, Imam Ali (as) and Bibi Fatima (sa), it was Beena to the rescue. I personally know her modus operandi and her writing style so closely that I can say without a shadow of doubt that it was in fact Beena even wrote this back handed apology. 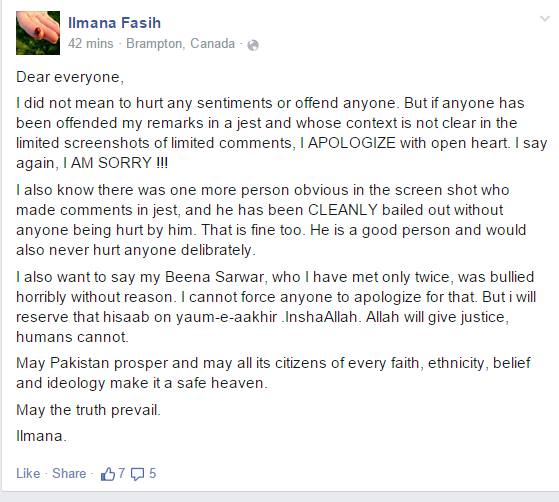 In this whole episode, Beena played a very nasty role. Instead of admonishing her protégé Ilmana, she called people up and formed a posse of social media activists against us. It was probably on her advice that they played the blasphemy card and falsely accused is of whipping a blasphemy charge against Ilmana, when no one had even used this term. Shazia Nawaz started ranting in a manner only she could understand. Even more reasonable people like Mohsin Sayeed were at our throats.

Later, all of this culminated in a backhanded and conditional apology by Ilmana Fasih, in which she didn’t apologize for her abusive comments. She only submitted a conditional apology, with an ‘IF’, for having hurt some people. But we still accepted the apology, and rested our case.

But it needs to be mentioned that the bigger crime in this episode is the cover up of Ilmana’s blatant abuse and hate speech against the beleaguered Shias and their revered personalities by Beena Sarwar and Najam Sethi mafia. It is the bullying, harassing and silencing of Shia activists by this mafia that works only on quid pro quo basis. My story is not unique, I came to know of more than one bloggers at LUBP who were co-opted and threatened, some quit others sold out to the Beena-Sethi Mafia.

These people are corrupt to the bone marrow and maintain no values, morals or principles. And last but not the least, it is about the promotion and mainstreaming of takfiri nasibis like Ilmana Fasih, Tahir Ashrafi, Javed Ghamidi and Ahmed Ludhyanvi. The Beena-Sethi mafia promotes takfiri murderers and their direct and indirect supporters as prophets of peace, which is most worrying.

It is also relevant to mention here that Beena Sarwar is always on the hunt for information on the nom de plumes of LUBP writers and editors. She would also approach me to know the names of those writing for LUBP using pen names. I later found out that she had even gotten to some writers in LUBP in a failed attempt to destroy LUBP from within. This harassment and prying on the LUBP has also led to some of LUBP bloggers receiving direct death threats for which the Beena-Sethi mafia and their friends are directly or indirectly responsible.

I also want to make it a point that not only the electronic or print media, but even the social media runs or works on a system of favor and self-interest. There are most certainly some Islands of freedom and a few free and brave souls, but powerful mafias like that of Beena and Sethi have hijacked even this sphere. They co-opt aspiring activists, who ingratiate themselves in order to win the favors of the powerful czars of social media for their career advancement or even just popularity and acceptance.

One might ask that who gives Beena Sarwar or Najam Sethi the right to dictate the happenings on the social media to the extent where they decide what statuses people should post or delete? Does bullying only apply on overtly forcing people to do something, and not apply on cajoling and seducing people through false promises?

Despite all this, despite being abused and falsely blamed, and despite betrayals, we at LUBP will stand for the truth even if we stand alone. This is what I am about and this is what LUBP is about. 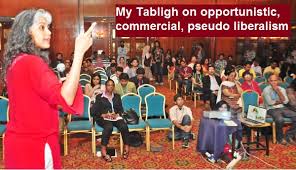