Aftab Bahadur Masih’s last letter: How is hanging people not charged with terrorism going to stop ASWJ-TTP’s terrorism in Pakistan? 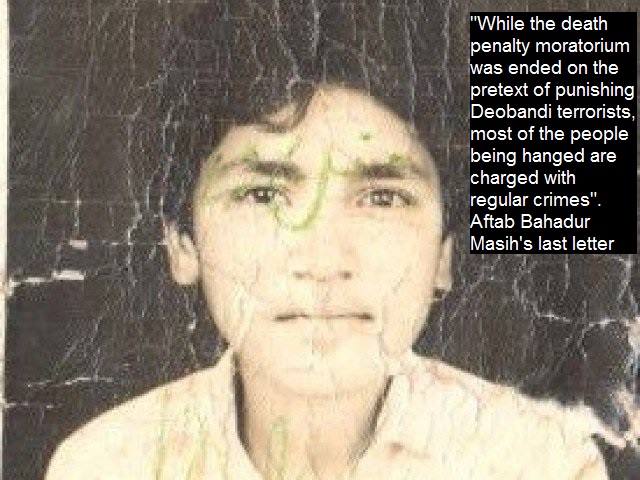 While the death penalty moratorium was ended on the pretext of punishing Deobandi terrorists, most of the people being hanged are charged with regular crimes – Aftab Bahadur Masih’s last letter.

“I just received my black warrant. It says I will be hanged by the neck until dead on Wednesday, June 10. I am innocent, but I do not know whether that will make any difference. During the last 22 years of my imprisonment, I have received death warrants many times. It is strange, but I cannot even tell you how many times I have been told that I am about to die.

In truth, I die many times before my death. I suppose my life experience is different from that of most people, but I doubt there is anything more dreadful than being told that you are going to die, and then sitting in a prison cell just waiting for that moment.

For many years – since I was just 15 years old – I have been stranded between life and death. It has been a complete limbo, total uncertainty about the future.

I am a Christian, and sometimes that is difficult here. Unfortunately, there is one prisoner in particular who has tried to make our lives more difficult. I don’t know why he does it.

I got very upset over the Christian bombings that took place (at the hands of Deobandi ASWJ terrorists) in Peshawar. This hurt me deeply, and I wish that Pakistani people could possess a sense of nationality that overrode their sectarianism. There is a small group of us here who are Christians, just four or five, and we are now all in one cell, which has improved my life.

While the death penalty moratorium was ended on the pretext of killing (Deobandi) terrorists, most of the people here in Kot Lakhpat are charged with regular crimes. Quite how killing them is going to stop the sectarian violence in this country, I cannot say. I hope I do not die on Wednesday (10 June 2015), but (unlike Deobandi ASWJ terrorists) I have no source of money, so I can only rely on God and on my volunteer lawyers. I have not given up hope, though the night is very dark.”

One response to “Aftab Bahadur Masih’s last letter: How is hanging people not charged with terrorism going to stop ASWJ-TTP’s terrorism in Pakistan?”