Home  »  Featured • Original Articles   »   Due to my support to minority rights, I have been threatened by the Sipah-e-Sahaba (ASWJ) and Taliban (TTP) – Hamza Ali Abbasi

Famous Pakistani actor, model and film director Hamza Ali Abbasi has revealed that due to his support to minority rights, he has received threats from the banned terror outfits including Sipah-e-Sahaba (aka ASWJ) and the Taliban (TTP). In a statement on social media, Mr Abbasi said that he is the only persons in media who has been vocal about minority rights, to an extent to have been threatened by TTP twice and once by Sipah e Sahaba. He said that he was also against those who chose to only and solely focus on minorities and give a blind eye to the fact that terrorism has plagued whole country, and the majority too has suffered (eg, 45,000 Sunni Sufis and Barelvis killed by the TTP-ASWJ terrorists).

He said that he is against those who only talk about Palestine or Rohingya but remain silent on atrocities against Sunni Sufis, Shias, Hazara Shias, Ahmadis, Christians, in fact all communities of Pakistan. He said that when one only and solely speaks for those 30% who have died because they are a minority, one should also take into account the sacrifice of those 70% who belong to majority Sunni Sufi population. He said that terrorism was not only a minority-related issue, all Pakistani communities had sufered at the hands of the Takfiri Khawarij of the ASWJ-TTP.

By clearly naming and condemning the ASWJ and TTP, Mr Abbasi has caused disturbance to some of Pakistan’s Fake Liberal champions, the promoters of Ashrafi and Ludhyanvi, who will hardly name Takfiri terrorist groups like Sipah Sahaba and instead routinely revert to dishonest binaries like “Iran vs Saudi” or “Sunni vs Shia” to perpetuate false moral equivalence between terrorists and their victims. 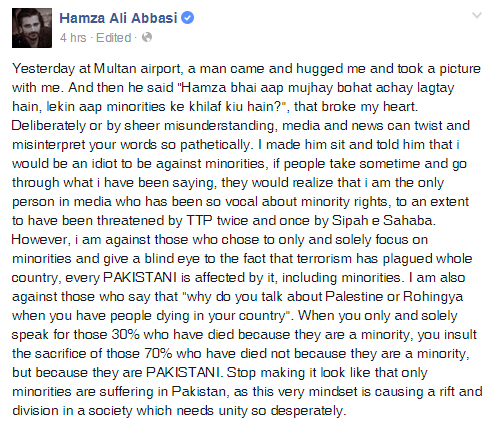