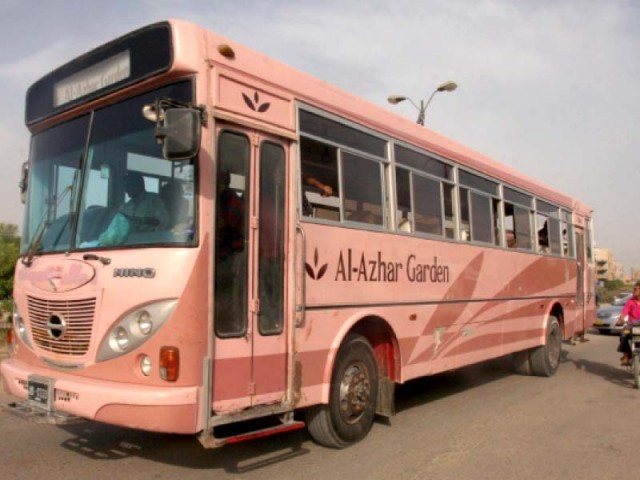 As many as 45 men and women belonging to the Ismaili community were killed in the deadly attack on this bus in Safoora Goth on May 13. PHOTO: FILE

KARACHI: It was the perfect crime. So perfect that it had to be video-taped. Saad Aziz was to be the cameraman. He was supposed to record the ‘execution-style’ killings of the 45 members of the Ismaili community in the bus attack in Safoora Goth.

Aziz, one of the brains behind the massacre, was among the six assailants who boarded the ill-fated bus at around 9:10am on May 13. The victims, including 17 women, were mostly shot in the head with 9mm pistols.

Aziz entered the bus accompanied by five of his accomplices, while several others stood guard outside. Four of them, including Aziz and Tahir Minhas, were tasked with carrying out the executions while the other two took positions at the driver’s seat and the exit door of the bus.

“I had a pistol in one hand and a camera in the other,” narrated Aziz while recording his statement before the investigators. “I was supposed to film the entire episode.” The plan, however, failed. The camera fell from Aziz’s hand during the gunfire and the memory card was soaked in blood. “There was no footage recorded in the camera when I checked it after the execution. Only the roof of the bus was filmed,” said Aziz.

He confessed to have killed at least seven members of the Ismaili community in the bus carnage that fateful day. Another 19 victims were shot dead by Minhas, while the rest were killed by their two companions.

Been there, done that

This was not the first mission for Aziz. He had received special training for such executions and had been involved in various killings in the past, including the murder of social activist, Sabeen Mahmud, in Defence Housing Authority. Investigators claim Mahmud was killed for multiple reasons — for organising a Valentines Day rally and for campaigning against the Lal Masjid cleric.

A new era of terror

Terrorism is not a new phenomenon in Karachi — a city where attacks on law enforcers, foreigners, religious scholars, members of political parties and people from different minority communities have been a norm for the last few decades. The Safoora Goth bus carnage, however, set new records in terms of brutality. It was a major scare for the country’s already oppressed minority communities and a wake-up call for the security agencies.

Within a week, the Counter-Terrorism Department (CTD) arrested four of the attackers. Unfortunately, the case is still hanging in the balance and dozens of accomplices of the arrested suspects are still on the run.

Two weeks on, the ‘key’ suspects held in connection with the attack have yet to be implicated in the case. Instead, they are being tried in other cases of attempted murder, assaults on law enforcers, possession of illicit weapons and explosives.

When the case came up before the anti-terrorism court-II for the second time on June 5, investigation officer (IO) Fayyaz Qadri was asked what was causing the delays in charging the suspects in the main case. He responded that the joint investigation team’s (JIT) report was incomplete and they needed three more days.

The investigators have yet to disclose the name of the group with which the suspects are associated. They are certain, however that the group has no links to the alQaeda in the Indian Subcontinent. “The group is being run from Helmand, Afghanistan, where spy agencies of different countries are operating,” explained the CTD incharge, Raja Omar Khattab, who had arrested the attackers, while speaking to The Express Tribune.

He added that there were other highly-educated people in the group such as Saad Aziz and they were trying to arrest all of them.