Home  »  Blogs Cross posted • Newspaper Articles   »   No, Hamza Ali Abbasi, you cannot shame us for talking about Pakistan’s minorities too! – by Kashif Chaudry

They say charity begins at home. But for many right-wing Pakistanis, it seems as if home is not Pakistan; it is the Muslim Ummah – just the Sunni-identifying part to be precise. Like the rest of us, these fellow Pakistanis seem to be rightly concerned about the current plight of the Rohingya Muslim minority in Burma.

However, they don’t seem to bat an eye on the treatment meted out to our own minorities on home soil. Tell them the Rohingya Muslims identify as Shia Muslims or Ahmadi Muslims, and the fury and passion will magically dissipate in an instant. Some might even start justifying the persecution. For these right-wing Pakistanis, hypocrisy and double standards continue to be prominent themes even in issues related to human persecution.

Sadly, some celebrities and televangelists aid in promoting these same double standards. Mr Hamza Ali Abbasi is one such character. In a social media post from yesterday, he rightly praised the media and government on talking about “our Rohingya Muslim brothers and sisters”. Indeed, the Rohingya Muslims are one of the most persecuted minority communities worldwide and deserve our voice.

However, Mr Abbasi’s duplicity showed in the very next part of his statement. He cautioned readers not to start a “rant”, referring to the voice against the persecution of Pakistan’s own Ahmadi, Shia, Christian and other minority communities. He went on to shame those who condemn the persecution of minorities in Pakistan alongside the persecution of the Rohingyas.

Why can’t we condemn all persecution of all peoples alike? Why is it shameless to speak up louder (‘rant’) for our fellow marginalised citizens here at home?

Mr Abbasi then belittled the horror faced by our Pakistani minorities as “by few hell bound terrorists”, comparing it to the important role of state in the case of Burma’s persecuted Rohingya Muslims.

I do not think Mr Abbas harbours any hatred for Pakistan’s Shias, Ahmadis, Christians or Hindus etcetera. I think he only suffers from the same ignorance and pseudo-nationalism that has blinded the majority of Pakistan’s right-wing to the plight of our own countrymen – folks perceived as different from the accepted majority in one way or the other.

Far from silencing those few who boldly speak for Pakistan’s minorities, the case of the Rohingyas must serve as a reason to expand our support for them. Injustice in any part of the world must not be used to stifle activism elsewhere, but to fight injustice everywhere, consistently.

Let’s take a look at the situation in Burma.

According to estimates, there are about a million Rohingya Muslims in Burma – constituting two to three per cent of its total population. Since 1982, Burmese law has denied them the right to citizenship, despite their presence in the country for generations. As such, most of them cannot obtain government jobs or serve in official capacity in the army. The government insists the Rohingyas register as “Bengali”, and forfeit their right to self-identify as they wish. This decades-long institutionalised discrimination has served as a fertile ground for violence by hard-line Buddhist nationalist groups. During the Rakhine state riots in June 2012 that sparked the current wave of unrest, around 60 Rohingya Muslims (and 30 Buddhists) were killed. In January 2014, extremist Buddhist mobs were accused of slaughtering at least 48 Rohingyas in Arakan State. Hundreds of thousands have since been displaced both internally and to neighbouring countries, especially Bangladesh. Recently, there has been a surge in emigration to adjoining states, but blockade by these countries has left hundreds of Rohingyas stranded on water, many dying of hunger or drowning at sea.

There is no doubt that their plight is real and deserving of our voice, and to not lend our voice to them is criminal. However, the plight of our own citizens, who continue to face increasingly brutal persecution by the day, is no less real and equally deserving of our prompt attention. Silence in this case is equally criminal, if not more so. And quite frankly, we can do much more for our minorities here at home if we had the same will.

Take Pakistan’s peaceful Hazara Shia community for example. The Hazara Shias have been the target of a brutal campaign by militant outfits like the Sipah-e-Sahaba Pakistan (SSP) and Lashkar-e-Jhangvi (LeJ). These extremists have threatened to make Pakistan “a graveyard for the Shia Hazaras”. There are around 500,000 Hazara Shias in the city of Quetta alone.

According to an estimate, over 1,500 have been killed since 1998, a hundred of these just in the last six months. Thousands have fled Pakistan, some risking their lives at sea, just like the Rohingya Muslims. A few years ago, 54 Hazara boys drowned when their boat sank near Indonesia. Another 23 Hazaras lost their lives when their boat capsized near Malaysia around the same time. Forced by circumstances and deserted by their state, they were leaving Pakistan illegally to find a secure home elsewhere.

In a recent message to his gang, a leader of Takfiri Deobandi outfit LeJ-ASWJ said,

“Just as our fighters have waged a successful jihad against the Shia Hazaras in Afghanistan and butchered them, our mission [in Pakistan] is the abolition of this impure sect and people, the Shias and the Shia Hazaras, from every city, every town, every village, every nook and corner of Pakistan.”

While the Shia community faces such barbarity, their killers roam free in Pakistan, and are considered power brokers by many at the top of the political ladder. Note the similarity with the Burmese state and its appeasement of extremist Buddhist nationalist groups operating there.

Then we have Pakistan’s Ahmadi Muslims, who number around five million according to most estimates. The Ahmadis have been denied their basic right to self-identity since 1974. The state did not stop here. In 1984, an ordinance was issued, denying the Ahmadis all rights to religious freedom. Just as the Rohingyas, this institutionalised discrimination created a fertile environment for violence against Pakistan’s Ahmadi community. Hundreds have since been killed, and thousands imprisoned for “crimes” such as saying the Salam, reading the Quran, identifying as Muslim, referring to place of worship as a mosque etcetera.

Discrimination in public institutions is also commonplace. Not far back, all 23 Ahmadi Muslims at a medical school were rusticated for their faith. In some universities, Ahmadis are forced to keep separate dining areas. The Ahmadis have also been systematically disenfranchised, unable to vote for decades. And just like the Rohingyas, tens of thousands of Ahmadis have had to flee the country after facing threats from extremist groups. These groups – like the extremist Buddhist groups – call for further restrictions on the freedoms of Ahmadis and routinely incite violence against them.

If you agree with the premise that all humanity deserves our voice, then let us remember to launch this charity at home. If not, feel free to ignore my ‘rant’. 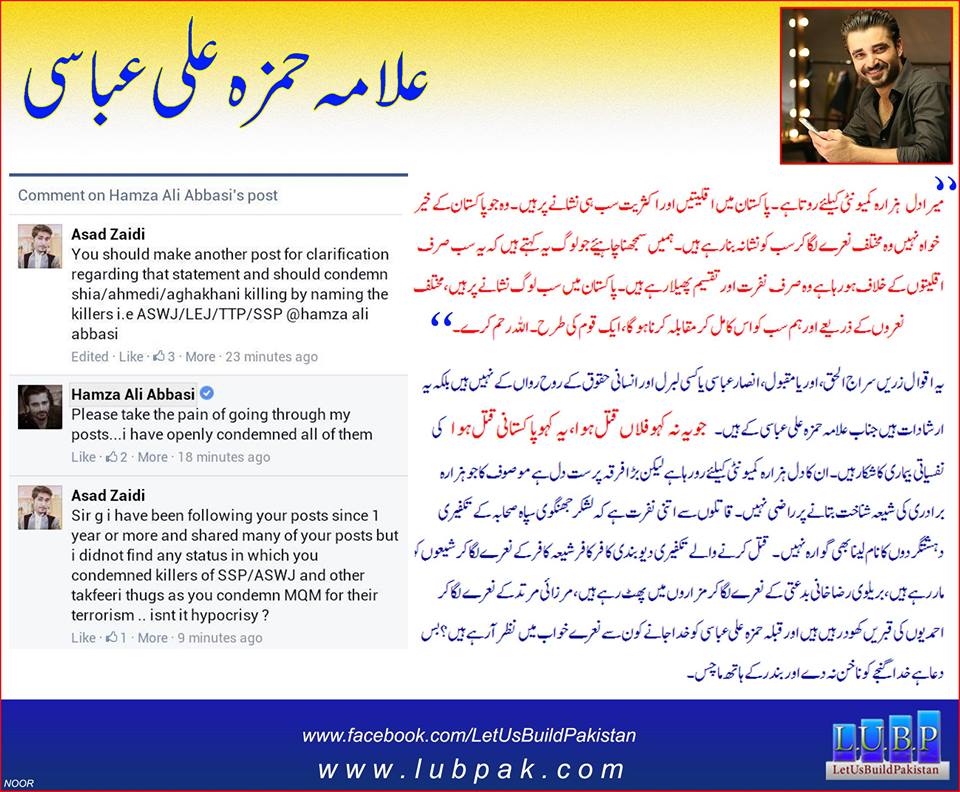 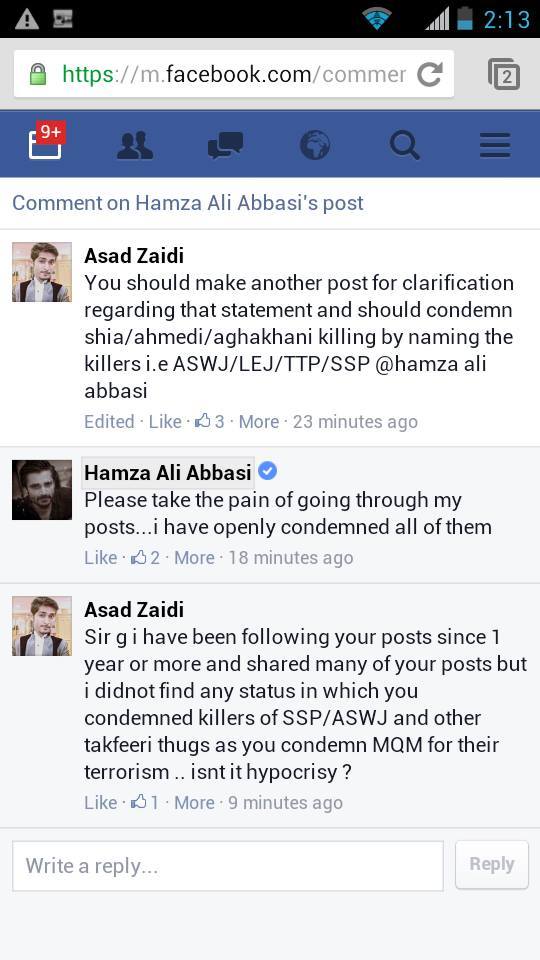