Home  »  Featured • Newspaper Articles   »   Dear Wajahat S. Khan: You did know about Bol, but you didn’t give a damn! 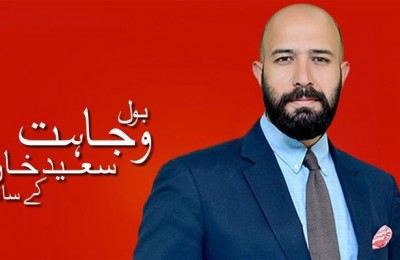 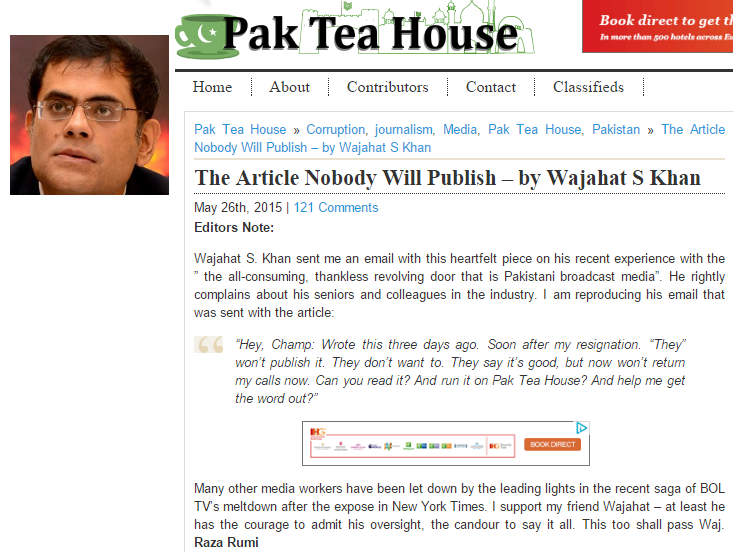 Editor note: An edited version of this article was published in The Nation and then removed. LUBP located the original source  of this rebuttal and is cross posting it. LUBP awaits the day when Pakistan’s other media conglomerates such as Geo/Jang and Express are not only held accountable to the same standards being demanded of BOL/AXACT but are also taken to task for nepotism and Tax evasion with the alleged contrivance of some Sunpreme Court judges.  LUBP awaits the day when Declan Walsh -an offspring of the Sherry-Sethi lobby- highlights how ISIS affiliated Deobandi terrorists and hate mongers like Ludhyanvi and Ashrafi are provided an unchallenged platform by the Hamid Mirs and Najam Sethis of Geo/Jang Group. We also hope that Mr Walsh will write a report on the AXACT awarded PhD degree of Geo TV’s Vice President Aamir Liaquat Hussain. 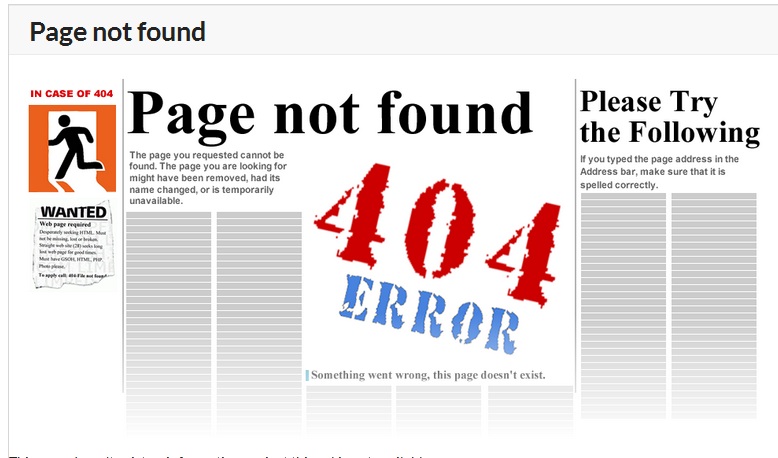 So, I recently came across this NAUSEATING article by Wajahat Khan, a “defence analyst” par excellence (or so he would have you believe, if you look at him strutting around on your screen with a self satisfied smirk on his face, the man is nothing if not in love with himself), in which he COMPLETELY shifts blame on others, under the guise of contrition and shame (which he never shows throughout this long drawn bullsh*t of an article). The article was published by blogger Raza Rumi’s Pak Tea House blog with a flattering note in support of Wajahat.

For reference, the dude, along with some of his “similarly minded” (read, completely for sale and totally up for grabs for anyone who could give them such a high pay raise) colleagues decided to join a yet to be launched television station called “Bol”, which was owned by Axact. I think it’s enough to say that Axact has always had a dubious reputation and its credibility was COMPLETELY demolished by an article in the New York Times by Declan Walsh. And, after the typical “it was a conspiracy against us by the other media houses” noise died down, followed by a still ongoing investigation that has already acquired quite a bit of incriminating evidence against the media house and the release of documents by Declan Walsh, the typical exodus of rats from the sinking ship has begun.

It was only a matter of time before one of these “journalists” (and I use that term VERY loosely) decided to come up with a sham apology cum explanation of just what made him/her join and how it wasn’t his/her fault. Surprise Surprise, it was that smug little , Wajahat, who decided to be THAT guy.. you know, that guy who hangs out with the “cool kids” cos they can afford good dope and he totally wants some of that? And who totally ignores the fact that they’re complete Idiots who bully others and bunk classes and are involved in arson? You know, THAT guy who complete turns into a crying snivelling mess the MINUTE the cool gang is caught stealing from a store, and starts telling the cops about how he has a shitty home life, and how he only looked up to these people, and only wanted to be seen as cool, and how it’s not his fault, because, again, his mom drinks and his dad is in jail, and the OTHERS made him do it? Yeah… HIM!

The whole guise behind printing that not-even-worth-being-toilet-paper-had-it-been-printed-on-paper article on Raza Rumi’s blog was just to be that person who points his finger at EVERYONE other than himself for whatever has hit the fan. Yes, he idolised those other “journalists” (again, I’m using it VERY loosely), you know, the ones who were younger than him, and this one other older dude, and yes, he completely was kicked out and left many other media houses before being rehired by one of them for 12 years, cos hey, what’s a brothel without its whores, eh? And yes, he COMPLETELY ignored all the warning signs and joined the network cos he was being paid a lot. And, OF COURSE, he was completely won over by the luxurious lifestyle promised to him. And, for sure, he forgot to actually be a journalist and research a bit about just how this small media house that hadn’t even begun its operations could afford to pay him and the host of other greedy “journalists” who’d joined. But NO, he (his own words) MAY HAVE POSSIBLY let his country and those who trusted him down, while others not only “let themselves down”, they also let HIM down. And oh, btw, he’s from a middle income broken home, who just happened to go to some good institutes.

How is his family history relevant you say? I don’t know, except maybe Mr. Khan wants to humanise himself, while completely dehumanising those who have “let him down”, from never naming his “idol”. which everyone knows is Kamran Khan, but who Wajahat Khan is too idiot to name, who let poor old vulnerable and completely naive Wajahat down, to listing the deviancies of his previous employees, he just draws this picture of complete and utter moral deviants who want nothing but money and power, while telling us about what a “struggle” it was for him. This coming from a guy who went to Harvard and University of Michigan (yeah, because you were that much of a middle class guy, right?), and who describes himself as “Known for his tough, investigative reporting, Khan has pioneered the study and use of social media in Pakistani broadcast, empowering his audiences” in his LinkedIn Profile,

No no, Wajahat is this poor little lamb, who just lost its way and MAY HAVE POSSIBLY done something wrong. He even tells you about how, during his 12 years career, he quit his work for “principle stands” as well! Please ignore the fact that he also says how sometimes it was for being offered more money, and a few times he was fired, and that when you add that up to 7 job changes, you’re left wondering just HOW MANY principle stands were there. Because hey, he wants to put it out there, lest you take him for a completely money hungry ethics be damned kinda “journalist”, you know.. the kind he showed himself to be when he joined Bol? Yeah, because facts are inconveniences to the narrative that Mr. Khan comes to you with.

After reading through the complete LACK of apology, but a lot of shamefaced hemming and hawing in the act of being a greedy little git, which is this article. I came to read the comments. While most of them took this guy to task for being the spineless a—— that he is, some of them went ahead with the “I’m so sympathetic to your plight, Dear Wajahat. Nobody knows what you’re going through. You’re definitely the bigger man for apologising and realising your mistake, because it takes a BIG man to do such soul searching” rhetoric, that made me SICK.

Aren’t you, Wajahat Khan, amongst that ilk of people in our midst who go about not only “reporting” on people but actually harassing them when they haven’t done their job “properly” (and that, too, only in your inexpert opinion)? Aren’t you self-proclaimed consciences of the society who go about making us see our own face in the proverbial mirror? Doesn’t it strike you, with your intelligence, pomposity and wit that you seem to think makes you god’s gift to mankind, as maybe SLIGHTLY ironic, that you were caught with your pants down, and you did EXACTLY what those you “reported on” were doing? i.e. pointed at everyone else’s bare ass and going all “but see, even those people are doing it, naaaaaaa, and they’re more powerful than me, so please look at them before you come to me”, whilst completely pretending that we couldn’t see YOUR face?

Your article is NOTHING like the apology you want to make it seem.. it is NOT the result of a “soul searching” irrespective of what you get your friends to write on your s–t-article (yeah, I hyphenated it, cos I feel this word needs to be coined just for that piece you wrote). You went to work at Bol because they paid you more, CONSIDERABLY more, and you didn’t give a damn where and how the money was coming to you, just as long as it came to you. If it hadn’t been for that pesky Declan Walsh and that “yahoodi saazish” of a New York Times, you’d still be working at that exact same place, and won’t’ve given any more of a shit than you did when you agreed to work for them. So please, spare us the fake contrition which is nothing more than a ploy to get back into the field and look for “greener pastures” wherever they may be, so that you can tell us again from your moral high horse about what abject sinners we all are, while you and your ilk are the paragons of virtue and all things pure and holy. 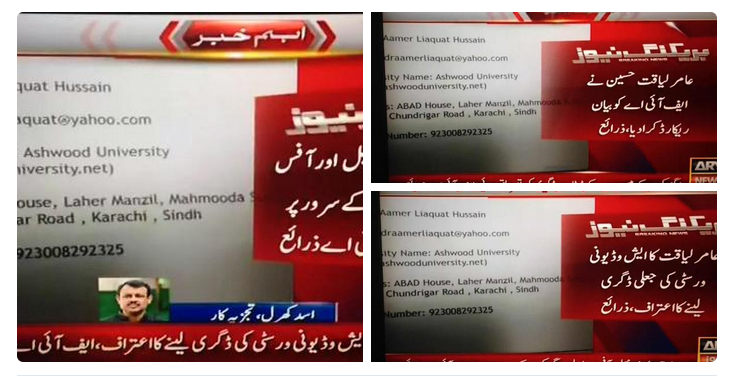