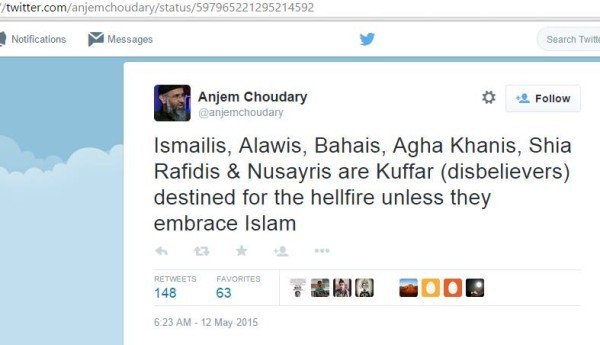 There are some glaring omissions in Faisal Devji’s The Anatomy of a Massacre ; the most important of which is where the author does not even once mention the common Deobandi identity of ISIS-affiliated, interconnected groups like ASWJ-LeJ/Jundullah/Taliban that routinely carry out such massacres.

While the article mentions in passing the over arching Shia identity of the Shia Ismailis massacred by Takfiri Deobandi militants at Safoora Goth, it then skips over this crucial detail while clinging to tenuous connections in Syria and Iraq. The article also omits any mention Saudi Arabia which is home to a significant Ismaili Shia community and whose Wahabi rulers are the primary sponsors and financiers of Salafi and Deobandi terrorist organisations like Daesh/ISIS, FSA/Al Qaeda/Al Nusra Front, ASWJ-LeJ, Taliban, Boko Haram and Al Shabaab.

While referring to the pamphlet left by the Deobandi murderers at Safoora Gate, Faisal Devji conveniently omits mentioning Saudi aggression against Yemen-  Yemen is also mentioned in that pamphlet. Devji also fails to mention how Saudi Arabia treats its Non-Salafist populations that also includes a significant Shia Ismaili population. He selectively mentions the reasoning and justification provided by Deobandi terrorists involved in the Safoora Gate massacre to subtly link Syria and Iran but not Yemen and Pakistan which are also mentioned. And Saudi Arabia which needs no further mention!

The article also fails to mention the targeted murders of Shia Ismaili professionals in the last few years in Sindh.

For decades, South Asian Shia Ismailis have consciously separated themselves from the larger Shia community. Like other elites, they too tended to blame the Shia victims of genocide instead of the Takfiri Deobandi groups committing the genocide.

The author makes a another significant omission and obfuscation where he obliquely limits the ethnic Khoja business and trader communities as Ismailis and again omits that even amongst Khojas, a significant percentage are Twelver (Isnashari) Shias who might even represent the majority of the Khojas. Devji fails to also mention that there is a smaller Sunni Khoja community in India and Pakistan. Shia Isnashari Khojas – the founder of Pakistan, Jinnah himself was a registered member of the Khoja Shia Isnashari (Twelver) Jamaat.

Scores of Khoja Shia Isnashari doctors, businessmen and activists have been target killed by Deobandi terrorist groups like ASWJ- apparently for Faisal Devji, they are not even worth a mention.

Faisal does make a pertinent observation

“Even in Pakistan a television anchor was unable to identify Ismailis as a Shia sect, thus illustrating how little the liberal elites, to whom the community’s outreach and public relations exercises are largely targeted, have been influenced by it. Often unwilling to distinguish between sects on the principle that they are “all Muslims,” or Pakistanis, liberals are sometimes more ignorant about their own society than the militants who attack it.”http://lareviewofbooks.org/essay/anatomy-massacre/

Its unfortunate that he cannot grasp the irony of this observation in his own selective and ignorant discourse on the tragedy of the Safoora Gate massacre of Shia Ismailis.