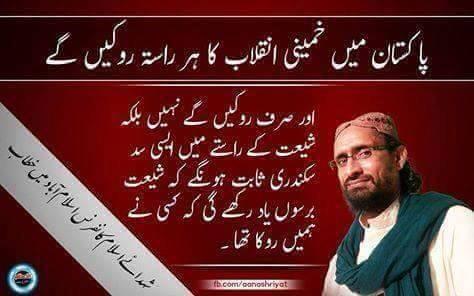 So when will the FIA go after ISIS-affiliated Deobandi terrorist leaders of ASWJ-LeJ like Aurangzeb Farooqi with the same fervour that they are going after AXACT?

When will Pakistan’s “liberal” champions highlight the one-sided hate speech, incitement to violence and a disregard for the law by Deobandi terrorists like Aurangzeb Farooqi?

Will they stand up to ASWJ-LeJ In the same way that they are promoting themselves as champions of journalism and ethics by going after a tech company that fooled Americans into buying a degree from “Columbiana” University?

Will ‪#‎DeclanWalsh‬ undertake the arduous research => google “Aurangzeb Farooqi hate speech” “Shia Genocide” => collate results => draft 700 words = > completed in 45 mins) for an unbiased article on ‪#‎ShiaGenocide‬ in the same way that he wrote on AXACT and which was then promoted by rival media groups (JANG, Express etc) to settle scores with an upcoming media group.

Will those activists who place a greater emphasis on populism as opposed to principle ever realise that they are being used for selective causes. And that the “Lack of Proportion” syndrome (thanks پیجا مستری for capturing this so brilliantly) will never grant them the legitimacy they pine for.