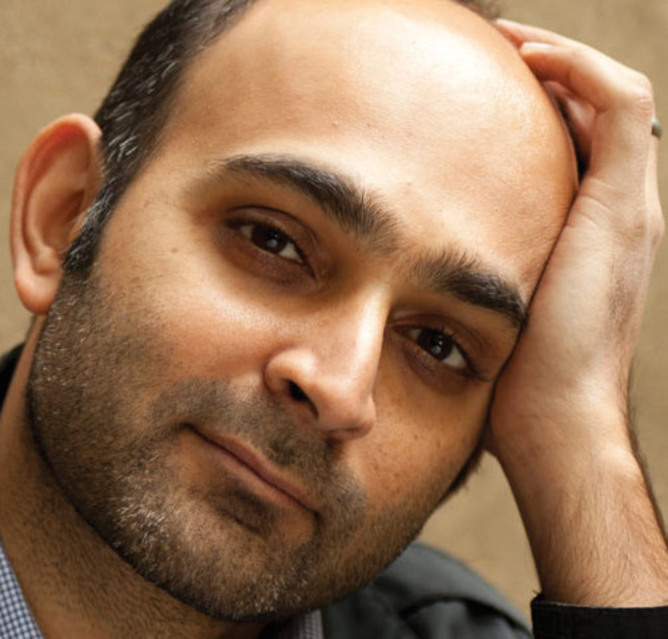 Editorial note: Good questions by Mr Aabbas Zaidi although Mohsin Hamid appears to be a typical elitist fake liberal. Particularly in regards to Deobandi violence against Shia Muslims and other communities, his answers are simplistic and naive. Ahmadi genocide and Shia persecution? He couldn’t be more wrong in his choice of words.  Moreover, he is blatantly in denial about silence or obfuscation in media and literature on Shia genocide, massacres of Sunni Sufis and Christians, target killings of Ahmadis and other groups etc at the hands of Deobandi terrorists.

His quote on “Shia persecution and Ahmadi genocide” shows his intellectual dishonesty. It is the other way around and someone who is a management consultant by profession should realise his poor and pathetic choice of phrasing situations.

Statistically and strategically, Shias are facing a genocide in Pakistan, Iraq, Syria etc. Their right to live is being challenged. On the other hand, while they are persecuted in Pakistan, they are too great a statistical number (10-20%) and too educated, patriotic and non-violent to be denied a complete share in all fields. On the other hand, Ahmadis right to practice their faith is facing greater challenges. The sheer numbers (10-20 killed per annum) does not even compare to the numbers of Shias killed (1000-2000 killed per year).

Mohsin’s “Moth Smoke” was a great novel just as “The Reluctant Fundamentalist” was a piece of shallow crap; an apologist novella for terrorism against innocents. The discussion about Jaanisaris in this novella was quite ironic given how chauvinist Pakistanis view themselves as conquerors when in reality they are mostly South Asian.

For Mohsin Hamid and other Ashrafi brand elitist liberals, Shia Muslims killed in Pakistan are a low priority in a laundry list in which murder of less than 300 Ahmadis and less than five hundred Balochs is categorized as “genocide” but the systematic massacre of more than 23,000 Shias so far is “persecution”. Also note these people’s silence on the massacre of tens of thousands of Sunni Sufis and Barelvis at the hands of their Deobandi comrades some of whom partake in their whisky and NGO funding.

Against binaries: a conversation with Mohsin Hamid

When I read Mohsin Hamid’s novel Moth Smoke (2001) over a decade ago, I thought we could be good friends. Like Hamid, I am from Lahore, and he portrayed Lahore as few have done.

Later when I read his novel The Reluctant Fundamentalist (2007) whose locale is Old Anarkali, Lahore, a neighbourhood where I grew up and spent the first 25 years of my life, the thought became a desire.

Little did I realise that one day I would be sitting with Hamid as an interviewer in Sydney. Now a novelist and social critic, Hamid is probably the most recognised literary face of not just Pakistan, but the entire Indian sub-continent. In 2013 Mira Nair’s film version of The Reluctant Fundamentalist was released and his most recent book, Discontent and Its Civilisations: Despatches from Lahore, New York & London, was published in 2014. He is in Australia as a guest of the Sydney Writers’ Festival.

Hamid is often discussed as an outsider. Born in Pakistan, he has lived almost half of his life abroad in various incarnations: student, lawyer, writer, and intellectual. This, he clarified, is not an East-West binary.

Drawing on his own experience as an outsider straddling the world where he was born and the one where he has spent years, he tells me that being an outsider has its advantages:

One cannot pretend not to be an outsider and pose as an insider to get accepted. Being an outsider has its advantages. You can recognise that everyone is an outsider for some reason.

I drew Hamid’s attention to Pakistani fiction’s failure to take up what I think is the most pressing and most confronting issue facing the country: faith-based violence.

Thousands of Muslims and non-Muslims have been killed by the terrorists of the minority Deobandi sect better known as the Taliban, Lashkar-e-Jhangvi, and Sipa-e-Sahaba. All these outfits are banned in Pakistan and abroad.

While Hamid engaged with the issue of terrorism on the international plane in The Reluctant Fundamentalist, I asked him why he and other Pakistani fiction writers have not taken up terrorism inside Pakistan? Are they constrained from doing so?

Hamid disagreed with my analysis.

No, there aren’t any factors constraining Pakistani novelists writing about terrorism. In my essay Discontent and Its Civilizations. I’ve taken a stand against the Ahmadi genocide and the Shia persecution in Pakistan. Writers like Mohammad Hanif have written about persecution of different communities … Some novelists can and will write about these issues.

Writers and their audience

Why does Hamid write in the first place? “I don’t exactly know why I write,” he began, then clarified:

When I don’t write, I start to become very agitated … a bit anxious and sometimes depressed. My wife tells me when I’ve not been writing for a while that I need to write because she says I look a bit grumpy!

Since he is a cosmopolitan writer who splits his time between Pakistan and western countries, there is another aspect to his writing. Hamid pointed it out thus:

I’m someone who feels an intense need to connect with other people because I have lived in different countries and I feel a little bit foreign wherever I am.

But he is not Hamid if his writing does not have another aspect too:

I have a bit of resistance to the way the world is and making up my own world is a response to that.

Who does he write for, I ask him. No one in particular. Hamid said his Moth Smoke may be interpreted as something written for a Lahori judge, The Reluctant Fundamentalist for an American, and How to Get Filthy Rich in the Rising Asia (2013) for someone who wants to be rich, but other than that:

I don’t have a Lahori reader or an Australian reader. To a certain extent, I write for myself in the sense that I try to write books I would like to read.

For me, something remains unresolved.

Pakistani fiction writers have eschewed writing on their country’s most relevant, pressing, and glaring issue — terrorism – at least when they are writing fiction. But when the same writers vehemently take up those issues in their non-fiction writings, it calls for some probing.

Every Pakistani grows up learning in school, home, mosque, and society in general that their country was created as an Islamic homeland. Soon after its creation, it was obvious that the dawn of freedom was, as the great poet Faiz Ahmad Faizput it, no more than a morning “drenched in blood”.

And now, when Pakistan’s English language fiction has created a great niche for itself in world literature, there is no writer to deal with terrorism. Over 100,000 Pakistani Muslims and non-Muslims have been killed by the terrorists whose theologians and religio-political leaders openly preach emancipatory eschatology which promises paradise to suicide bombers, and that those lending moral and political support to terrorism will join the bombers after dying natural deaths.

It is not that these writers are afraid of reprisals as so many tackle terrorism in their non-fiction.

Fiction requires passionate feeling about an issue, and that’s not lacking. Why, then, is terrorism in Pakistan and its devastating consequences not fit for fiction?

That’s maybe a discussion for another day.