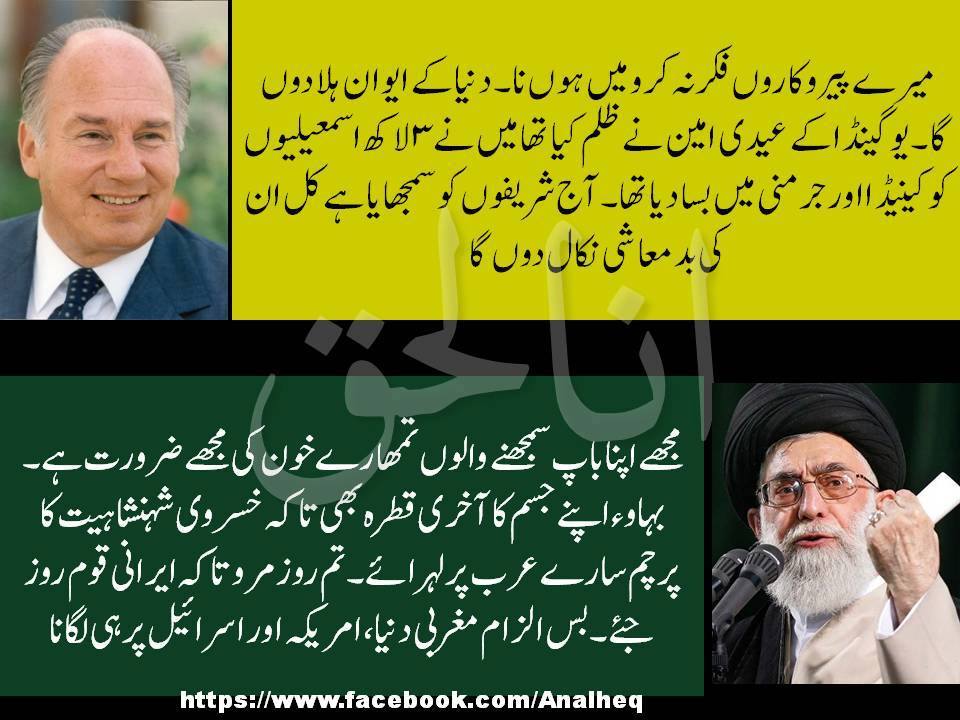 I am appalled by the anti-Iran, anti-Khamenei poster shared by this Rafidi/Mushrik/Qadiani supporter Abdul Nishapuri. The poster compares the Aga Khan’s proactive response to the Ismaili Shia massacre in Karachi with Ayatollah Khamenei’s indifference to Shia genocide in Pakistan.

I must confess that thus far I have been unable to figure out this Pakistani blogger based in Nishapur or Stockholm. Sufyani (elitist) liberals mock him as “Ayatullah Nishapuri” and think he is an Iranian stooge. Rahbari or the Vilayat-e-Faqih (VeF) type Shias think he is a Qadiani/Mossad agent.

Still, he has put us all in a pickle by this poster. I have done Google and have hardly, if ever, come across any clear statement of Rahbar Ayatullah Khamenei on the repeated Shia massacres in Pakistan – statements which if they even exist are in no way comparable to Rahbar’s statements supporting the anti-Shia elements of the Hamas and Palestinians – some of whom are Nasibi.

Instead, there are rather bizarre images of Ayatullah Khamenai kissing the Deobandi Don of Taliban, Sami ul Haq who has contributed to vicious anti-Shia fatwas in Pakistan.

For the Muawiya Marxists/Honda Civic Society/Sufyani liberals and Jamaatis like me, the easiest targets to bait and trap are Rahbari or VeF type Pakistani Shias who blindly support Ayatullah Khamenei and keep comparing him to the 12 Imams of the Shia faith.

On the other hand, those Shias who are Muqallids of nationalists like Ayatullah Sistani are a much bigger problem. Ayatullah Sistani does not like posters of himself, he requests for interfaith unity – which to be fair, is also repeatedly stated by Khamenei.

However, Shias need to re-examine the debate about VeF that took place between the mentors of Ayatullah Khamenei and Ayatullah Sistani who are Khomeini and Khoi. Ayatullah Khoie had reservations over VeF.

I apologize to all my Rahbar Shia friends. Lets get back to shooting the messenger Ayatullah Nishapuri.