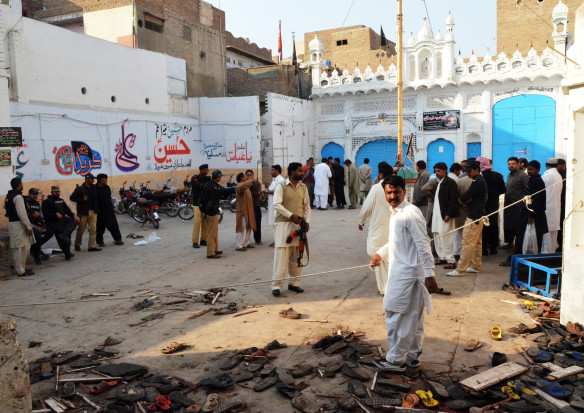 Around this time in 2011, Prince Bandar bin Sultan, the then Secretary General of the Saudi National Security Council, visited Pakistan twice. Almost immediately after those discreet visits, the Bahraini National Guard Commander and foreign minister came to Pakistan as well.

And around this time last year, Pakistan had back-to-back Saudi and Bahraini visitors, yet again. The then Crown Prince, now the Saudi king, Salman bin Abdul Aziz’s trip in February was followed up by Bahraini King Hamad bin Isa Al Khalifah’s trip in March. In 2014, as the monarchs replaced the national security leaders of 2011, it was obvious that both, the petrodollars and Islamabad’s to-do list, had been beefed up by royalty.

Continuing the trend of what seems to have become an annual springtime Saudi-Pakistan rendezvous, Nawaz Sharif was invited to Riyadh in March this year, with King Salman bin Abdul Aziz going to the airport to personally receive the Pakistani prime minister. The one-point agenda behind all these meetings was to obtain Pakistan’s military support to counter the ‘Shia threat’ in exchange for dollars. The combined reward for fighting ‘Sunni’ wars in Bahrain and Syria was US$ 2.25 billion last year.

Prime Minister Nawaz Sharif’s trip to Riyadh this year was a prelude to the ongoing Yemen crisis. The conflict is more a struggle for power than a sectarian clash, but the Shia identity of the Houthi rebels vying to dethrone the Sunni Saudi puppet, Abd Rabbuh Mansur Hadi, was enough to send the Gulf Cooperation Council (GCC) into a fit of paranoia. The US drawing closer to Iran, courtesy the nuclear deal, further fuelled the phobia.

Pakistan’s Parliament might have reached a “historic consensus” on not sending troops to Yemen, only for the prime minister to muddle it up in a shroud of ‘misinterpretation.’ But the fact that Pakistan was even considered for Operation Decisive Storm should instigate some ideological soul-searching in our neck of the woods. A look at Saudi Arabia’s coalition partners should highlight that.

In addition to the GCC, Jordan, Egypt, Sudan and Morocco are also in the coalition led by Saudi Arabia to rescue the deposed government. It’s basically a group of historically Sunni countries, with Sunni leaders who conspicuously uphold their Sunni identity, hence naturally forming an ideological alliance to counter the Schiitischer Halbmond – or the Shia Crescent. That Saudi Arabia considers Pakistan a part of this alliance contradicts the state’s raison d’etre.

Unlike the Saudi coalition countries bombing Yemen, as things stand, Pakistan should not be viewed as a Sunni country, especially when one considers that it has the second largest Shia population in the world. Not to mention the Shia political leaders that Pakistan has had, including the founding father, Muhammad Ali Jinnah. Joining Sunni alliances or acquiescing to a Sunni identity, would alienate one-fifth of the country’s population.

And yet when troops are needed to quell a Shia uprising in Manama, fight proxy wars in Damascus, or counter rebellions in Sana’a, the Arabs instinctively look to Pakistan as a natural ally. Any inkling of resistance is nullified with loose change.

All endeavours to trace Pakistan’s Sunni roots would, in all likelihood, converge on one Muhammad Zia-ul-Haq. However, to claim that Pakistan’s former president singlehandedly transformed the state and society would be very simplistic and naive. For, it does not explain why Jinnah, a Twelver Shia (the largest branch of Shia Islam whose adherents believe in the religious authority of 12 select imams) who converted from the Ismaili sect, needed two separate funerals: one according to the Sunni rituals, the other according to Shia norms. Or why the Therih massacre, that claimed the lives of 116 Shia Muslims in the Khairpur District of Sindh, took place in 1963. It does not explain why the Mughal king Aurangzeb Alamgir, and the scholar, Shah Abdur Rahim (Shah Wali Ullah’s father), do not get any flak for compiling the Fatwa-e-Alamgiri, which called for the excommunication of the Shia. Or why Mahmud Ghaznavi, the man who proudly massacred Ismaili Shia in Multan in the year 1,005 AD, is still considered a national hero.

Furthermore, let’s not forget that Zia has been dead for over a quarter of a century. Since his death, Pakistan has been governed by the current ruling party, a self-proclaimed secular liberal party and a dictator who claimed to have introduced ‘enlightened moderation.’

Zia’s seedlings were allowed to bloom in the 1990s and 2000s, when Malik Ishaq formed the Lashkar-e-Jhangvi (LeJ), and the Sipah-e-Sahaba Pakistan (SSP) evolved into Ahle Sunnat Wal Jamaat (ASWJ) following Musharraf’s ban on terrorist organisations. While ASWJ was banned in 2012, its leader Ahmad Ludhianvi contested the general elections in 2013. Meanwhile Malik Ishaq, who faces charges of terrorism and homicide,  is still playing hide-and-seek with the Lahore High Court (LHC), despite having been acquitted over 100 times.

Reports suggest that over 21,000 Shias have been killed in various attacks since Pakistan’s inception. This year alone there have been four prominent attacks on the Shia community, with imambargahs in Rawalpindi, Shikarpur and Peshawar being targeted, killing almost 100 worshippers. The relative lack of protest, despite being the almost immediate aftermath of the December 16 Peshawar attack, was reminiscent of the general reaction to the twin blasts in Quetta in early 2013 when nearly 200 Shias were killed, or the Gilgit massacre of August 2012 when 21 passengers were dragged out from a bus and massacred.

In a 2012 Pew survey of 38,000 Muslims around the world, only 50 per cent of the Pakistanis interviewed recognised the Shia as Muslims. While 50 per cent might not be an accurate depiction of the overall opinion in Pakistan, the fact that anti-Shia groups manage to garner popularity all over Pakistan, and that the likes of the ASWJ can draw thousands to their rallies in Quetta a year after the twin attack on Shias in that very city, highlights the views of a significant percentage of Sunnis in Pakistan. Not to mention that the ASWJ has, for long, been a political ally of the current ruling party, and that the SSP leaders like Azam Tariq have been elected to Parliament.

Pakistan’s metamorphosis from a hitherto Muslim nation to a Sunni country cannot be pinned on one man’s religious perversion. It is the corollary of the religious totalitarianism that has infected our politics and society collectively.

Today, when even Pakistani politicians have no choice but to pay heed to public sentiment, for Pakistan to send 2,500 troops to counter Shia uprisings in Bahrain during the Arab Spring’s initial phase in 2011 highlights the lack of mass discontent vis-à-vis sectarian alliances. That it was the secular and liberal PPP – the self-proclaimed antithesis to Zia, with Shia leaders at the helm – under whose rule the decision was taken, showcases how sectarianism and cognitive dissonance is gradually being etched in our political ethos.