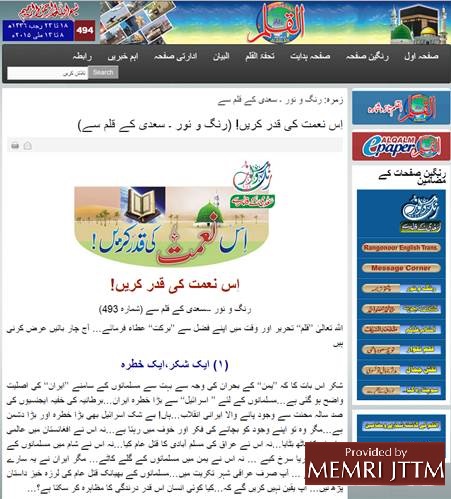 In a recent article, the Urdu-language Pakistani weekly Haftroza Al-Qalam called Iran a bigger threat to the Muslim world than Israel. In the article, the weekly, which is published by the leading Pakistani military-supported jihadi organization Jaish-e-Muhammad (JeM), argued that the Yemen crisis has exposed Iran’s reality to many Muslims and accused Iran of spreading its tentacles across the entire Middle East.

Print copies of Haftroza Al-Qalam are widely available in Pakistani cities. The JeM, which publishes the magazine under its charity arm Al-Rehmat Trust, is headed by Maulana Masood Azhar, one of the three militants released by India in exchange for the passengers of an Indian plane hijacked from Kathmandu to Kandahar via India in 1999. At that time, Afghanistan was ruled by the Taliban. Maulana Masood Azhar had been in arrested by Indian security forces and imprisoned in Kashmir.

The article is actually a column called “From the pen of Saadi,” which is believed to be authored by Maulana Masood Azhar. The article goes on to say that an effort is underway to make the Koranic verses regarding jihad redundant. He draws parallels between what he calls the present-day “mischief” and the “mischief” in early Islam when Islamic scholars clashed on the concept of whether the Koran was “given” by Allah or “created” by humans.

Following are excerpts from the Haftroza Al-Qalam article:

“Yes, Muslims! Iran Is A Danger; Only Iran Is The Protector Of Israel And Of All The Infidels In This Region [Of The Middle East]”

“[I am] grateful for the fact that because of the crisis in Yemen, Iran’s reality has been exposed to a lot of Muslims. Iran is a greater danger for Muslims than Israel. British intelligence agencies’ hundred-year effort created the Iranian Revolution. Yes, no doubt, Israel too is a big threat and a big enemy, but it lives in fear and worry to save its existence.

“It [Israel] has not helped international imperialists in Afghanistan; neither has it massacred the Muslim population in Iraq, nor it has bloodied rivers with Muslims’ blood in Syria; it did not cut the throats of Muslims in Yemen. But Iran has done all of these. You just read the moving story of the horrible massacre of Muslims in the Iraqi city of Tikrit [by a pro-Iran militia]. You would not believe that man can resort to such cruelty.

“The West itself concocted and spread stories about Daulat-e-Islamia’s [ISIS] cruelty, but the international media has not spared two minutes, or two lines, in reporting how in Tikrit the Iranian Pasban [militia] put Genghis Khan and Halaku Khan [the 13th century Mongol invaders] to shame. This is because Iran is, at this time, the ‘darling’ of the infidels.

“Even the blind know about BBC London – that it is an effective anti-Islam organization operated with Jewish money. The BBC likes neither maulvis [clerics] nor Islamic governments, but it has a different criterion for Iran – their clerics are acceptable; their hardline government [in Tehran] is acceptable; their aggressive punishments [violating human rights] are tolerated; and now it [Iran] is open-heartedly supported [by BBC-like Western institutions] in the Yemen crisis.

“Yes, the ground is being prepared for Dajjal [the Anti-Christ; here referring to Iran]… And now this monster’s [Iran’s] tentacles have spread from Tehran to Beirut. But [its] dreams beyond [Beirut] are a bit sour. After Yemen, there definitely is Saudi [Arabia] but Mecca and Medina are very closely guarded. The Dajjal cannot enter there.

“Yes, Muslims! Iran is a danger. Only Iran is the protector of Israel and all the infidels in this region. But thankfully, this enemy behind Taqqiya [a reference to the Islamic concept of mendacity about religion for self-protection] is exposed. Should it take steps towards the Holy Places [of Mecca and Medina] or Pakistan, it will be dishonored, Allah willing.”

“One Great Remedy For The Wrath Of Allah Told About In The Koran: Jihad In The Path Of Allah; Go Out To Wage Jihad [To] Avoid Punishment; Wherever [You] Find Fronts Of Shari’i Jihad, Go There ”

“If you have studied the history of the Planet Earth, you will know that sometimes attacks of earthquakes, storms, and Satans increase on Earth. That is the situation today. The world’s highest peak, Everest, has been shaken by an earthquake, and the earth has shaken within across thousands of miles. Nepal has broken down; the skies are thundering everywhere and casting down water and lightning on the Earth. This is the time to say prayers for protection from Allah’s wrath…”

“One great remedy for the wrath of Allah told about in the Koran is: jihad in the path of Allah. Go out to wage jihad, [to] avoid punishment. Wherever [you] find fronts of Shari’i [Shariah-based] jihad, go there, punishments will move from your path. Put your life in jihad, spend your money in jihad, use your tongue in jihad, [for] war, training, funerals, support… then [you will] see Allah’s victory and mercy.

“The second remedy to avoid Allah’s wrath is [to seek Allah’s] forgiveness. For a Muslim, there is no escape from forgiveness. Forgiveness is the protection of Ummah [the global Muslim nation] and the protector of faith. For those who have heart, the month of Rajab [the seventh month of the Islamic calendar] is more beneficial for [seeking] forgiveness. [It] will purify [you] of sin, and, Allah willing, every problem will be solved. And [it] will protect from wrath. Seek forgiveness to avoid earthquakes, storms, and Satan. Seek mercy from your beloved Allah… [When you genuinely] seek forgiveness [from Allah], a single teardrop… is so powerful that it extinguishes fire of hell; the storms of this world have no meaning before the fire of hell… Whenever rain or storm arrive, vow to wage jihad, spend money on jihad, busy yourself in forgiveness and prayer…”

“Today Every TV Channel [In Pakistan And Elsewhere] Spits Venom Against These [Koranic] Verses [On Jihad]; Today Every Westernized Columnist Pens Denial Of The Meaning And Objective Of These Verses”

“Yesterday I spent some time with the 10th volume of the authentic book of history Al-Bidayah Wal Nihayah. This comprehensive book is by [14th century Sunni scholar] Ibn Kathir Al-Damishqi. It is considered very respectable among the learned. It begins talking about the highly regarded Imam of the Muslim Ummah, [ninth-century Muslim scholar] Hazrat Ahmed Ibn Hanbal. After writing of his virtues… Ibn Kathir mentions his dreams about Imam Sahib. He first presented the evidence that true dreams are reliable and that for a pious person they are sources of knowledge and guidance…”

“In the times of Imam Sahib [Ibn Hanbal], a mischief surfaced, and the rulers of the time were protectors of that mischief. The mischief, against the Koran, [maintained] that, Allah forbid, the Koran is a ‘creation.’ Imam Sahib took a stand against that. He was beaten, imprisoned; restrictions were imposed… but he remained steadfast. At last, his determination broke the back of this mischief. First it became weak, and then, with the help of Allah, it died out completely…”

“In our times, there is a mischief that is rife, that rejects the Koran’s verses regarding jihad. This mischief is protected by rulers. This mischief is also considered scholarship of the times, as the mischief regarding the Koran being a creation [was during the times of Imam Hanbal]. Different classes [of society] are the flag-bearers of this mischief. Some openly reject [these jihadi verses] and some are arriving at rejecting them through tempering/reinterpretation. But for all of them, the objective and conclusion is the same: that these verses, Allah forbid, should be used only for recitation today, and [some argue that] Muslims should abandon the concept of acting upon these verses [about the need for waging jihad]…”

“In such circumstances, some lovers [of jihad] will come to your door to [invite you]: Oh Muslims, come for seven days and study the commentary of the Koran’s verses on jihad [at week-long courses held by Jaish-e-Muhammad in towns across Pakistan]; come and study the commentary of these verses whose commentary is being destroyed… [by those who argue against jihad]; come and play your part in the service of Allah’s book; come and play your part in the protection of Allah’s book. Allah has promised to protect his book…”

“[At these week-long courses,] come and meet the martyrs of the battles of Badr and Uhud [early Islamic battles], in the shadow of these verses. Come and meet [i.e. understand the role of] our beloved Prophet [Muhammad] as military commander, in light of these verses. Come and find the path of honor, greatness, freedom and martyrdom through these verses and declare: Oh Allah, we believe in your book, and we obey its every verse.

“Glorious is Allah, service of the Koran, protection of the Koran, and the invitation of the Koran’s meetings are about to take place [i.e. the week-long courses]. Brothers, work for these meetings, participate in them, and expand the aura of its glow. Yes, I say the truth: value its blessings.”
Source: Haftroza Al-Qalam (Pakistan), May 1-7, 2015. Edition 493.