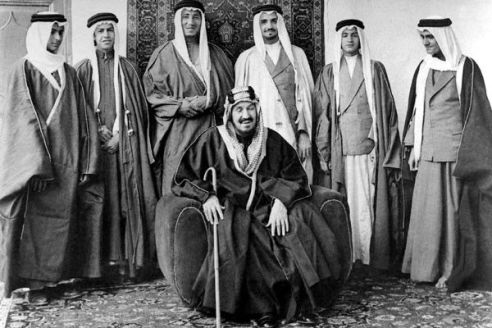 Remembering the Wahhabi forces has always been associated with remembering the criminal practices of their ancestors since the political deal between Mohammad bin Saud and Mohammad bin Abdul Wahhab, which stated that the first must protect the ideology of the second in order for it to spread, while the second gives legitimacy to the rule of the first. This political deal is still in practice until today, Al Saud is leading the political scene in the kingdom while the religious leadership is under the control of Mohammad Bin Abdul Wahhab’s sons.

In April, 1802, Saud bin Mohammad’s (grandfather of Abdul Aziz) Army invaded Karbala  and slaughtered 4,000 Muslim Shiites, despoiling the holy shrines, “including that of Martyr Hussein, grandson of Prophet Mohammad (pbuh). After despoiling the city, the Wahhabis left, taking with them precious spoils which included swords inlaid with jewels, guns, golden jewelry and Persian carpets, which they carried on the backs of 4,000 camels,” according to American author Dore Gold.

In parallel, Catalan orientalist known as “Ali Bey Al-Abbasi” records that the invaders of Karbala had passed the swords on the necks of men and young boys of all ages.

Dore Gold quotes another Western source as saying that they ripped up the stomachs of pregnant women and left the embryos over the bodies of their mothers, “for their savageness did not quench their thirst, so they did not stop murdering.”

In the next year, Holy Mecca fell in the hands of the Wahhabi Army under the leadership of Saud bin Mohammad who demanded “the razing of all the mosques and hermitages dedicated for the revival of the prophet and Ahlul Beit”.

They razed “the hermitages of the companions… the army razed the hermitage in Al-Nour Mount where Gabriel sent down the revelation to Prophet Mohammad (pbuh). Moreover, the Wahhabis appointed a guard on the mountain to prevent pilgrims from praying on its top. It was a prayer which pilgrims performed in the spot where Prophet Mohammad (pbuh) used to meditate and worship God.”

The author documents what took place in Taef later on, when the Wahhabis “passed their swords on everyone they met, without separating between men, women, or children, and did not hesitate to tear up the innocent people into pieces while they were in their beds and homes.”

Gold adds that: “In Medina, the Wahhabis applied their religious ideology which demanded razing tombs. They tried to raze the fancy domes over the tomb of the prophet, and the Wahhabi invaders took away all the precious items in the tomb and despoiled the treasure of the prophet’s mosque.

This is what the grandson of the establisher of the third Saudi state – Abdul Aziz bin Abdul Rahman Al Saud, known as Ibn Saud – did. So, what did history record about practices throughout his rule?

Eldon Ratter, an English who converted to Islam, narrates the changes he had witnessed after the Wahhabis came. On that day, Ratter visited “the birthplace of Prophet Mohammad (pbuh), and it was a spot in the pious shrines, like a small mosque with a dome and a small hermitage.”

When he mentions the changes, he says: “The Wahhabis have destroyed the dome of this structure and its hermitage, and they removed the curtains and other decorations… Today, every time the prophet’s birthday is mentioned among people of Mecca, their faces turn gloomy and they begin cursing the people of Najd (because Al Saud are from Najd).

Wahhabi fighters’ practices built fear among people from the control of Ibn Saud over the holy cities of Muslims. Back then, India, which used to be the largest Islamic country, demanded internationalizing Hijaz, specifically its holy cities, according to Dore Gold’s book “Hatred’s Kingdom, How Saudi Arabia Supports the New Global Terrorism”.

The concern in the Islamic world emerged after Muslims halted traveling to perform pilgrimage out of fear of being offended by the Wahhabis, since the latter believe that they get closer to Allah by killing Muslims who disagree with them.

In 1926, and four years before taking over Al-Azhar Sheikhdom,  Sheikh Mohammad Al-Ahmadi Al-Zawahiri headed the Egyptian delegation to the World Muslim Congress which Abdul Aziz called for, and gave confidence to Muslims just for the sake of maintaining his position in Mecca. Sheikh Al-Zawahiri says that the delegates who attended Mecca congress: “Were all against the government of Ibn Saud and the Wahhabis in Hijaz, and even the minority who supported Wahhabism, when they arrived to Mecca and witnessed the changes, they were disappointed… in reference to the razing of the companions’ tombs and the holy city’s features.

What did Zawahiri see in Mecca?

“It was prohibited to begin the prayers with the term “Prophet of Allah”, because this was considered (by Wahhabis) polytheism, and Allah should be the only one addressed during prayers. So in Mecca’s largest mosque, Zawahiri saw Wahhabis reprehending an Egyptian man and asking him: “Did you use O ‘Prophet of Allah’ in your prayer?” But out of fear, the Egyptian man denied it.

Zawahiri tried to pacify the scared Egyptian man that day and told him: “To be honest with you, I also begin my prayers with ‘O Prophet of Allah’.” In other words, the man, who later became one of the most significant religious figures in Egypt and the Islamic world, was also scared to pray freely in Mecca like any devout Muslim!