Home  »  Newspaper Articles   »   The only way of dealing with Isis, al-Qaeda and other jihadi movements is in the countries where Salafis and Deobandis flourish, i.e. Saudi Arabia, Pakistan and Afghanistan – Patrick Cockburn 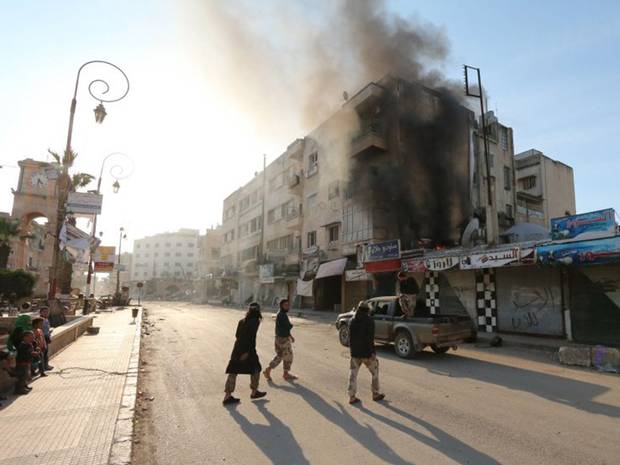 The ghost of Osama bin Laden will have been chuckling this month as he watches the movements he inspired conquer swathes of the Middle East. He will be particularly gratified to see fighters from Al-Qaeda in the Arabian Peninsula (AQAP) storm into Al Mukalla, the capital of Yemen’s eastern province of Hadhramaut from which the bin Laden family originated before making their fortune in Saudi Arabia.

As happened in Mosul, Iraq last summer when the Iraqi army fled before a jihadi attack, Yemeni government soldiers abandoned their bases in Al Mukalla leaving US Humvees and other military equipment. Earlier, AQAP had seized the central prison in the city and freed 300 prisoners, including Khaled Batarfi, one of the most important jihadi leaders in Yemen.

It is a measure of the severity of the multiple crises engulfing the region that AQAP, previously said by the United States to be the most dangerous branch of al-Qaeda, can capture a provincial capital without attracting more than cursory attention in the outside world. How different it was on 2 May 2011 when President Obama and much of his administration had themselves pictured watching the helicopter raid on Abbottabad, Pakistan where bin Laden was killed. The grandstanding gave the impression that his death meant that the perpetrators of 9/11 had finally been defeated.

But look at the map today as unitary Muslim states dissolve or weaken from the north-west frontier of Pakistan to the north-east corner of Nigeria. The beneficiaries are al-Qaeda or al-Qaeda inspired groups which are growing in power and influence. The US and its allies recognise this, but cannot work out how to prevent it.

You can say that again. Mr Carter sounded a little put out that “terrorists” have not chosen well-ordered countries such as Denmark or Canada in which to base themselves, and are instead operating in anarchic places like Yemen, Iraq, Syria, Libya and Somalia, where there is no government to stop them. Suddenly, the drone war supposedly targeting leaders and supporters of al-Qaeda in Yemen, Pakistan and Somalia is exposed as the politically convenient irrelevance it always was. In fact, it was worse than an irrelevance, because the use of drones, and periodic announcements about the great success they were having, masked America’s failure to develop an effective policy for destroying al-Qaeda in the years since 9/11.

Al Mukalla was not the only victory of an al-Qaeda affiliate in recent weeks. In northern Syria, al-Qaeda’s Syrian affiliate, Jabhat al-Nusra, led an attack force of between 4,000 and 5,000 jihadis to capture the provincial capital of Idlib whose Syrian army garrison was overwhelmed. Saudi sources revealed that Saudi Arabia and Turkey had both given their backing to Jabhat al-Nusra and other extreme jihadis in seizing Idlib.

Saudi Arabia and other Sunni states seem intent on rebranding Jabhat al-Nusra and its clones as wholly different from Islamic State (Isis) and therefore acceptable as a potential ally. Al-Nusra may not publicly revel in its own atrocities as does Isis, but otherwise it differs little from it in ideology and tactics. Created by Isis in 2012, it split from the parent movement and fought a bloody inter-rebel civil war against it in early 2014, but today there are worrying signs of cooperation. According to accounts from the Syrian opposition, it was al-Nusra that allowed Isis fighters to take over in recent days most of Yarmouk Palestinian camp a few miles from the centre of Damascus.

For all the billions of dollars spent on security since 9/11, the tedious searches at airports, the restrictions on civil liberties, tolerance of torture – not to mention the wars in Iraq and Afghanistan – the so-called “war on terror” is being very publicly lost. The heirs of 9/11 are far stronger than ever. As argued previously in this column, there are seven wars going on in Muslim countries between Pakistan and Nigeria and in all of them al-Qaeda-type movements are gaining in strength or are already strong. It would be astonishing if these conflicts did not at some point produce extreme violence in nearby countries such as the massacre of Christian students by Somali gunmen in Kenya or the killing of Charlie Hebdo cartoonists, police and Jewish shoppers in Paris. Given that there are 2.8 million Muslims in Britain, 4.1 million in Germany and 5 million in France, al-Qaeda-type movements are bound to find some supporters.

What should be done? The only way of dealing with Isis, al-Qaeda and other jihadi movements is in the countries where they flourish. The great mistake after 9/11 was for Washington to absolve Saudi Arabia of responsibility – though 15 of the 19 hijackers, bin Laden himself, and much of the money spent on the operation came from Saudi Arabia – as well as Pakistan, which had propelled bin Laden’s hosts, the Taliban, into power in Afghanistan.

Once again al-Qaeda-type movements are not being targeted effectively despite their many enemies. This failure can best be explained by a saying popular a few months ago among western politicians and diplomats to explain their policy in Syria and Iraq. This was “the enemy of my enemy is not necessarily my friend”.

Few of those who pronounced these glib but shallow words had thought them through or appreciated that, if this was indeed the policy of the US, Britain and their allies, then there is no way the Isis, Jabhat al-Nusra or AQAP can be defeated. In Yemen, the Houthis are the strongest military force opposing AQAP, but since we support Saudi Arabia in its air campaign against the Houthis we are ensuring a situation in which AQAP will be able to expand. Since the Saudis’ stated aim is to restore to power President Abd-Rabbu Hadi, who has almost no support (those described as his supporters are mostly southern secessionists), the chief beneficiary of prolonged war will be AQAP.

In Syria, similarly, “the enemy of our enemy” and the strongest military force is the Syrian army, though it shows signs of weakening after four years of war. But if we have decided that US air power is not to be used against Isis or Jabhat al-Nusra when they are fighting the Syrian army because we want to get rid of President Bashar al-Assad, then this is a decision that benefits Isis, Jabhat al-Nusra and extreme jihadis. In Iraq the situation is less dire because, although there is a pretence of not cooperating with the Shia militias, in practice the US had been launching air strikes on the same Isis positions these militia are attacking on the ground. The reality is that it is only by supporting “the enemy of my enemy” that the expansion of al-Qaeda and its lookalikes can be beaten back and the movement defeated.