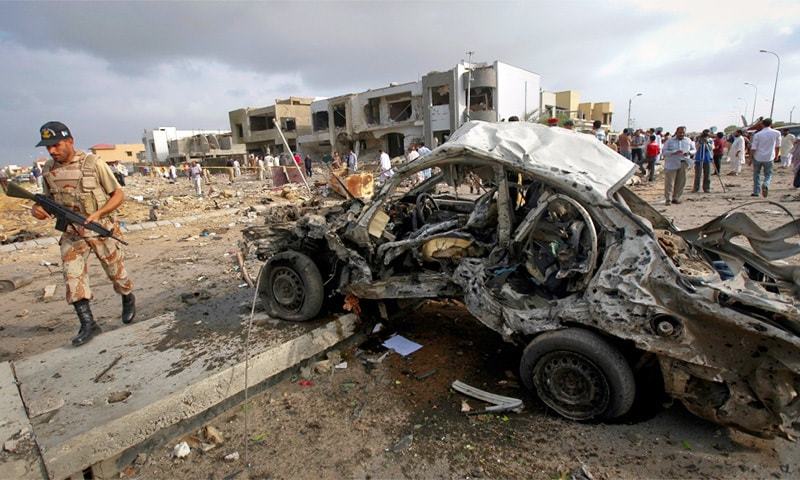 If incompetence and corruption of the ruling elite were not enough to derail the economy, Pakistan’s sustained bout with terrorism did the rest.

Recent research shows that in the absence of terrorist violence, Pakistan’s economy would have grown much faster than it actually did.

A paper by Sultan Mehmood in Defence and Peace Economics tabulated the impact of terrorism on Pakistan’s economy. The author estimated Pakistan’s real (inflation adjusted) GDP per capita would have grown by 177 per cent during 1973 and 2008 (instead of 119 per cent) in the absence of terrorist violence. Thus, the cumulative economic loss due to terrorism is around 33 per cent.

Over the years, several agencies, including the IMF and the government of Pakistan, have tried to guess terrorism’s devastating impact on Pakistan’s economy. A systematic estimate of the impact, however, had been lacking till now.

Given the fact that the terrorist violence in Pakistan and Afghanistan has intensified in reaction to Nato’s engagement in the region, Pakistan possesses few, if any, unilateral options to break this cycle of violence. As long as external triggers persist, local and foreign militants are likely to continue committing terrorist acts against the State and the society.

Even if and when the external stimuli for terrorist violence disappear, it is highly unlikely that Pakistan will be free of terrorism.

The domestic triggers of terrorism, i.e., the sectarian and communal conflicts in urban Pakistan, are likely to continue causing terrorism-related economic losses over the long run.

Given the huge post 9/11 terrorism-driven economic losses, the international community bears some responsibility to help buttress Pakistan’s economy against these systematic losses.

This is not an argument to extend handouts to Pakistan’s civil and military establishment. Such partially documented, and at times unaudited, haphazard support has failed to strengthen the economic base because the funds often disappear in the thick fog of creative accounting. Realising the widespread corruption, USAID routinely seeks the public’s support in identifying misappropriation in their sponsored projects in Pakistan.

What instead is needed is a direct support to the private sector to help develop and strengthen the market economy in Pakistan.

This may include, among others, the support to strengthen property and intellectual rights, training of trades, and priority access to European and North American markets for goods and services produced in Pakistan.

Sultan Mehmood further demonstrates that the impact of terrorist violence persists for at least two years after the incidents. The impact on workers’ remittances is felt for even longer periods. This implies that even (if) when the terrorist violence will subside in Pakistan, its adverse impacts are likely to linger on for a few more years.

Often, the international forces have followed a cut-and-run approach in the region.

Take Canada for example, which deployed almost three thousand troops in Kandahar. As soon as the Canadian troops pulled out of Afghanistan, without making any meaningful progress in security or development, Afghanistan disappeared from Canada’s national discourse and the focus shifted to new conflicts and regions. Today, Canada’s news media and the government are focused on targeting IS in Syria. Afghanistan seems a distant memory.

Knowing that the adverse impacts of their policies and interventions will be felt later for years, the global powers must commit to a long-term support structure to develop markets and strengthen civil society after their armies have pulled out of the region. The cut-and-run approach gave birth to al Qaeda and the Taliban. A sustained and considerate engagement could have avoided the past 14 years of catastrophic violence.

Pakistan today, as it has been for the past three decades, is at the brink of an economic and social collapse. Its economy has been kept on life support by the lenders of last resort. The IMF alone had to step in at least 12 times during 1990 and 2007 to prevent Pakistan from defaulting. Bilateral handouts by friendly and not-so-friendly states account for billions more in charity. Even more sums were borrowed from multilateral institutions.

Still, the economy failed to improve.

The sheer incompetence and ignorance of the political leadership and civil bureaucracy continues to create economic crises of unprecedented proportions. Even when the masses demonstrate robust willingness to pay for goods and services, e.g., petrol and electricity, the State seems incapable of delivering.

The international community must realise, as have the people of Pakistan, that the Pakistani State is unlikely to cope with the grave challenges faced by the masses who have paid the ultimate price for the State’s mismanagement and the terrorist violence.

If there is a willingness to help the people of Pakistan for the economic losses they have suffered because of terrorism, the international community may want to bypass Pakistan’s obtrusive State and directly assist the private sector and the civil society in building pathways to market-based economic prosperity that is safeguarded by an alert and vibrant civil society.

One response to “33% stronger: A Pakistan without terrorism – Murtaza Haider”