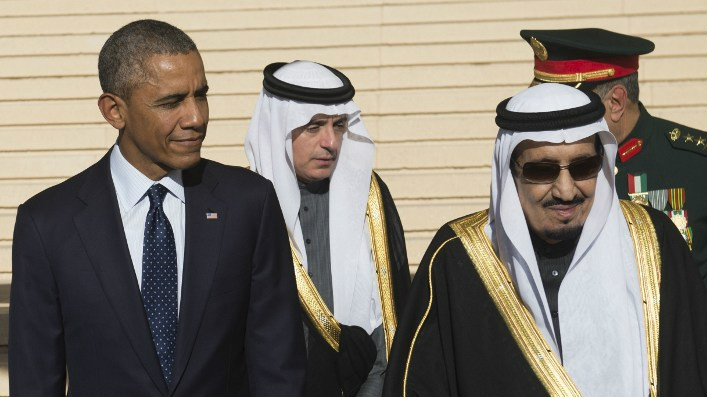 Saudi Arabia has jumped into the abyss.

Its air attacks on Yemen are a historic and potentially fatal blow to the Kingdom and to the Middle East.

Who decided that this extraordinary battle should take shape in the poorest of Arab nations? The Saudis, whose King is widely rumoured in the Arab world to be incapable of taking decisions of state? Or the princes within the Saudi army who fear that their own security forces may not be loyal to the monarchy?

The “story” of Yemen appears simple. Houthi rebels, who are Shia Zaydi Muslims but are closer in beliefs to Hanafi Sunnis than Twelver Shias, have captured the capital of Sanaa with the help – so say the Saudis – of the Iranians. Along with Sunni Sufis, Zaydi Houthis have been most successful that has strated eliminating Al-Qaeda (Wahhabi terrorists) from Yemen. The insignificant President – Abed Rabou Mansour Hadi – has fled to the Saudi capital of Riyadh from his bolthole in the old southern Yemeni capital of Aden. The Saudis will not permit an Iranian proxy state to be set up on their border – always forgetting that they already have an Iranian-proxy state called Iraq on their northern border, courtesy of the 2003 Anglo-American invasion of Iraq. The real “story” is more important. Perhaps half of the Saudi army is of Yemeni tribal origin. Saudi soldiers are intimately – through their own families – involved in Yemen, and the Yemen revolution is a stab in the guts of the Saudi royal family. No wonder King Salman of Saudi Arabia – if he indeed rules his nation – wishes to bring this crisis to an end. But are his bombing raids on Sanaa going to crush a Shia Muslim rebellion?

You can understand what it looks like from Riyadh. To the north, the Shia Muslim Iranian Revolutionary Guards are assisting the Shia-dominated Iraqi government in their battle against Sunni, in fact Salafi Wahabi and Deobandi, Muslim Isis. To the north-west, the Iranian Revolutionary Guards are assisting the government of Alawite (for which read, Shia) president Bashar al-Assad against Isis and al-Nusrah and whatever is left of the so-called “Free Syrian Army”. The Shia Hezbollah from Lebanon are fighting alongside Assad’s army. So are Shia Muslims from Afghanistan, wearing Syrian uniforms. Saudi Arabia claims the Iranians are in Yemen with the Houthis. Unlikely. But be sure their weapons are in Yemen.

Unprecedented in modern Arab history, a Sunni and Salafi Wahhabi Muslim coalition of 10 nations – including non-Arab Pakistan – has attacked another Arab nation. The Sunnis and the Shia of the Middle East are now at war with each other in Iraq, in Syria and Yemen. This is notwithstanding the fact that Salafis/Wahhabis and Deobandis of ISIS, Taliban, Al-Nusra and ASWJ-LeJ have killed more Sunnis and Sufis than the number of Shias and Christians massacred by them. Pakistan is a nuclear power. The armies of Bahrain and the Gulf states include Pakistani soldiers. Pakistanis were among the dead in the first great battle against Iraqi troops in the 1991 Gulf War.

But already, the battle for Yemen is dividing other Arab countries. In Lebanon, the former Sunni Muslim Prime Minister Saad Hariri has praised the “brave and wise” decision of King Salman to attack. Mr Hariri is not only a Sunni – he is also a Saudi citizen. But the Shia Hezbollah, who oppose Saudi intervention, called the Saudi assault an “uncalculated adventure”. These words were chosen with care. They are exactly the words the Saudis used against Hezbollah after it captured three Israeli soldiers in 2006, a stupid political act which started the Israeli bombardment of Lebanon that year.

The Americans do not know what to do. They cannot give the Saudis direct military assistance – their nuclear talks with Iran are more important – and so their soft verbal support for King Salman is supposed to mollify their Sunni allies and avoid antagonising the Iranians. But the closer a nuclear deal comes between the US and Iran, the more forcefully their partners in the Arab world will push their cards. What provoked the Saudis into their extraordinary adventure in Yemen was not the approach of Houthis towards Aden but the approach of US-Iranian agreement at Lausanne.

Hezbollah may call the Saudi attacks a “Saudi-American conspiracy” – an overused phrase which contains some truth – but the reality, evident to every Arab, is that the Saudis, armed (or over-armed, as many might say) by the US, are clearly prepared to use their firepower against another Arab nation rather than the traditional enemy further north. Listening to the rhetoric of the Saudis, you might think that they were bombing Israel.

History may say that the attacks on Yemen are the start of a great civil war between Sunnis and Shia in the Middle East. This simplistic Sunni-Shia binary would satisfy the West – and Israel – in a belief that the Arabs are at war with themselves. But Houthis are Zaydi Shias who are closer to Hanafi Sunnis than they are to Twelver Shias. They are fighting Al-Qaeda and other Wahhabi extremists, many of whom have roots in Saudi Salafist ideology. It may also be true that this is the last attempt by the Saudis to prove that they are a major military power. In 1990, faced with the arrival of Saddam’s legions in Kuwait, they asked infidel America to protect them (to the fury of Osama bin Laden). They are a Wahabi nation, loyal – officially, at least – to the same theology as the Taliban and Isis. Saudi provided 15 of the 19 hijackers of 9/11. They gave us Bin Laden, who – let us not forget – was also of Yemeni tribal origin. After Yemen supported Saddam’s invasion of Kuwait, the Saudis threw tens of thousands of Yemenis out of the Kingdom. In revenge for their disloyalty. Do they expect Yemenis now to rally to their support?

The last time the Saudis involved themselves in Yemen, they fought Nasser’s Egyptian army. It was a disaster. Now they have the Egyptians on their side. Indeed, they even suggest the Egyptians may stage a landing in Yemen. But to do what? To ensure that Yemen remains a faithful Sunni nation? Will this assuage the Sunni (Salafi/Wahhabis) militias battering the Egyptian army in Sinai?

More seriously, will it resolve the coming struggle within the royal family, whose princes do not all believe Yemen must be the cornerstone of Saudi power – nor that Wahabism must be the permanent sectional belief. And who gains from the new Yemen crisis – other than Israel and the weapons-producing countries? The oil producers, of course. And that means Saudi Arabia – and Iran.

Source: Adapted from The Independent