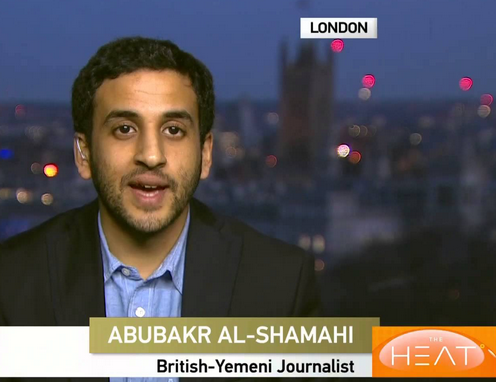 About the author: Abubakr Al-Shamahi is a British–Yemeni freelance journalist. He holds an MA in Near and Middle Eastern Studies from SOAS, University of London. Abubakr tweets at @abubakrabdullah. His blog can be found at www.alshamahi.com. The following article, cross-posted from Yemen Times, has been lightly edited and adapted in view of recent developments. Additional information has been provided by Sarah Khan. 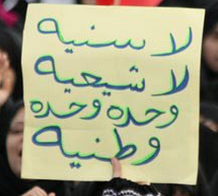 Yemen is more nuanced than Sunni and Shia

Religion, just like most things in Yemen, is often confusing to the outside observer.

Those with a passing interest in the Middle East will generally know of the main schism in Islam, that between Shias and Sunnis. The conflicts we see in the Middle East today, whether they be in Syria, Iraq, Bahrain or Lebanon, are often largely framed in the manner of disputes between adherents of Shiism and Sunnism. Sometimes, it is even portrayed as the continuation of a 1400 year old ‘war for Islam’, which is useful for anyone trying to whitewash the role of colonialism and little things like the Iraq War—they’d have been killing each other anyway!

Enter Yemen. In the north of the country, a group known as the Houthis, but also now known as Ansar Allah, variously described as ‘Zaydi Revivalists’, ‘Shia militants’ and ‘pro-Iranian fighters’, have been fighting with what seems like just about everyone over the last ten years. They’ve taken on the Yemeni state in 6 wars starting in 2004, fought Yemeni and foreign Salafis (or Wahhabis), skirmished with the Saudi army, and most recently battled with the al-Ahmars, the leaders of Yemen’s most powerful tribal confederation, Hashid.

Kudos to them, they’ve performed relatively successfully, and now sit in an enviable position, largely controlling the areas lying between the Yemeni capital Sana’a and the Saudi border.

Who are they? Well, calling them ‘Shia’, ‘Zaydi’ and ‘pro-Iranian’ always lack nuance, and some understanding of the Yemeni situation. The Sunni-Shia or Saudi-Iran binary lacks nuance and also helps the Saudi media to implement its specific Salafist and regional agenda by portraying Houthis as Shias or Iranian proxies. It must be born in mind that from a Saudi Salafi perspective all Shias despite their Arab origins are stereotyped as Iranian or Persian proxies.

So Yemen’s religious make-up. The two main ‘religious groups’ to start with here are Zaydis and Shafi’is.

Shafi’ism (Shafi’iyyah) is a school of thought within Sunni Islam. It is named after Imam al-Shafi’i, and is one of the four main schools of thought in Sunni Islam. Shafi’is are found across the Muslim world, such as Egypt, Syria, Indonesia and Somalia. In Yemen, Shafi’is predominate in all the areas not mentioned as being ‘traditionally’ Zaydi, and they are the majority particularly in the Soutern part of Yemen. However, some have old grievances regarding the way that the ruling class of northern Yemen during the Imamate was Zaydi.

Now, the important thing to note here, and this might sound suspicious to people looking at the rest of the Middle East, Zaydis and Shafi’is have traditionally gotten along just fine. For example, although a mosque may be affiliated to one group or the other, no one will bat an eyelid if a person from another sect comes in to pray, and people pray together. The only difference you’ll notice is that some people pray with their hands to the sides (Zaydis) and others with their hands folded (Shafi’is). An example—my local mosque’s Friday sermon is delivered by an Egyptian sheikh from al-Azhar (a Sunni), the Zaydi call to prayer is given, the Imam leading the prayer is Zaydi, and the congregation is evenly split. My own family are split between Zaydis and Shafi’is, and those that prefer to call themselves just Muslim and leave the details to one side. And all was good…

Well, until politics got involved.

What we’re seeing in northern Yemen today, in terms of fighting between the Houthis on one side, and various armed groups on the other, definitely does have an element of the sectarianism that can be seen across the wider region. However, it’s a lot more confusing. For one, it’s wrong to simply say that Houthis = Zaydis, and, say, Al-Ahmar = Shafi’is. Or even worse, Houthis = Shias, and al-Ahmar = Sunnis. For one, the al-Ahmars are traditionally Zaydi, just like the Houthis. I can’t vouch for the religious identification of each individual Ahmar, but I’d say that many of their tribal fighters will still, at least loosely, identify as Zaydi. Ali Abdullah Saleh, who fought 6 wars against the Houthis, was also Zaydi. So is this Zaydi on Zaydi fighting? A Zaydi civil war?

Well, no. To put it very simply, you can say that the religious element behind the Houthis, i.e., Zaydism, is revived by decaded of oppression by the Yemeni government on one side and the onslaught of Saudi-backed Salafi evangelists and Al-Qaeda on the other. There is a feeling that their rights a equal citizen of the state have been violated not only in socio-economic and political terms but also there is a sense of ideological suppression. I was told by a Houthi that I met in Sa’dah that “the Zaydis in Sana’a have forgotten how to be Zaydi.” Many Houthis believe that they are reviving Zaydi traditions and beliefs, that have been suppressed in the years following the 1962 revolution (despite all presidents of North Yemen in that period having been Zaydi). They see people like Saleh and the al-Ahmars as Zaydi in name only.

On the other side, the al-Ahmars, and Saleh in the past, have accused the Houthis of secretly not being Zaydi anymore, and instead being Twelver Shias (a la Iran). This then easily feeds into the wider paranoia, and the Saudi-GCC discourse, which is also conveniently parroted in the Western media, about the spread of Shi’ism and Iranian power in the region. Although there are Twelvers who are Houthis, and some of them are newly ‘converted’, the vast majority of Houthis would still self-identify as Zaydi.

To further complicate things, many of the al-Ahmars are members of the Islah Party. The al-Ahmar Godfather, Sheikh Abdullah al-Ahmar, was the head of the Islah Party. Now, Islah are commonly known in Yemen to be the ‘Muslim Brotherhood’ party. A Muslim Brotherhood group that is led by a Shia? Absurd. But one led by a ‘Zaydi’? Or at least one who isn’t that doctrinally strict? Not so absurd. And by painting the Houthis as ‘Twelvers’, it is easy for Islah/Ahmars to paint themselves as the defenders of Yemen (and Zaydism) against foreign ideas.

It’s complicated, is the best way to put it, and to really understand the nuances of the Yemeni religious scene you need to have studied all the different religious schools for years, and then the politics on top of that. Just remember, it might be tempting to simply use the Sunni-Shia or Iran-Saudi binary, but any analysis that simply looks at it through that prism is bound to be extremely lacking. Such a flawed discourse adds to the miseries of common Sunni and Shia Muslims of Yemen as both groups continue to suffer at the hands of Al-Qaeda (Takfiris) and Salafis.

The Houthis preach a semi-Shia’a, semi-Sunni revivalist doctrine and have been engaged in an on-again, off-again war with the Yemeni state since 2005. Al-Qaida (Salafis), meanwhile, has ties to some ­leaders of al-Islah, who the Houthis are opposing. An Al Qaeda / Salafi suicide bomb attack in Sanaa’s busy central square during a Houthis rally last month killed at least 43 people and was the first sign of al-Qaida’s retaliation against the Houthis’ advancement. Though the militant group has been attacking the Yemeni military with more ferocity since Hadi’s leadership began, this was first time they targeted Yemeni civilians in a bombing.

However, events in Yemen cannot be reduced to a simple Sunni-versus-Shia binary because they are rooted in historical conflicts of family and tribe, and a larger poulation of Yemen against the encroachment of Saudi Salafis and Al-Qaeda and a corrupt government. Houthis militias have expanded southward from the capital and entered territory that is controlled by al-Qaida. The ensuing hostilities have killed dozens of fighters and at least 10 civilians, according to reports. “The average Yemeni is not scared of the Houthis’ military checkpoints. But the average Yemeni is scared of the suicide bombings,” says Sarah Jamal, a Sanaa-based independent researcher. “When we hear news on the radio that the Houthis are battling al-Qaida in the countryside, people’s first reaction in Sana’a is to worry that al-Qaida is going to get us back here in the city.”

Saleh’s government started to break apart in early 2011, as a result of the protest movement. The US and other Western governments became concerned that al-Qaida could take advantage of the ensuing chaos. During months of political negotiations, Western diplomats negotiated for Saleh to step down. Hadi was installed in power in early 2012. Saleh was meanwhile granted immunity and has lived in Sana’a ever since, consolidating power among his former allies, and, reportedly, stealing expensive wares from his former presidential palace.

Meanwhile, Hadi had little political strength aside from the backing of the Western governments and United Nations who installed him in power.

“We don’t have a clear understanding at this point about their intentions,” said the US State Department spokesperson Jen Psaki in a recent press conference about the Houthis advancement. “Obviously, we continue to encourage all the parties to implement fully all of the provisions of the Peace and National Partnership Agreement,” she said, referring to the treaty struck between Hadi and the Houthis after the militia’s takeover of Sana’a.

slogan is “Death to America! Death to Israel!” Yet, they are also staunch ­enemies of ­al-Qaida. On one hand, US President Barack Obama’s top counter-terrorism advisor called Hadi after the Houthis takeover and strongly condemned the rebel group “who have resorted to violence to disrupt Yemen’s peaceful transition and threaten the country’s stability”. Yet on the other, a US drone struck an al-Qaida stronghold in southern Yemen last month, just as the Houthis were moving to fight the militants in the same area. “The Houthis have done in a few weeks what the US and Yemeni military has not been able to do,” the official said. 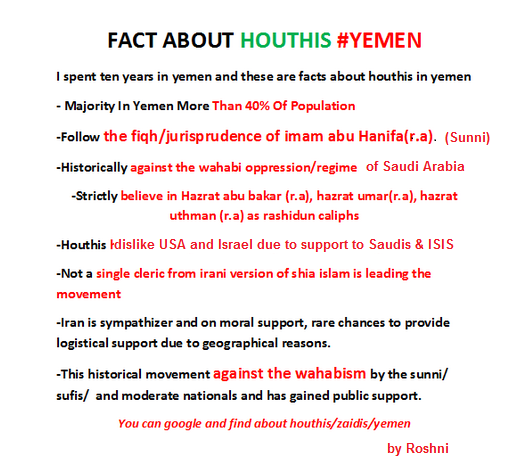 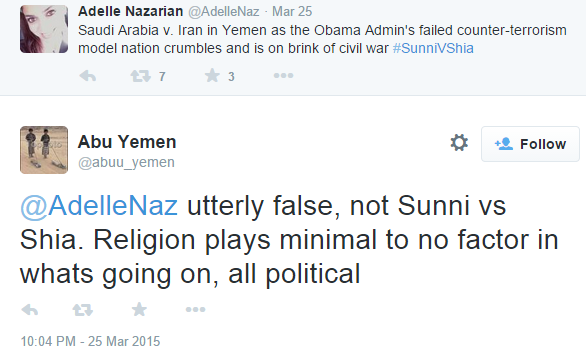 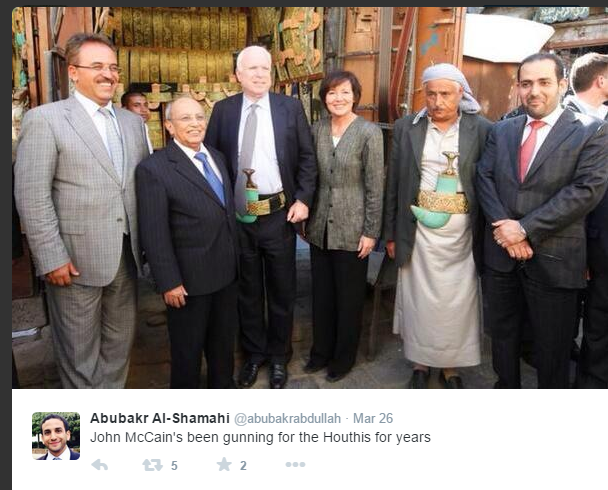 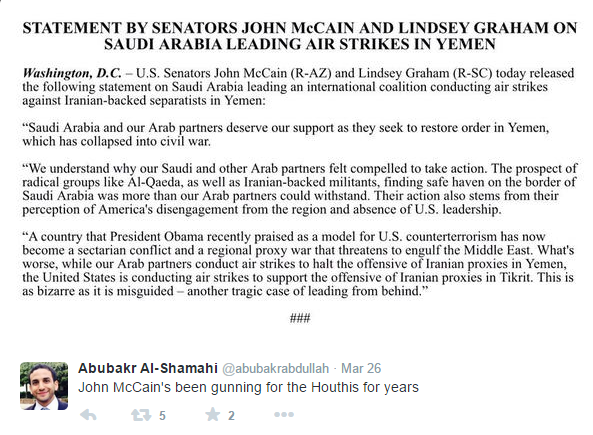 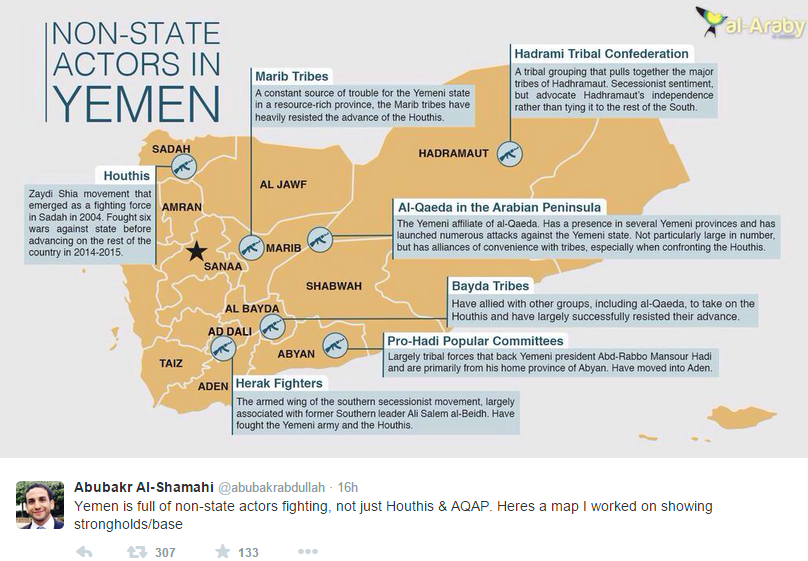 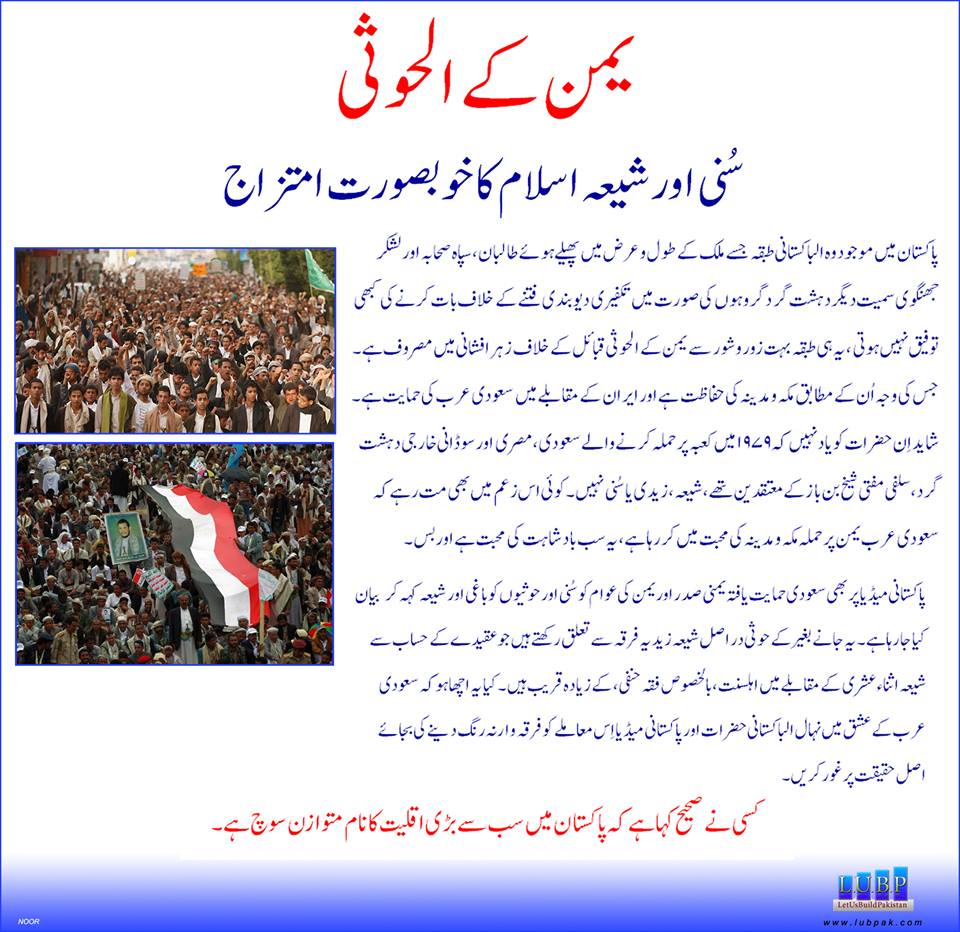