Home  »  Humour & Satire • Original Articles   »   “Security is Not the business of the State!” – by Syed Riaz Malik Hajjaji

March 23, 2015 is the Day we celebrate the Dangerous Duffer Deobandi alliance. This alliance was created in 1948 and since then, Pakistani has lost not just half of its physical terroritary, it has also gained Strategic Depth – in the form of the Taliban takeover of vast areas of present day Pakistan. 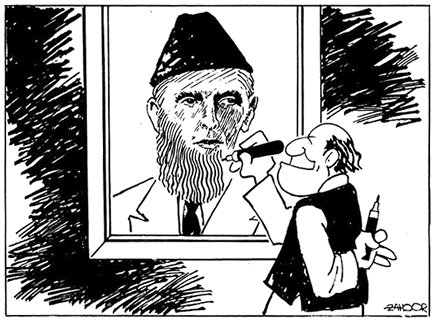 For the rest of Pakistan.

Today, you are all Deobandi Al-Bakistanis.

If you show Unity, Faith and Discipline in the vision of Two Nation Theory founder – who else but my Daddy Hajjaji Bin Yousuf – You are well well on your way to the Totalitarian Fascism that was Afghanistan 1996-2001, Mosul 2014-Present and Nigeria under Boko Haram.

When those who ask me if Al Bakistan will be a secular or theocratic State, I tell you Pakistan will not be ruled by Priests with a Divine mission – just semi-literate Deobandi Qaris with AK-47s.

Pakistan will be based on the Golden principles of Salafism – as dictated by Medieval polemicists like Ibne Taymiyah, Shah Walliullah, Abdul Wahab, Ashraf Thanvi, Nanotvi and Sirhindi”.  –Hajjaji riffing on Jinnah

Bakistanis, Jamaatis and Sahabas, lend me your Burqas!

I come to bury Non-Believers, not live in peace with them.

Hajjaji’s Re-write of the Gettysburg Address By Abraham Lincoln

On this glorious day, four-score and seven years ago, my Sugar Daddies decided to hijack the discourse and re-dedicate it to the proposition that all MEN are Not Created Equal. And that Women are best kept Indoors.

that we here highly resolve that these dead Shall have died in vain and that it is Biddah to remember then unless of course its OBL. —that this nation, under Allah, shall have a new birth of Fascism—and that government of the Generals, by the Judiciary, for billionaire politicians, shall perish its neighbours from this Earth.