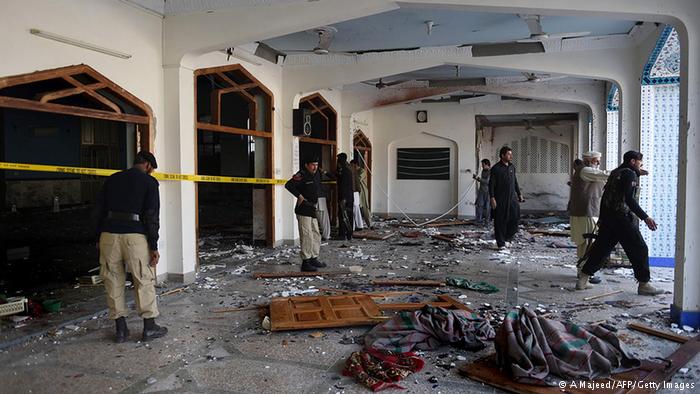 Conflicts between the Islamic Republic’s Sunni Deobandi and Shiite Muslim groups have increased in brutality, frequency and mortality over the past several years. According to a Middle East Institute (MEI) report, approximately 2,300 people have died in the country’s four main provinces and some 1,500 people have lost their lives in the tribal area of the Kurram Agency since 2007. Prominent members of both the Sunni and Shiite groups have fallen victim to the violence in nearly every main city in Pakistan.

The suicide bomb attacks on Shiite mosques of the past few weeks – which claimed the lives of more than 80 people – are being viewed by many as the deadliest sectarian incidents to have hit the South Asian country in over two years. They come as the Pakistani army has intensified efforts to fight militant groups following the Peshawar school attacks last December which left over 150 dead – most of them were children.

In a DW interview, Arif Rafiq, Pakistan analyst and author of the MEI report, talks about the reasons behind the sectarian conflict. The expert argues that while sectarianism has become mainstreamed in nearly all regions of Pakistan, the country is far from being divided on sectarian lines in the way Iraq and Syria have been.

Rafiq: ‘The Pakistani government has largely failed to stem the tide of sectarian violence’

DW: What has triggered the latest round of sectarian violence in Pakistan?

The latest round of sectarian violence in Pakistan is merely a continuation of the targeting of Shiite Muslims by various militant groups who are mainly from the Sunni sub-sect known as the Deobandis. They are one of three main Sunni subsects in Pakistan. The largest Sunni sub-sect, the Barelvis, is not in conflict with the Shiites and, in fact, increasingly cooperates with them on political issues.

And so it’s important that we identify this as not a Sunni-Shiite conflict, but a conflict between Sunni Deobandi and Shiite Muslims – with Shiite civilians bearing the brunt of the violence.

In recent weeks, Shiites have been targeted by Lashkar-e Jhangvi (LeJ), Jundullah, and a faction of the Tehreek-e Taliban Pakistan (TTP). Some of these militant groups may focus on killing Shiites, while others may focus on targeting the Pakistani state.

But as a former senior Pakistani law enforcement official told me, the natural fallback position of most Sunni Deobandi militant groups – when other targets are unavailable – is anti-Shiite violence.

What has been at the core of the surge in sectarian violence in Pakistan since 2007?

There are multiple zones of Sunni Deobandi-Shiite sectarian violence in Pakistan and each arena has its own set of causes and networks behind the violence.

Afghanistan faces a new threat after the departure of international troops from the country: a growing “Islamic State” presence. But is it a real threat or just played up by local officials to attract Western attention? (11.02.2015)

Talibanization has been the main causal factor behind anti-Shiite violence in the Kurram Agency near Afghanistan and the southern port city of Karachi. Shiites there resisted Talibanization, and the Pakistani Taliban sought to pummel them into submission.

With respect to Karachi, the TTP initially used the city for financing, logistics, and rest. But when it decided to engage in violence in the city, TTP terrorists – including militants absorbed from existing Sunni Deobandi networks – attacked Shiite neighborhoods and processions with mass casualty attacks.

In Balochistan, what we’ve seen is the indigenization of Sunni Deobandi militancy there with possible assistance from both anti-state Baloch separatists as well as elements of the Pakistani state.

But more specifically, the uptick in violence there can be attributed to the escape of LeJ commanders from a Quetta prison in suspicious circumstances. LeJ commanders Usman Kurd and Dawood Badini led a viscous campaign against Shiites in Balochistan – especially ethnic Hazaras – that verges on ethnic and religious cleansing.

Who exactly are the networks behind the clashes?

The main groups behind the anti-Shiite violence in Pakistan are Sunni Deobandi militant groups – namely Lashkar-e Jhangvi and the Tehreek-e Taliban Pakistan.

But with the establishment of an “IS” group in Pakistan’s Federally Administered Tribal Areas, we may see Salafi jihadists like “IS” take part in anti-Shiite violence, especially in the Kurram Agency.

While reiterating that the greatest victims of this conflict are Shiite civilians, it must be noted that there are also active Shiite militant networks in Pakistan. Their violence has been reactive and largely restricted to targeting radicals and militants.

But in some instances, Shiite militant networks have gone beyond the regular tit-for-tat, engaging in violence that has exacerbated the sectarian conflict.

What does the TPP expect to gain by targeting Shiite mosques?

Shiites are easy targets for the TTP. If they cannot target the security forces, Shiites are the next best target for them. TTP militants also believe Shiites are disbelievers worthy of being killed. They exaggerate the extent of Shiite influence in Pakistan, often describing the army and government as Shiite or pro-Shiite.

What is the Pakistani government’s position on this and how has it handled the situation?

The Pakistani government has largely failed to stem the tide of sectarian violence. That is not to say that the Pakistani federal and provincial governments have done nothing to prevent the killings of Shiites. The federal and provincial security forces provide security for Shiite processions, close off the border to prevent attacks during Shiite holy days, and have killed and arrested LeJ terrorists.

But at the same time, as one hand of the Pakistani state fights the LeJ and other terrorists, the other hand engages in deals with their political affiliates, such as the Ahl-e Sunnat Wal Jammat (ASWJ) group.

Politicians from most major political parties, especially the ruling Pakistan Muslim League – Nawaz Sharif’s party, are guilty of engaging in electoral deals with the ASWJ, despite the group’s public declaration that Shiite s are infidels.

And it’s unclear whether the military regards anti-Shiite militant networks as great of a threat to Pakistan as expressly anti-state groups like the TTP. So the Pakistani state, in so much as we can regard it as a singular entity, lacks moral and strategic clarity when it comes to sectarian militancy.

Despite the good faith efforts of many elements within the Pakistani state to counter sectarian terrorists, the phenomenon will continue until the top civilian and military leadership confronts it unambiguously.

What can be done to role back the tide?

While sectarianism has become mainstreamed in nearly all regions of Pakistan, the country is far from being divided on sectarian lines in the way Iraq and Syria have been. By confronting the ideas and networks behind sectarian violence, the Pakistani state has the capacity to reverse its tide.

Provincial and local officials should enforce existing laws that empower it to curb hate speech and incitement and limit the movement of individuals on terrorist watch lists. The political leadership at the federal and provincial levels must bring radical Sunni Deobandi and Shiite leaders together, getting them to agree to a code of conduct.

The security services should continue operations against the LeJ and TTP in both the border regions with Afghanistan as well as in urban areas across in the country. And above all, the state must do no harm.

The military as well as civilian politicians need to ease out of partnerships with groups that foment hate toward Shiites and other minorities in the country. The longer Pakistan’s leaders continue to directly or indirectly aid hate groups, the longer it will be struggling to put out the fires started with its own hands.

Pakistan expert Arif Rafiq is president of Vizier Consulting, LLC and author of a new report on the resurgence of sectarian violence in Pakistan, titled “Sunni Deobandi-Shi`i Sectarian Violence in Pakistan. Explaining the Resurgence Since 2007.”