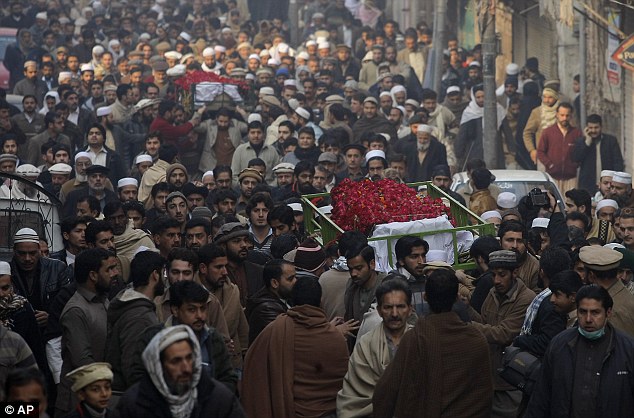 It is a fact that in South Asia, no other ethnic group has suffered more than innocent Pashtuns, of Sunni, Shia and non-Muslim backgrounds, at the hands of takfiri terrorists and their local and international sponsors.

However, despite the fact that thousands of Pashtun men, women and children have lost their lives, Pashtun leaders, elders and scholars have been unable to present an honest, clear and coherent discourse on terrorism and how this menace could be eradicated from Pashtun lands in Pakistan and Afghanistan.

In particular, ‎Pashtuns‬ need to develop a clear discourse on how US-Saudi-ISI radicalized them by using Deobandi takfiri ideology for strategic jihadist purposes in Afghanistan and Kashmir.

While some Pashtun activists and scholars legitimately criticize Pakistan army, they become very vague or silent when it comes to clear condemnation of ‪Deobandi‬ ideology, its inherent violent nature and its further exploitation as a useful tool not only by the ISI but also by the CIA and Saudi Arabia.

There is a tendency in Pashtun scholars to use generic words in their discourse eg Mullah, Islamist, terrorists, madrassas etc because these generic terms help in hiding and obfuscating the common Deobandi and ASWJ-TTP identity of terrorists who are killing Pashtuns and other ethnic groups. Such generic bashing of Islam, mullahs and madrassahs hides the fact that most potent forms of resistance against Deobandi and Salafi takfiri terrorism are the Sunni Sufi/Barelvi and Shia clerics and madrassas. Parachinar is a living example where thousands of Shias and Sunni Sufis sacrificed their lives to protect Kurram Agency from takfiri Deobandi terrorist aka TTP-ASWJ. Such generic bashing of mullahs and Islam in general hides the fact that it was none else than Bacha Khan who introduced and sponsored Deobandi madrassas in Pashtun areas. But this objectivity and integrity is lacking in the dominant and populist Pashtun discourse.

Pashtun scholars and activists fail to acknowledge that it is only Deobandi Pashtun clerics, madrassas and tribal leaders who, due to ideological, political or economic gains, embraced the takfiri Deobandi jihadist ideology. In contrast, Shia and Sunni Sufi/Barelvi Pashtuns (eg of Parachinar) strongly condemned and resisted any attempts by Pakistan army or international players to be a part of or support the so called Jihad.

That’s where 99.99% of Pashtun nationalists become unclear and dishonest. They keep finding faults with others and outsiders instead of taking stock of how Deobandism (not Sunni Sufis, Shias or Islam in general) has ruined noble Pashtun traditions from within. None of them refers to a grave mistake by Bacha Khan who was one of the earliest sponsors and importers of the Deobaband madrassas in Pashtun areas.

It is therefore no surprise that many Pashtun progressive activists or nationalists remain mute or very vague when it comes to clear condemnation of ASWJ or Deobandi terrorists who are massacring innocent Pashtun men, women and children.

For example, when ANP was ruling KP, what exactly did it do to save Pashtuns from those terrorists who ANP doesn’t dare to name.

ANP doesn’t have guts to CLEARLY name and condemn ‪Deobandi‬ takfiris or ‪‎ASWJ‬ terrorists but is brave enough to condemn Pakistan army. Irony anyone?

What exactly is the difference between the Bannu jailbreak and the D.I.Khan jailbreak?

In fact, ANP govt acted as a silent acomplice when Deobandi Pashtuns of TTP-ASWJ were massacring innocent Shia and Sunni Sufi/Barelvi Pashtuns of Parachinar, Hangu and Kohat.

It is a fact that most of the Deobandi, Taliban and Sipah-e-Sahaba (ASWJ) web sites use similar words and pictures such as Na Pak Army, Pashtun genocide etc to vent their anger against Pakistan army but remain mute on inherent violent nature of Deobandi cult and its integral role in the transnational Salafi-Wahhabi-Deobandi network of terror.

Entire Pakistani nation including Sunni and Shias, Christians, Ahmadis, Hindus, women, men, children need to be prepared, armed and trained to confront and defeat the takfiri Deobandi khawarij of Taliban (TTP) and Sipah-e-Sahab (ASWJ). Only Deobandi takfiris of JUI, JI, ASWJ and their progressive Deobandi Pashtun comrades (fake liberals) are opposing this policy and preparedness of the Pakistani nation.

Only a few days ago (Jan 2015), Deobandi Pashtuns attacked a Christian school in Bannu, Pakistan. Secular Pashtuns of ANP, PKMAP etc are too afraid to CLEARLY mention and condemn ASWJ or ‪‎Deobandi‬ terrorists. But they are brave enough to CLEARLY condemn Pakistan army and ISI.

In Karachi, ANP paved way for Doebandi Pashtun terrorists of TTP-ASWJ who in turn started killing secular Pashtuns in addition to Mohajirs, Sunni Sufis and Shias.