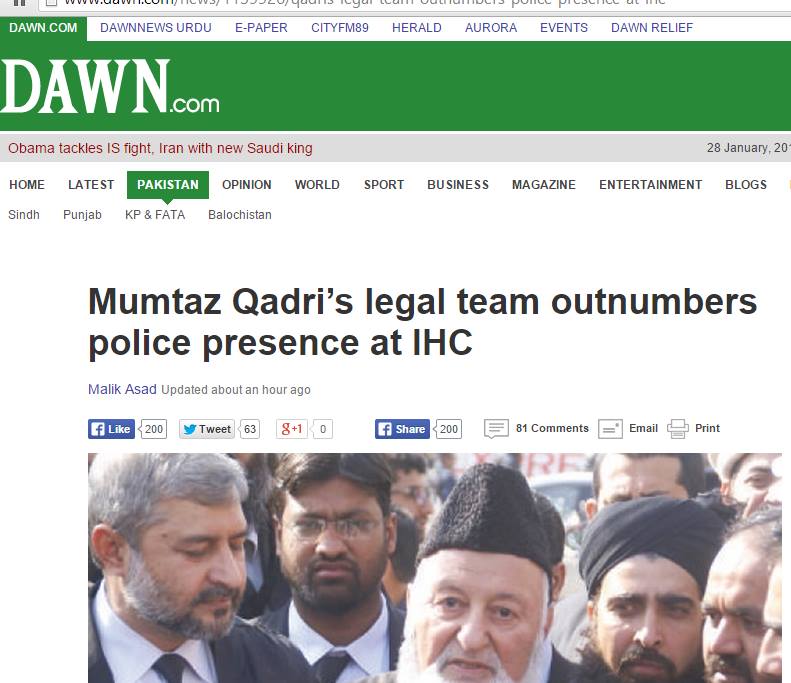 At least 90 lawyers, most of them sympathizers of PMLN, Jamaat-e-Islmai and Sipah-e-Sahaba (ASWJ), are a part of the legal team defending Salmaan Taseer’s murderer. Previously the same group and their political affiliates (PMLN, JI, ASWJ) were united for the restoration of the pro-Taliban Chief Justice Iftikhar Chaudhry Deobandi. Now they want to save Mumtaz Lanati, the murderer of Salmaan Taseer.

At least 90 lawyers came to court to defend Mumtaz Qadri, while over 300 of his supporters gathered outside court premises to egg him on.

The men were carrying placards and shouting slogans in favour of the slain governor’s assassin.

This was still a marked decrease from the last time. When the case was heard in 2011, at least 3,000 of his supporters gathered outside the courts.

Khawaja Mohammad Sharif, the head of the legal defense panel, is a known loyalist of PM Nawaz Sharif and CM Shahbaz Sharif. It may be noted that a PMLN-leader Ebad Dogar Deobandi had announced a reward of Rs. 10 million for anyone who would kill Salmaan Taseer, bait that was taken by Mumtaz Hussain who belongs to a Deobandi family of Rawalpindi.

A security official deployed at the IHC told Dawn that three reserves consisting of 20 policemen each had been deployed inside and outside the IHC building.

In addition, lawyers sympathetic to Qadri were standing in groups in different parts of the IHC building, discussing the possible outcome of the case as well as establishment of military courts to try terrorism suspects.

The focus of attention, however, was Advocate Yasir Shakeel. A lookalike of IHC Justice Shaukat Aziz Siddiqui, Shakeel was the one who had kissed Mumtaz Qadri when he appeared before an anti-terrorism court in 2011. After Justice Siddiqui was appointed IHC judge, a photograph of Shakeel kissing Qadri was circulated on the social media and portrayed as a Pakistani judge kissing a convicted terrorist.

Lawyer who kissed Qadri remains centre of attention
Advocate Shakeel is also an office-bearer of the Namoos-i-Risalat Forum, which urges lawyers to appear in court to show support for Qadri.

During the hearing, federal government counsel Barrister Jahangir Khan Jadoon demanded that the court take action against a private television channel that had aired programmes against Justice Siddiqui on the basis of the fake photo.

The bench, however, remarked that it was for them to decide what action might be taken.

Justice Siddiqui, who is a member of the bench hearing the case, said that the channel in question had tendered an apology and the issue should not be dragged on.

Nadeem Shah, a Rawalpindi-based lawyer, said that many lawyers could not join them because the date for the hearing of the appeal was fixed quite suddenly. Had there been sufficient time, the number of lawyers would have been much larger, he said.

Rao Abdul Rahim, another member of the Namoos-i-Risalat Forum, said that Qadri was not a terrorist and the lawyers present had voluntarily gathered to support him.

During Tuesday’s proceedings, the small courtroom was packed with the lawyers. The odd one out among them was a staunch Pakistan People’s Party (PPP) activist. But when asked, he told Dawn: “I am here to campaign for the upcoming IHC bar elections.”

Advocate Ubaid Shah, another Qadri supporter, said it was his good fortune to be appearing in this case.

After the proceedings, most of the lawyers gathered in the cafeteria. They were drawing parallels between Ghazi Ilam Din and Mumtaz Qadri. Ilam Din had killed a book publisher named Mahashay Rajpal for publishing a book that supposedly offended Muslim religious values.

In addition to Qadri sympathisers, there were some lawyers sympathetic towards the aggrieved Taseer family who were criticising Qadri for appealing his conviction.