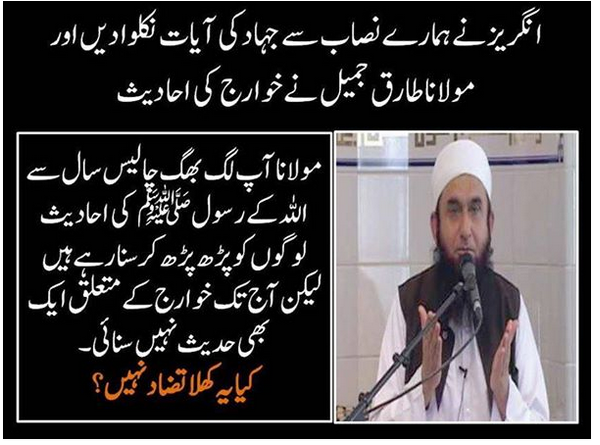 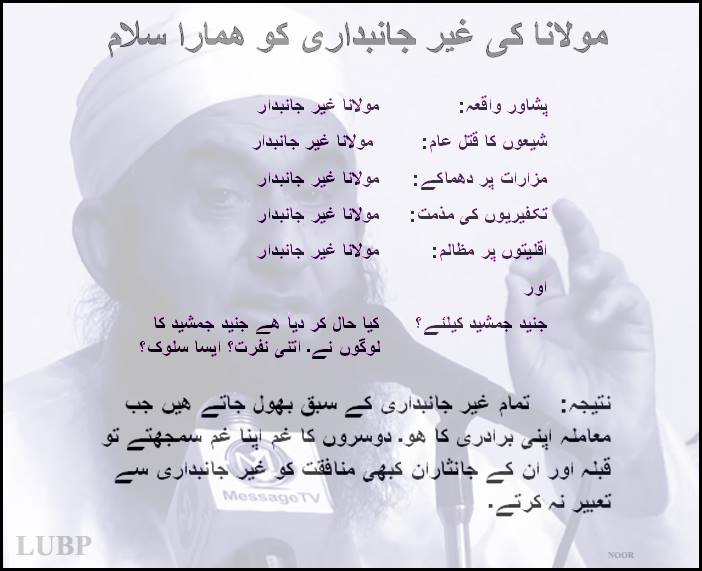 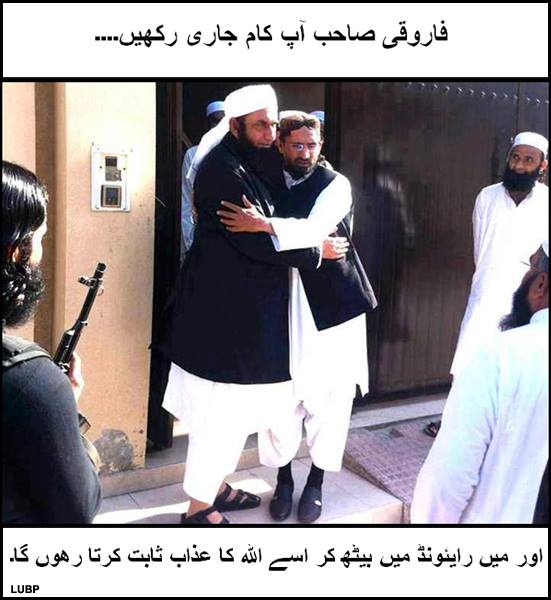 So, Mr. Tariq Jameel, you can do Gustakhi e Rasul (sm) and insult the faith of billion Muslims and want to destroy the Gumbad e Khizra and Rauza Paak like Khawarij do in Pakistan, Syria and Iraq but you cannot call TTP as Khawarij ?? What “Islam” do you preach?

We had warned that we will attack all those Mullahs who will remain silent on Takfiri Khawarij. You remain silent on TTP (and its various affiliates ASWJ, LeJ etc) but are dare to say that Rauza Pak of Sayyadi Rasul Allah should be destroyed? Astaghfurullah!

There are followers of Tariq Jameel who are completely missing the point of my post.

Understand the reason of the post. We want him to speak against Khawarij. He can defend JJ against blasphemy, talk about destroying Gumbad e Khizra BUT is deaf, dumb and blind agaist Kharji TTP. Why? ask him and then let him reply. his followers should stay silent. we will block all such idiots who defend him and he stays silent.

Anyone who claims to be a scholar, alim, opinion maker — if he supports Khawarij and Mushriks OR stay silent, then we will humiliate him…. Tariq Jameel is a strong opinon maker. All Khawarij of takfiri Deobandi orientation respect him. He MUST speak or he is an enemy of Rasul Allah (sm) !! We dont give a damn what you think of him. you can unlike this page a million times but anyone who stays silent when Mushrikeen are killing Ummat e Rasul (sm) is an enemy of the Ummah NOT a Alim e Haq. we will attack him and Allah will humiliate him.. By Allah, this will happen like this..

Tomorrow, when the silence of Tariq Jameel and Mullahs like him get your family killed at the hands of Khawarij, then dont come to me crying that you were right, he should have called TTP as Khawarij. All Khawarij listen to him and that is why it is absolutely necessary to have his clear opinion on this matter. His silence is criminal and will get your families and our children killed. NO Muslim scholar can stay silent else he is a Zalim.

Khawarij are alive because they get support from Mullahs like Tariq Jameel, Mufti Naeem, Fazlu, Samee and Munawwar Hasan. They are the criminals and have blood on their hands.

Now you will know the reason why Khawarij, Mushrikeen and Ulama e soo are sent upon us as azaab and punishment. The followers of Tariq Jameel and other likeminded followers of Tablighi Jamaat are angry that I posted a provocative video but they are happy that he is silent on the greatest fitnah of end times — the Khawarij, the army of Dajjal and Mushrikeen !! Innalillahe inna ilehe rajeoon. Quran speaks of such people who have made their Alims as their gods and follow them blindly, even if they drag them to hell…

These blind followers will NEVER question TJ that why is he silent or the greatest enemies of Ummah and Pakistan. But they are angry that I have made a demand from him…
you deserve Khawarij.. you deserve fear that you cannot send your children to schools, you deserve Mushrikeen punihsing you for worshipping your petty gods..

What khidmat TJ or his jamaat has done to defend Pakistan against Khawarij, Mushrikeen, BLA, MQM, jamhooriat…. CIA, Zionists, Riba banks.. ???? has he damaged the enemies? has he defended Pakistan ? He has surely defended the Khawarij alright… by his silence.. When has he prepared you for Ghazwa e Hind ?? When has he talked about fitnah e Khawarij ?? what Islam he teaches ?????
This is the time for Salahuddin and Jihad, NOT tableegh when Ummah is being decimated by invading Crusaders, Mushrikeen, Khawarij and Zionists…. Imagine, if army of Salahuddin had gone to Tableegh when Crusaders were attacking Jerusalem ???

As Iqbal said “these idiots fell into Sajda, when time for Qiyam came” !!!

I tried to avoid destroying Tariq Jameel totally but his stupid followers are forcing me now to expose his video properly. This is the full video from which the clip was taken. Watch it with open heart and eyes and ears.

What TJ is saying is:

1. Gumbad e Khizrah is Haraam and should not be there.
2. King Abdul Aziz was a great King.
3. He captured Makka and Medina.
4. They destroyed all Muqamat in Jannat ul Baqee.
5. They wanted to destroy Gumbad e Khizra but Muslims all over the world got very angry and worried and decided to talk to Saudis.
6. Allama Shabbir gave the argument that “this is not the time to destroy the Gumbad e Khizra” based on a Hadees that people have newly become Muslims and they may not understand and this might create problems, so after some time, this job of destroying Gumbad e Khizra can be done, but should not be done now….
7. So, the King agreed and delayed the destruction of Gumbad e Khizra…. till the time they become strong enough to do that..

Now, it is clear from the video that TJ is fully supportive of destroying the greem dome.
It is clear that he fully support King Aziz and calls him a pious king, despite the fact that he destroyed Ottomon empire with the help of Lawrence of Arabia and slaughtered thousands of Turks in Makka and Medina. TJ uses the word “Fatah Kia” !! means won it through war.. war against whom? Muslims?

This is an extremely provocative and dangerous speech of TJ. He can make such speeches which can hurt the feelings of a billion Muslims but he cannot hurt the feelings of Khawarij? Now you tell, did I quote him out of context or those who are defending him aretotal idiots?

We will discuss about destroying the Green donme and Rauza Pak later. Billion Muslims and Sayyadi Rasul Allah (sm) himself wants it as it is today and has been for 1400 years but, as I said, shall give you evidence later.

Lets first talk about issues which are undisputed within the Ummah in the present times and even with little knpowledge can underdtand them. lets see what TJ and Tableeghi jamaat has to say about the following:

1. Khawarij and their war against Pakistan.
2. Ghazwa e Hind.
3. Destruction of Muslim lands at the hands of Mushrikeen, Zionists, Afghanistan, Syria and Iraq and need for Jihad.
4. Charlie Hebdo attacks.
5. Riba and Banking systems.. which is a war with Rasul Allah.
In these times of war, JIhad and fitnah, if any Muslim scholar does not have firm and solid opinion on these 5 issues, then remember, he is a shaitan in the dress of a Momin.
Pl show me statements of Tableeghi Jamaat and TJ on these 5 issues.

Societies are destroyed when Ulama become corrupt, not because when ordinary people are Jahil. Khawarij have risen today because Ulama are too afraid or partners in their crime. There is absolutely NO excuse for any alim to stay silent in these times. This is the azaab on this Ummah — the Ulama who remained silent in times of Kufr, zulm and shirk..

For the last 29 years, I am associated with various militant groups in the region — due to my role in Jihad in Afghanistan & then professionally due to my role as a Defense analyst. I know this for sure that all militant organizaitons send their recruits for training in Tableeghi Jamaat and also find recruits from here. Mlitants of all sectarian and TTP gangs spend at least 40 days in Chilla and then go to the military camp for training. This is a massive underworld crime network run by the Khawarj and sectarian gangs. That is why it is absolutely MUST that Tableeghi Jamaat explain their position towards Khawarij. Their silence is delebrate. It is not just about TJ. Entire Tableeghi Jamaat is involved in this business.

For an alim, it is haram to stay silent in times of great confusions and fitnahs when Deen of Rasul Allah (sm) is threatened and exploited by the Khawarij. Imam Malik had his arms taken out, Imam Hanbal was beaten till death… but these great scholars NEVER stopped telling the truth in times of fitnah to save the Ummah from confusion. Khawarij are using Quran and sunnah’s false interpretation to attack Ummat e Rasul (sm). They belong to the party of Tableeghi Jamaat, Fazal, Samee and Mufti Naeem and what does these Mullahs do ?? They decide to stay silent…. Deen can go to hell… !! Innalillahe Inna ilehe rajeoon…. Blood of Muslims is on their hands.. History and the angels are noting this down carefully..

You can abuse me as much as you want but that will NOT change the fact that these scholars betrayed the Ummah in these times..

There can only be two reasons why these scholars are silent over the war crimes of Khawarij, despite the fact that Sayyadi Rasul Allah (sm) has graded Khawarij as worse than Mushriks, Kuffar and Munafiqeen, calling them dogs of hell !! Such harsh words are not used for any other Kafirs… The reasons can be

1. Either these scholars are part of Khawarij.
2. Or they are afraid because many scholars have been killed once good Ulama gave fatwas against them.

In either case, an alim who is part of Khawarij or who is afraid is not worth his existence. Ulama e Haq are NEVER afraid, never compromise, never surrender.. 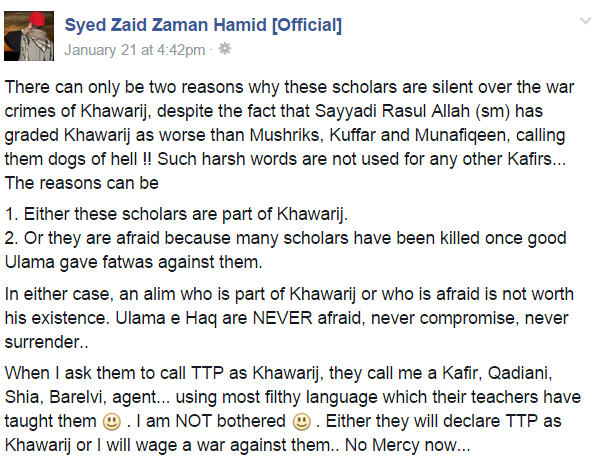 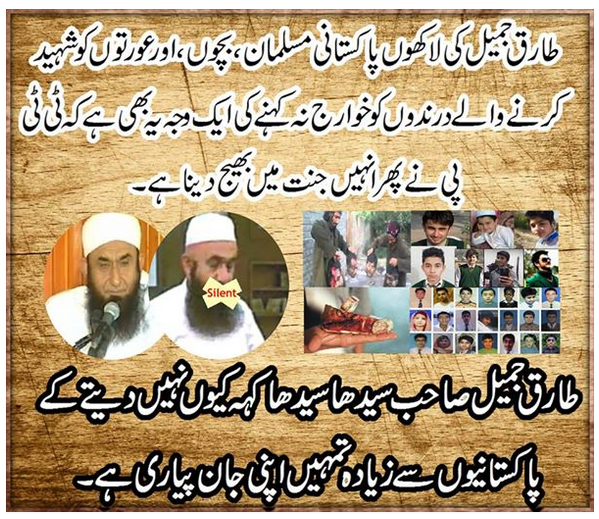 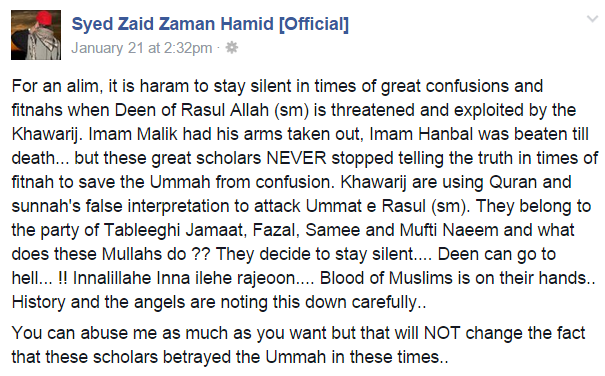 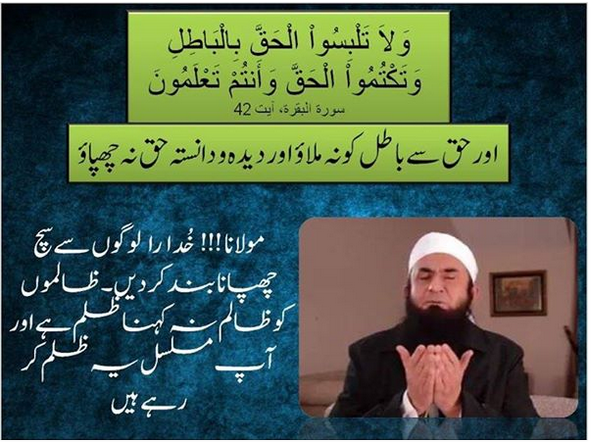 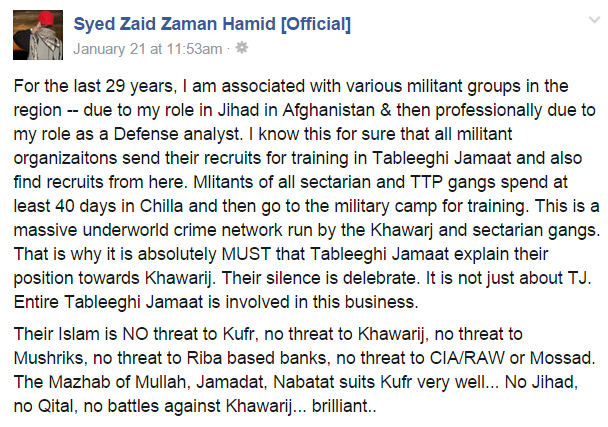 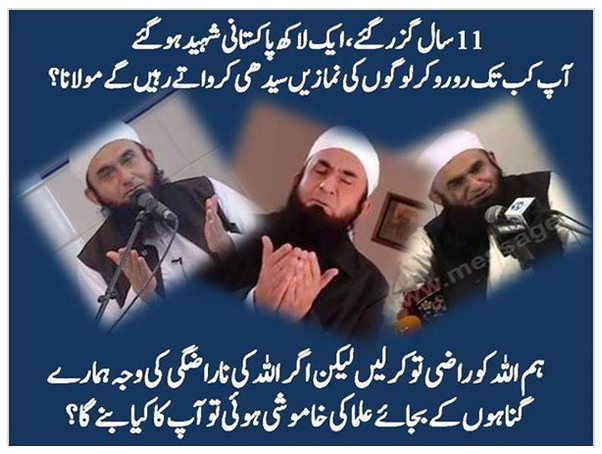 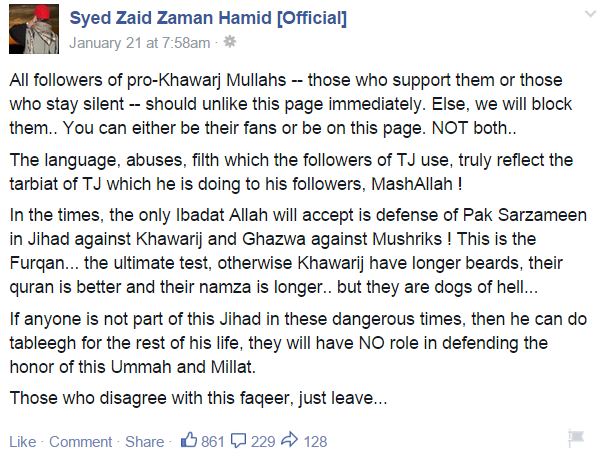 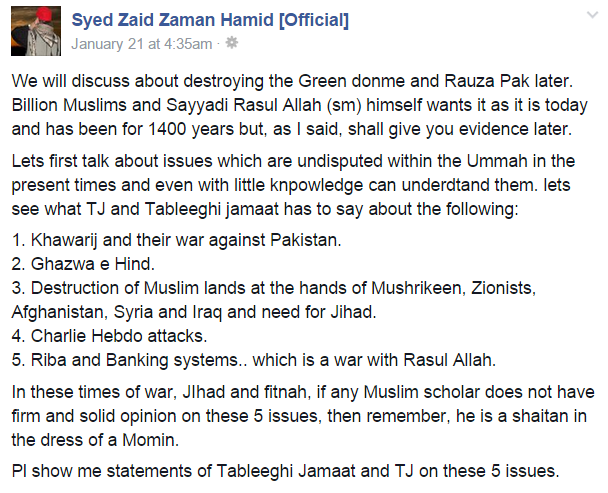 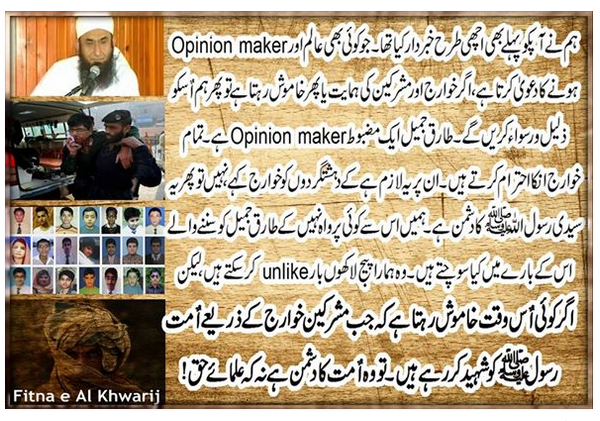 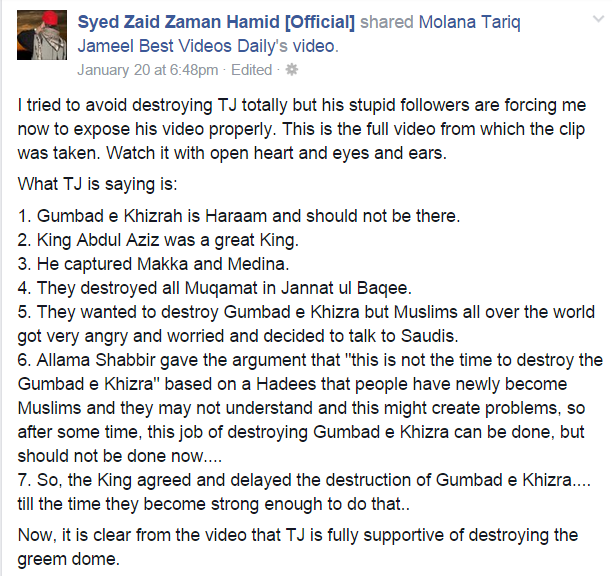 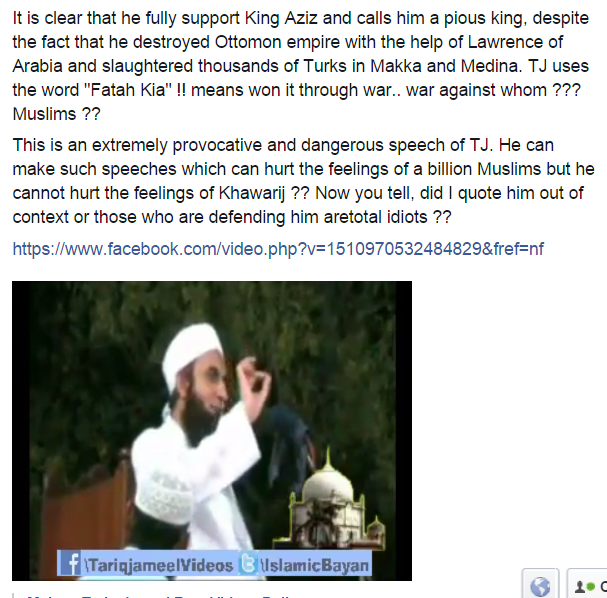 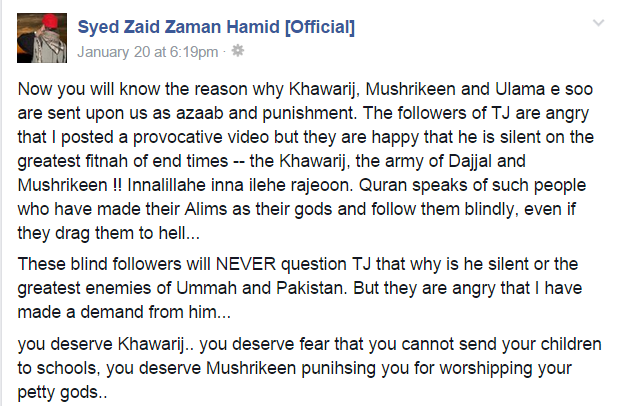 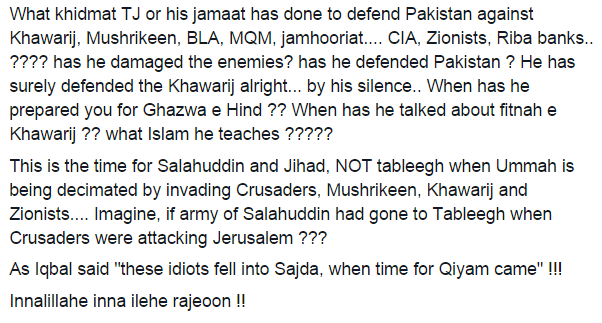 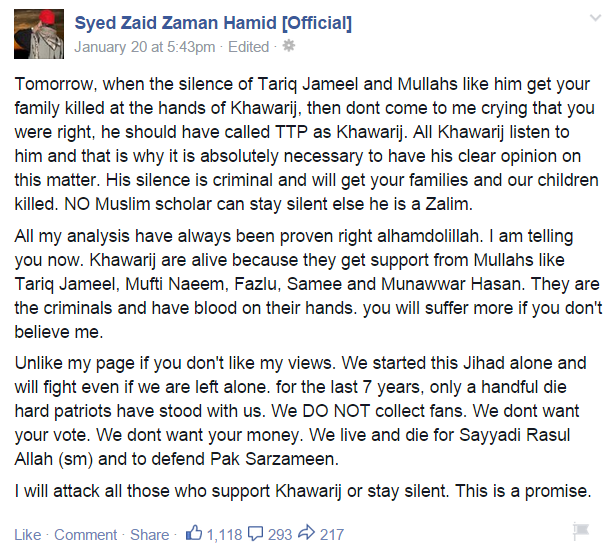 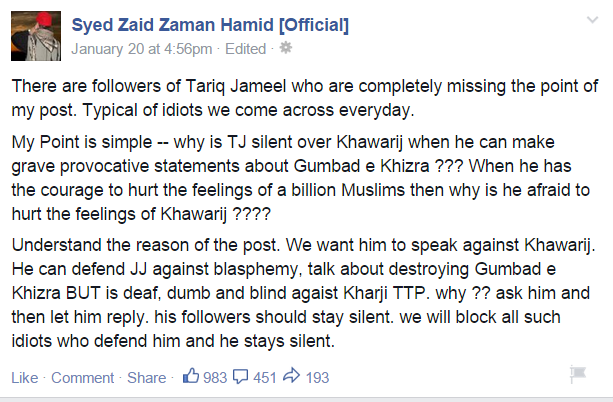 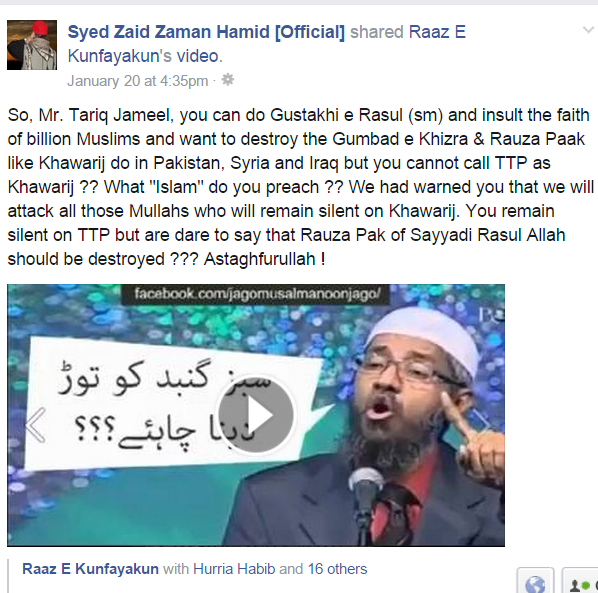