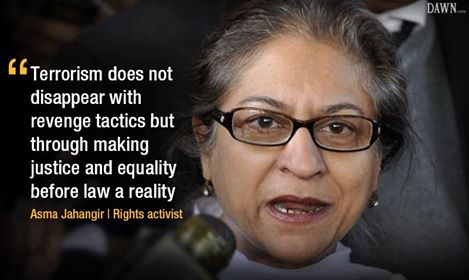 I agree. Those mass murderers from Deobandi groups like ASWJ-LeJ and the Taliban who kill Sunni Barelvis, Shias, Sufis, Ahmadis and Christians and then boast about it in the “independent judiciary” of Asma Jehangir should be showered with rose petals and freed immediately. As per Civil Society logic, undergoing punishment for such crimes as mass murder is “revenge”. I am so glad that Asma Jehangir saves her passion for advocating for ASWJ-LeJ instead of condemning them

Mass murderers should cool their heels in comfortable jail cells instead of being the “victims” of “revenge” like capital punishment while Asma Jehangir’s clients like the Taliban/ASWJ-LeJ patrons, the Sharif brothers give these terrorists a Stipend from the Punjab government from Pakistan tax payer money. They should wait it out while Supreme Court Judges like former CJP Rana Iftikhar Chaudhary, Justice Jawad S Khawaja and Justice Asif Khosa drag their trials so that eye witnesses against them can be “disposed off”. Similarly, their prior convictions can be overturned on such “weak evidence” as boastful press conferences where such killers boast about killing 100 Ahmadis or Shias – for which of course, they should not be hanged for as that would just be “revenge”.

Meanwhile, ASWJ-LeJ allies like Maulana Tahir Ashrafi – who is also an ally of Civil Society of which society Asma Jehangir is a leading star of – will negotiate their release with Generals like former COAS General Kiyani. If that does not work, the good old fashioned jail break and export to the FSA in Syria is a always an option. “World Leaders” like the Saudi kings will always foot the airfare for these mass murderers who should not face the dead penalty in Pakistan as that would be “revenge”.

In a related note, Fydor Dostoevsky after hearing Asma Jehangir has renamed his novel to “Crime and Rose Petal Showers-because-Punishment-is-so-revenge”