I ask all pro-Pakistan “Deobandis” to resign from Deoband, stop calling yourself as Deobandi and come on the side of Pakistan openly – Zaid Hamid 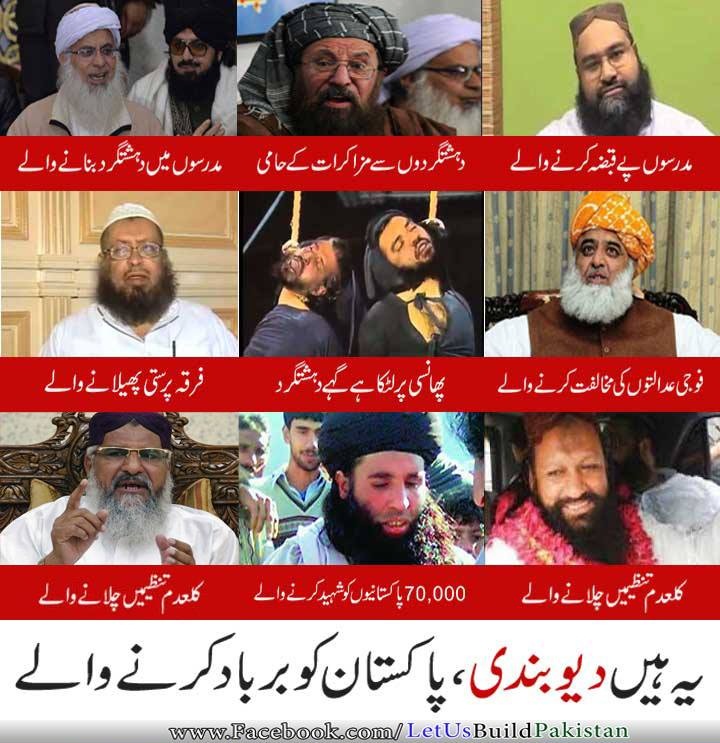 In this post, I want to clarify one point. Deoband is NOT a sect within Muslims. It is only a school. [We can call it a violent mutation within a minority in the Hanafi sub-sect of the Sunni sect of Islam.]

All those who call themselves as Deobandis are Muslims, Sunnis and Hanafis.

All those who call themselves as Barelvis are also Muslims, Sunnis and Hanafis.

So, if someone stop calling themselves as Deobanids, he will remain a Muslim, a Sunni and a Hanafi. Calling yourself Deobandis is NOT part of Islam, Imaan, Fiqh or sect.

We dont care about the Aqeeda (beliefs) of Deobandis or any other sect. Allah will deal with them there. Our disagreement is on the political and military policies of that school which is Deoband.

Politically and militarily, Deoband [Darul Uloom Deoband and its affiliated clerics and madrassas] are defenders of Mushriks and Khawarij. They opposed Pakistan, they still support Mushriks and they support Khawarij. Mushriks use Deoband to attack Pakistan and kill our children.

So, what should all good “Deobandis” do? They should do what Ashraf Ali Thanvi did and Allama Shabbir ahmed Usmani did. Once both these top Deobandi scholars knew that their Darul Uloom is now fully supporting the Mushriks against Muslims, both of them resigned from Deoband and supported Pakistan movement.

Today, I ask all pro-Pakistan “deobandis” to resign from Deoband, stop calling yourself as Deobandi and come on the side of Pakistan openly. By resigning from deoband, you will remain a Muslim, Sunni and Hanafi. Nothing will change except that on the day of judgement, you will not stand in the company of Fazl-ur-Rehman, Sami ul Haq, Naeem, Fazlullah, Hakeem ullah Mahsud and Mangal Bagh, Ludhyanvi and also Gandhi, Nehru and other Mushriks — because that’s where all Deoband will stand as they were with them in dunya, so they will be with them in akhira!

Choose your sides.. We are with Sayyadi Rasul Allah (sm), Khulfa e Rashideen and Pakistan in dunya and inshAllah in akhira also.

Pakistan’s top Deobandi cleric Fazl ur Rehman’s father Mufti Mehmood had said about themselves that that Deobandis were not part the “Sin” of creating Pakistan! Now his rascal son says they are not part of the “sin”of defending Pakistan !! Innalillahe inna ilehe rajeoon!

Why should we not wage a war against these Khawarij and Mushrik supporters?

Then they say why we take the name of Deobandis ! All Mullahs from deoband have taken out their daggers against military courts to protect their Khawarij dogs of hell. Council of Islamic Ideology (CII) is led by a JUI leader (Deobandi) who is now going to give a fatwa that Military Courts aganst Khawarij are Haram. He remains silent when his Kharji brother Fazlullah owns the killing of our children and promises to do more attacks! Astaghfurullah.

Mufti Naeem, Fazl ur Rehman, Samee ul Haq, Shirani, Tahir Ashrafi and Tariq Jameel are all openly supporting the TTP-SSP-LeJ Khawarij either by silence and NOT calling them Khawarij or by attacking the Military courts. This is the entire leadership of Deoband in Pakistan! Now you understand what that Mushrik Aji Kumar Doval said about Deoband!

We will be very harsh on them now for this treason with ummat e Rasul (sm)!

One response to “I ask all pro-Pakistan “Deobandis” to resign from Deoband, stop calling yourself as Deobandi and come on the side of Pakistan openly – Zaid Hamid”