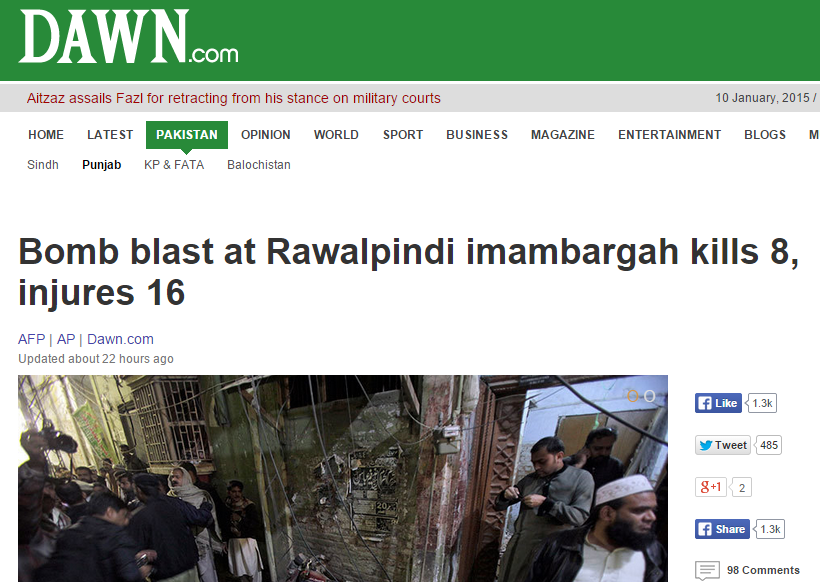 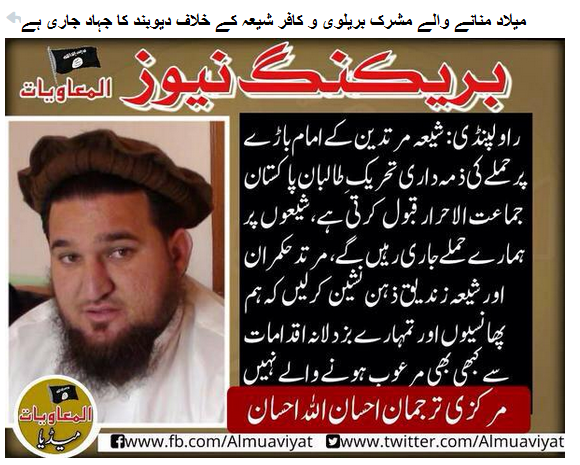 This proves a number of things.

First, the massacre in Paris cannot be attributed to generic Muslim approach to violence because the same people who massacre Christians and Jews in the name of blasphemy also massacre Sunni Sufis, Barelvis and Shias due to differences of sect. In Pakistan alone, 80,000 innocent people of all faiths and sects have been massacred by Deobandi terrorists. There’s no precedence of similar violence by Sunni Sufis/Barelvis, Shias, Ahmadis, Christians etc.

Second, from Libya to Bahrain, Syria to Pakistan, Iraq to Europe and Nigeria to North America, it is the transnational Wahhabi/Salafi and Deobandi terrorists who are massacing innocent Christians, Jews, Muslims (Sunni Sufi and Shia) along with other persecuted groups. (On 31 Dec 2014, at least 33 Shia and Sunni Sufi Muslims celebrating the Milad were massacred in Yemen by Wahhabi Deobandi terrorists.)

Third, it is none else than the West itself which has enabled the transnational Wahhabi Salafi and Deobandi terrorism by investing in their Jihadist operations in Syria, Afghanistan and Libya for short-term strategic purposes.

On 9 January 2015, Deobandi terrorist group Sipah-e-Sahaba (aka ASWJ-LeJ) attacked a Shia mosque in Rawalpindi where hundred of Shias and Sunni Sufis were celebrating the birthday (Mila or Maulid) of Holy Prophet (peace be upon him). At least eight Shia and Sunni Sufi Muslims were killed in the Deobandi suicide attack.

It was a suicide attack on the Imambargah Aun Mohammad Rizvi in Chatian Hatian area of Rawalpindi. The Shia Muslim congregants were commemorating Eid Miladun Nabi (the Holy Prophet’s birthday) when they were targeted in this terrorist act. Some Sunni Sufis too were present as they too pay equal reverence to Milad.

Only a few days before the Milad massacre in Rawalpindi, a bomb targeting Shias at a volleyball match in the Lower Orakzai Agency killed at least five people and injured 10 Shia Muslims. The incident happened at the Hussaini ground, owned by the local Shia community in the Kalaya neighbourhood of the Orakzai tribal district.

Deobandi Pashtuns including those who claim to be liberal, secular or leftist (eg Bushra Gohar and others of ANP) remain tight lipped on Shia genocide and take extra care to remove or hide the Deobandi ASWJ identity of terrorists.

Scores of Shia doctors, traders, businessmen and shopkeepers have already been killed since the start of 2015 in various targeted attacks by the Deobandi militants of ASWJ-LeJ. Just 3 days ago, several Shia youth were killed in Hangu when their volleyball match was targeted by the Deobandi terrorist group, the Taliban!

Will Raza Rabbani cry for the victims of Shia Genocide? Will Asma Jahangir finally criticise her client, PM Nawaz Sharif and her Judiciary for continuously releasing convicted Deobandi terrorists of ASWJ-LeJ.

Will Pakistan’s Civil Society and elitist liberals take a rally to protest this act?

None of these things are likely to happen. Civil Society will continue to obfuscate this situation using various underhand tactics such as blaming the Shia victims and placing them in the same category as ISIS-affiliated terrorist group ASWJ-LeJ.