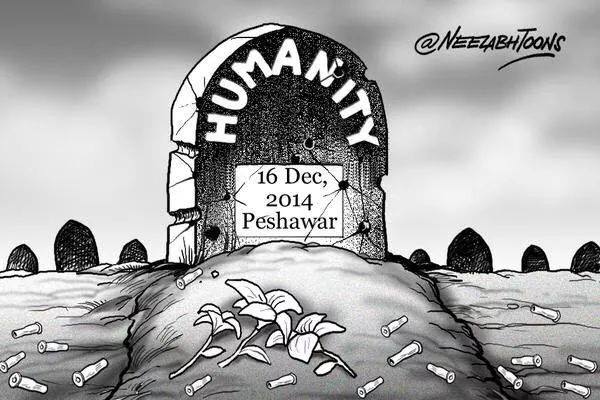 Today a Pakistani professional, seemingly progressive, honest, practicing Muslim and perhaps intellectual was heard condemning the hideous act of slaughter of 134 children. I asked him does he know why this occurred?

He answered foreign funded terrorist did this. I asked him why? He said because they are being manipulated by foreign countries. I said but these terrorist were Muslims and they have been at it for years.

He said they are not Muslims, they are animals. This is not Islam and Islam does not endorse this. So what is the problem in this conversation? Is the truth obfuscated?

There are two explanations floating in the Pakistani Nation. One is denial and the second is supporting the terrorist with partial condemnation of this killing.

Good honest Muslims have refused to recognize  the problem. By failing to recognize this, they have actually become enablers of the Islamic ideology of a Deobandi sub-sect within Sunni Muslims,  the root cause of the slaughter of 130 children.

Foreign countries funding these terrorist is the ubiquitous and unfortunately conventional wisdom. Sure, that may be true but the facts are deeper.

The buzz word of terrorists is thrown around, foreign hand comes into the picture but problem is much deeper. This prevalent conventional wisdom of denial by educated Muslims in Pakistan and outside Pakistan about the agenda of these terrorist working for their Islamic cause is simply disgusting, stupid and appalling.

It’s a denial perhaps of fear of acknowledgement of one’s own misguided and misunderstood Islam (due to kinship of same faith) thus subconsciously refusing to accept the real culprit of extreme Islamic ideology.

Because these terrorist are simply Jihadists and are working for their cause of (misdirected) Islam. Problem is the peaceful, educated Muslims find it safe to call this terrorism but don’t see the evil behind this simply because they will find themselves believers of the same jurisprudence.

According to the interpretation of these Jihadi Muslims, what they are doing is what Allah has ordained in the cause of Islam and this is a unified accepted interpretation of Muftis and Ulamas of Deobandi school of thought. They have not been silent about this and they have not been shy of expressing this. Who in the rightful mind can deny that? Denial of this fact is the core, essence, root cause and evil that is pervasive and somehow robustly practiced.

Obfuscators and Islamist liberals are enablers of terror:

No one wants to claim that their faith is actually the same faith of these terrorist. This is a challenge Muslims are not willing to face and continue the same denial; this (unknowingly and unfortunately) makes them an enabler. The dilemma is either to expose one’s own faith or become an enabler. People choose to maintain the enabler policy as a safe haven.

Taliban have consistently claimed they are against the Western influence. On the other hand, peaceful, educated and loyal to Islam Pakistanis continue to believe these terrorist are foreign agents. 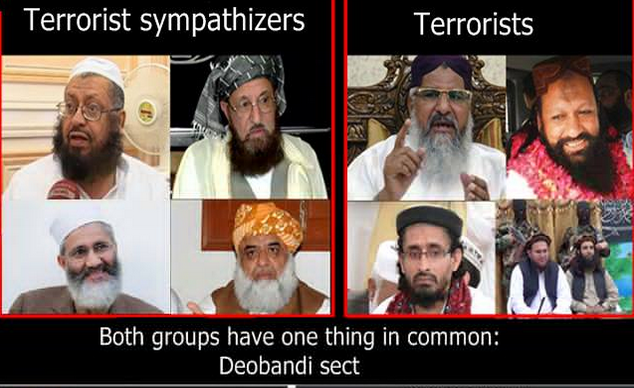 On 12 January 2002, Fazlullah became the leader of Tehreek-e-Nafaz-e-Shariat-e-Mohammadi (TNSM) and for a decade has shown pragmatic and extreme actions to establish shariah (of their version of Islam) in Swat Valley resulting in war with Pakistan’s Armed forces.

Mullah Fazllulah was allowed to establish shariah law as part of a deal which he later broke. He established a madrassah with the aid of Maulana Sami-ul-Haq in Swat. His father in Law Sufi Muhammad (the original founder of TNSM) was an active member of Jamat-e-Islami Pakistan in the 80’s. Maulana Fazulul Rahaman states his heart is beating with these Taliban terrorist.

Fazllullahs association with Maulana Sufi Muhhammad, Maulana Sami Ul Haq, Jamaat-e-Islami and other Islamic organizations are neither a secret nor a mystery.

Media explanations such of criminal mind-set, or foreign influence, poverty, lack of education are all smoke screens. One can take these terrorist out of Pakistan but the terrorism is not residing with Fazllullah or Taliban its deeply imbedded in the Deobandi School of Islamic Jurisprudence.

How long will this be denied and what will it take to acknowledge this a fact by the peaceful educated Islam loving Muslims of Pakistan. Unless this is first acknowledged and then debated all actions by the Pakistani nation will be futile.

All those who refuse to accept this, does not matter how sincerely and deeply they condemn this sad incidence of slaughter of 130 innocent children, this is only symbolic, superficial, temporary and will resolve nothing but strengthen an enabler attitude.

The Pakistani nation can accept this or not the fact is the dilemma facing the nation is not a foreign problem (the problem may be exploited by foreign hands) but a problem of judicial disposition of the Islamic interpretation of their faith.

Before Pakistan as a Nation can fight terrorism they have to first fight for thoughtful and judicial (not just honest because honest can be relative) vetting of what is their faith. If in their hearts they find righteousness in the Deobandi Jurisprudence then they are lying to themselves, their nation, their God and their brother in faith Fazllulah when they are condemning these acts of terrorism in the country.

At least Fazllulah knows what he stands for and for this he and his fellow believers are willing to give their life and take life. The rest of those who are followers of the same Jurisprudence are unfortunately worse than him because they are neither sincere to their faith and its cause nor they can claim they are against terrorism, because they are not, it’s a deceitful disposition.

Accepting a certain Islamic school of thought or jurisprudence is not a restaurant menu where one can like and accept the part one likes and reject what they feel conveniently wrong. Especially when the elders, the scholars, muftis and religious leaders who can claim they know their faith endorse this terrorist behavior and an average educated Deobandi Muslim of Pakistan cannot claim otherwise.  One cannot claim to be a Deobandi follower and reject the present terrorism at the same time because this makes the bearer of this conclusion a disguised or ignorant bigot and hypocrite.

Killing children to save Islam:

The planners of this attack are very cunning people. They knew this will get world attention, they knew Pakistanis will predictably remain lukewarm. They told their foot soldiers you have a difficult mission and must kill children for Islam. Nothing is greater than Islam so kill children for Islam. Then they will have placed an army of concocted hadith proving Prophets and Caliphs did this for Islam. This is what Islam needs and there is no greater cause than Islam. Deobandi muftis and ulema endorse all such teachings.

If the act of terrorism that killed 130 children who were shot on the face and eyes is wrong then the misguided Islamic ideology that encourages this is also wrong and Deobandism that teaches this interpretation cannot be right.  One cannot just settle by claiming this wrong and still continue to practice the same fascist Jurisprudence.

The same motive and logic (shariah) that killed 50,000 Pakistanis (which was not rebuked or chastised) cannot be suddenly considered wrong now; because somehow it’s ok to kill a human if he is over 18 years of age and it’s a severe crime if they are children. The nature of crime remains the same it’s just more hideous and worse when children are slaughtered. What about the thousands of children these Jihadis have killed for their own cause by making innocent young teenage children’s into suicide bombers. Was a child of Waziristan less important than a child of Peshawar?

We cannot be earnest in our struggle as a nation unless we first resolve who are we fighting what they are fighting for. Stop blaming others, obscuring the real cause and enabler attitude. Indeed this was a very sad incident and Pakistanis need to stop State sponsorship of violent Deobandism robustly and blatantly spearheaded by Nawaz regime and world wide patron-ship by Saudi Islam. Acknowledgement of this will be a true service to Islam.